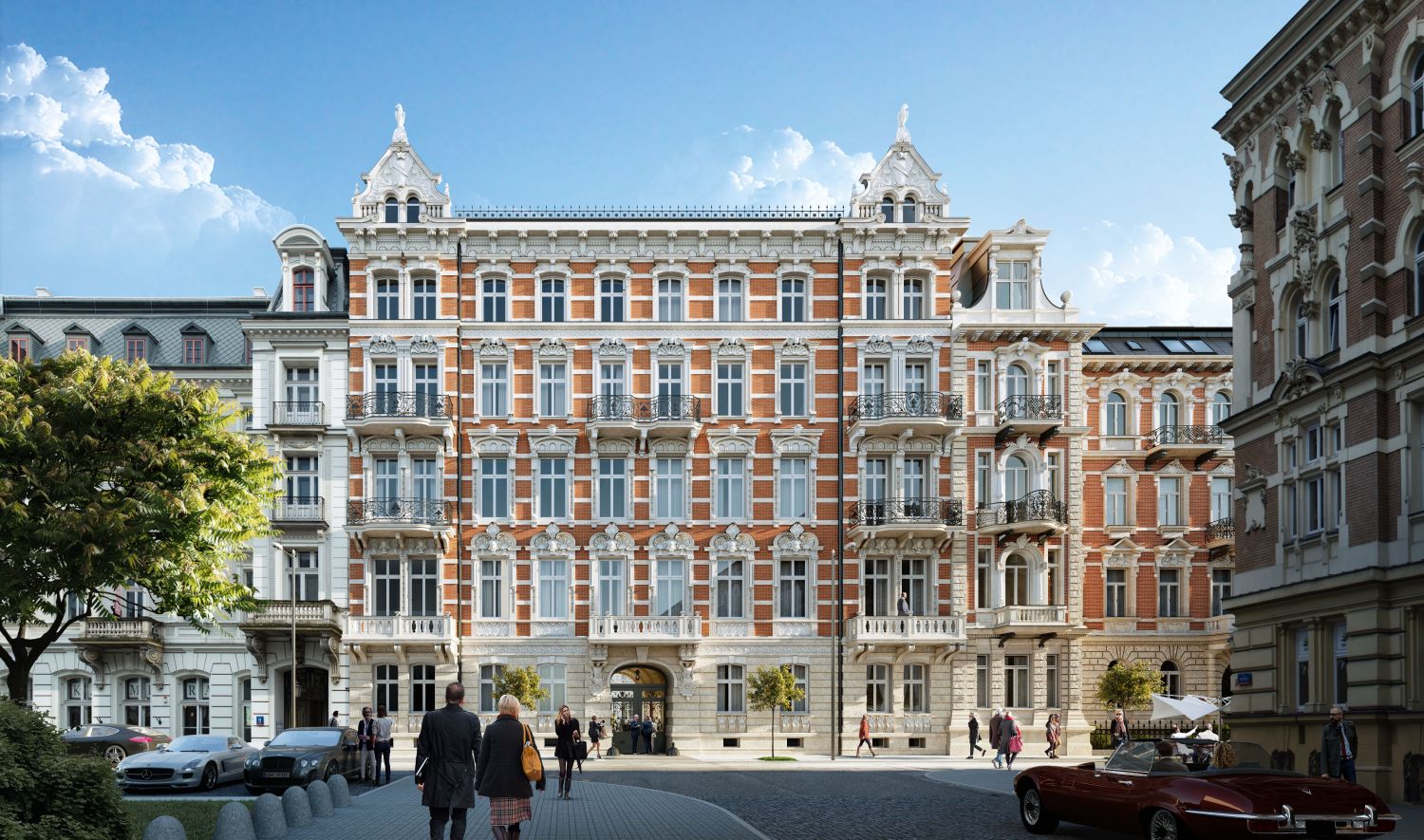 The revitalization works on two historical tenement houses at Foksal 13/15 in downtown Warsaw are gaining momentum. Recently, the construction of an underground garage for more than 60 cars has been completed. Currently the works in historical parts of the building and on rebuilding the publishing houses are pending, whereas restoration of the historical appearance of the Foksal 13 facade has been planned for next year. Completion of the investment is scheduled for mid-2019.

Foksal 13/15 is a luxury apartment investment which Ghelamco is implementing in the historical center of Warsaw. Built in the late 19th century, the tenements are being revitalized, which will allow them to regain their former character as fine downtown residences and host the most luxurious apartments in Poland.

The works on the underground parts of the building, which will provide a parking lot for 64 cars, have been completed. Ultimately, it will be equipped with a modern system of lifts and platforms, which will enable future tenants to park comfortably. So far it has been the most complicated stage of the investment in technical terms. In order to connect existing staircases with the newly built garage, the front part of the buildings have been overhang using micropile towers. It is one of the first construction projects in Poland to use this advanced technology.

“Not only are we restoring the Foksal 13/15 tenements to their former splendor, but also adapting them to today’s requirements for the most luxurious apartments. In the revitalization process we use modern technology solutions while respecting the historical fabric, which we will carefully restore,” said Jeroen van der Toolen, Managing Director CEE, Ghelamco.

Currently works on strengthening the structure of the historical Foksal 13 and 15 tenements are pending as well as on rebuilding the partly demolished publishing houses. The reconstruction of the original eclectic appearance of the Foksal 13 facade, which was lost in the 30s of the 20th century, has been planned for next year. It was then when, at the request of the then owner Jan Wedel, the front facade of the building was modernized and deprived of decorative details. The building then gained modern amenities, with the distinctive panoramic lift, the first of such type in Warsaw. According to the developer’s plans, it will also be restored.

The investment works have been underway since 2016, when the historical elements inside the tenement houses were secured. Despite the broad scope and demanding character, the construction is going as planned. The expected investment completion date is mid-2019.

The tenement houses at Foksal 13 and 15 were erected in the years 1895-1898 based on the design by Artur Otton Spitzbarth. Both back then and now, it has been one of the most prestigious addresses in Warsaw, at which Warsaw’s aristocracy and intellectuals had their palaces and apartments. In their long history, the tenements have been home to many prominent persons from the worlds of culture, science, politics and business, among others Bolesław Eiger, Stefan Napierski, Zygmunt Badowski, Kazimierz Kubala or Stanisław Grabski. In the 30s of the 20th century, tenement house no. 13 was bought by Jan Wedel, the famous Polish entrepreneur, who redeveloped it and equipped it with modern solutions, among others Warsaw’s first panoramic lift.

Both tenements, as one of the few downtown Warsaw monuments, survived the second world war, which allowed to save many authentic 19th century details. Splendid staircases are decorated with overdoors and portals, white marble floors, hand-forged balustrades, and frescos with neo-baroque motifs. Equal wealth of details can be found in the original apartments, whose interiors are nothing short of aristocratic residences. Their ceilings feature a few dozen types of facets, rose windows and strips, whereas wooden floors display nearly twenty patterns which were fashionable at the turn of the 19th and 20th centuries.

Today Foksal 13/15 tenements are regaining their former glory thanks to the engagement of top monument conservation and renovation professionals. The revitalization and restoration project was designed by architect Anna Rostowska, a prominent expert on historical architecture from Proart studio, in association with the renowned architectural studio SUD Architectes. The apartments and common parts of the building with luxurious amenities were designed by Eric Kuster, a world-renowned designer who has arranged the residences of top music, film and sport stars.

The Foksal 13/15 investment will provide its future tenants with numerous comfortable amenities, including a SPA zone with a sauna and jacuzzi, fitness room, and spacious terraces with a cocktail zone on the top floors, overlooking the vibrant center of Warsaw. A yet unseen solution will be guest rooms, intended for exclusive use of the tenants, who will be able to host their guests in comfortable conditions. The buildings will be equipped with an underground parking lot with advanced parking platforms for 64 cars. The investment’s fine character will be complemented by top-quality concierge services provided by Quintessentially Lifestyle, a global leader in this segment.