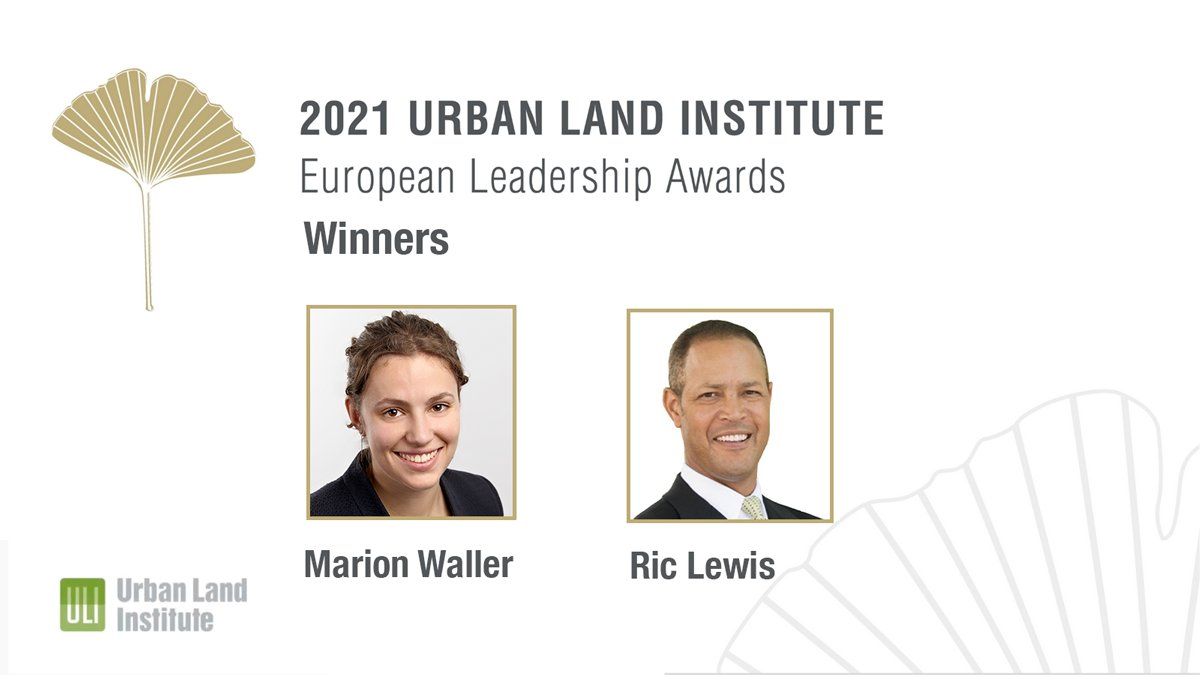 The Urban Land Institute (ULI) has announced two deserving winners of the 2021 ULI European Leadership Awards as part of its ULI Virtual Europe Conference. Ric Lewis, the founding partner of one of the leading property investment management firms in Europe, Tristan Capital Partners, has won the 2021 ULI European Leader Award, and Marion Waller, advisor to the Mayor of Paris was announced as the winner of this year’s ULI European Talent Award for real estate professionals aged 40 or under. The awards recognise industry leaders in Europe whose contributions to urban development and real estate, along with civic and social endeavours, exemplify the spirit and mission of ULI.

The ULI European Leadership Awards Chairman, François Trausch, highlighted the achievements of the winners during an online ceremony as part of the 2021 ULI Virtual Europe Conference on Tuesday 9 February.

The ULI European Leader Award winner, Ric Lewis, is a British American businessman who is widely regarded as one of the most creative and consummate professionals in the international real estate management industry. He is executive chairman and chief investment officer at Tristan Capital Partners, which has more than 140 staff across eight locations – the core team has worked together for 20 years with assets under management now totalling around €11.5 billion. He has played a pioneering role in increasing diversity, equity and inclusion in the real estate industry and ranked first in the Powerlist 2019, an annual list of the UK’s most influential people with African of Afro-Caribbean heritage.

“Ric really exemplifies the values of leadership and vision,” said Trausch, who is also CEO of Allianz Real Estate. “He has built an impressive real estate business comprising a loyal global investor base and been an inspiration for many people looking to enter the industry. His commitment to increasing diversity in real estate and helping others from less fortunate backgrounds makes him a very worthy winner of the ULI European Leader Award.”

Ric Lewis is a passionate advocate for improving less advantaged children’s access to quality education and he established The Black Heart Foundation, which has endowed more than 250 scholarships and made more than £5 million in grants and awards. He has also funded ULI UK’s UrbanPlan – an engaging and realistic classroom-based programme that teaches high school students about the forces of urban regeneration – since its inception.

“I think it’s important for me to be a role model and a trailblazer,” said Lewis. “The real estate industry does not have enough diversity, whether that’s by gender or ethnicity or background, and it’s a priority for me to demonstrate that the industry can be inclusive. It is a great honour to be recognised by my peers for winning the ULI European Leader Award and it will spur me on to even greater action – I feel like I’m just getting started.”

The online ceremony also celebrated the 2021 ULI European Talent Award, which has been won by 28-year-old Marion Waller, advisor to the Mayor of Paris – she has made a significant contribution to urban regeneration in the French capital. She previously worked as an advisor to the deputy mayor of Paris in charge of urban planning and architecture and helped deploy “Reinventing Paris”, the international call for innovative urban projects that were then exported to other European cities.

“Marion has already achieved so much at such a young age,” said Trausch. “She is well-respected by senior figures in the real estate industry from both the public and private sectors, which she has helped bring together.”

Marion Waller is a specialist of the relationship between people and the planet and has played a prominent role in urban innovations, such as the implementation of the 15-minute city in Paris. She is recognised for her academic work, as well as her career at Paris City Hall, and published her first book, Ârtefacts naturels, in 2016 about ecological restoration and the ways of reinhabiting nature.

“I love the idea of shaping the city, shaping buildings, and having a positive impact on the environment through action,” said Waller. “It’s fantastic to be recognised with the ULI European Talent Award for something which has become a great passion for me. What I would like to achieve is to continue empowering other people to help make positive change and fight for a better urban world for us all.”

ULI Europe Chairman, Marnix Galle, praised the two winners for the contributions that they have made to the industry and wider communities and said: “Ric is a leading figure in the real estate industry and has been able to combine great success with incredible generosity and warmth. He is a builder of businesses and is well known for bringing the real estate industry community together. Meanwhile, Marion has demonstrated that age is not an impediment to making a serious impact in the industry. She has managed huge urban design projects at a very young age, challenging the status quo and impressing very senior figures in real estate with her knowledge and practicality to get things done. They are both an inspiration to us all.”

The jury evaluated many nominations from the ULI Europe senior leadership for each of the awards on the basis of: vision and leadership; capability of driving innovation in real estate; the history of sustainable business models/projects; contribution to the reputation of the industry; commitment to the community; and service as a role model for younger generations.

Lisette van Doorn, ULI Europe CEO, announced as part of the online ceremony that a new award category will be included for next year’s ULI European Leadership Awards in honour of ULI Key Leader Trish Barrigan, co-founder and managing partner of Benson Elliot Capital Management, who sadly passed away last year. The ULI European Trish Barrigan Award for Diversity, Equity and Inclusion (DEI) will be awarded to an individual standing out for his or her leadership and contribution in advancing and promoting DEI in the real estate industry and the broader community in Europe.

“Trish was an inspirational leader and a role model for many in the real estate industry,” said van Doorn. “She was an incredibly generous supporter and mentor for women and the younger generations, and we want to commemorate her work in this area. She was a passionate advocate of all aspects of diversity and we believe that while Trish’s life was tragically cut short, her legacy will live on through the ULI European Leadership Awards.”