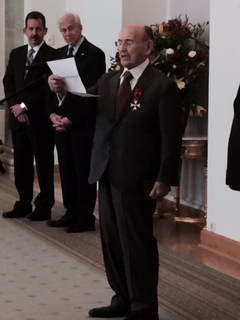 RIDA Development Corp., has announced that that their chairman and founder David Mitzner, has received the Order of Polonia Restituta in the Presidential Palace in Warsaw, Poland.

Mr. Mitzner is receiving the award in recognition of his service to the country in the years after the fall of the Soviet Bloc. He became a leader in the development and rebuilding of office, retail, and industrial infrastructure needed for the modernization of the country after decades of communist rule. Apollo-RIDA Poland, RIDA’s European subsidiary is one of the largest private real estate holders in Central Europe and has been doing business from their European headquarters in Warsaw since 1995.

“We are very proud of our chairman and founder for receiving this prestigious award. The honor is well deserved after the decades of effort that my father has invested in his country of birth,” said Ira Mitzner, President of RIDA Development.

David Mitzner, a holocaust survivor, was imprisoned for eight years in the Russian Gulag before immigrating to the United States. Ira stated further “He is the true embodiment of the American dream who later in life decided to return to Poland to help in the rebuilding of his childhood homeland. To receive such an outstanding honor is truly a reflection of all he has accomplished in his lifetime.”