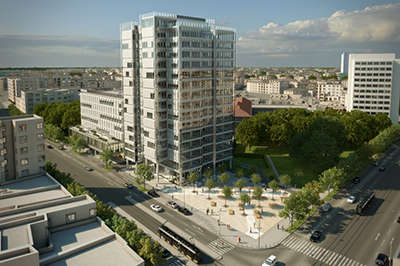 Romania is an important market for S IMMO AG’s further expansion in Southern and Eastern Europe. Two of the company’s current key projects are located in Bucharest: the development of the promising office property called THE MARK has just started, while the reconfiguration of the Sun Plaza shopping centre, started at the beginning of the year, is proceeding according to plan.

With regards to other countries within the European Union, Germany remains a key market for S IMMO AG and the company is also active on its home market Vienna.

To date, S IMMO AG invested over €200 million on the local market, including landmark developments such as Sun Plaza shopping centre and Sun Offices in the South of Bucharest and Novotel Bucharest Business Centre hotel on Calea Victoriei. In addition, the company is currently reconfiguring and expanding Sun Plaza shopping centre and started the construction of THE MARK office project in the proximity of Victoriei Square. In total, these properties represent a built area of over 250,000 sqm.

THE MARK is the first significant class A office project to be built in Bucharest CBD after a pause of approximately 10 years. The project has a total built area of 43,000 sqm and a combined GLA of approximately 25,500 sqm, comprised in two class A+ buildings. Located on the new Uranus boulevard, at the junction of Calea Grivitei and Buzesti street, THE MARK will be a new business destination in Bucharest as well as a new visual reference point in the city due to its outstanding location and innovative design approach adapted to the actual urban living.

The investment value for THE MARK is estimated at around €45 million starting with construction. The construction works started in July 2016 and are expected to be completed in the second quarter of 2018.

Opened in February 2010, Sun Plaza is the dominant shopping centre in South Bucharest, with a built area of around 200,000 sqm and a leasable area of over 80,000 sqm, managed by CBRE Romania and owned by S IMMO AG. After the remarkable performance achieved in its six years of existence, Sun Plaza took on a new challenge in 2016: a refurbishment process that will significantly improve the retail mix and shop count. The upgrading process of Sun Plaza started in the first quarter of 2016 and is expected to be completed in the first quarter of 2018. The remodelling works will bring 11,000 sqm of high-quality retail and leisure space for up to 40 new stores.

Sun Plaza is now in its third year with 100 percent occupancy and 85 percent of the additional space to be opened in 2018 is already pre-let. Moreover, Sun Plaza’s representatives expect to have the entire project fully occupied by the end of the reconfiguration process. The total investment value for Sun Plaza remodelling is estimated at €30 million.

According to Friedrich Wachernig, member of S IMMO AG’s Management Board, “Romania continues to spur a high investment potential, due to the long-term recovery of the market, the rising GDP per capita as well as the decreasing unemployment rate. S IMMO AG thus focuses on long-term developments in the country, with THE MARK and Sun Plaza projects having already started and advancing according to schedule. We are extremely optimistic for the evolution in the upcoming years.”