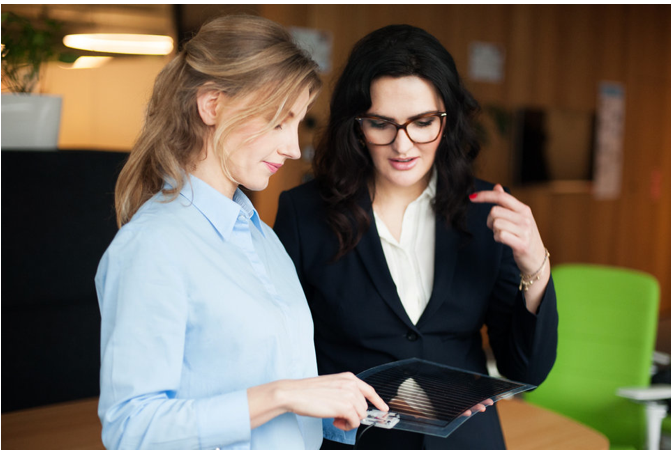 Skanska’s commercial development business unit in Central Eastern Europe will be the first developer worldwide to cover office buildings with semi-transparent perovskite solar cells on a commercial scale. This will revolutionize the approach towards energy self-sufficient buildings. Saule Technologies will be the technology provider. The initial implementation tests are planned for 2018 in Poland.

Energy independent office projects are becoming a reality thanks to perovskite technology which is ready to be integrated into building façades. Skanska will apply the test-cells onto its projects in 2018, creating a significant milestone towards zero-energy and carbon neutral office investments. The developer has exclusive rights to use Saule Technologies’ solar cell solutions, as stated in a license-based agreement signed between the two companies, in building façades and noise barriers across all Skanska markets worldwide (the Nordics, Europe and the USA). Perovskite technology means benefits for the developer, tenants and communities – favorable implementation costs, lower energy costs and consumption, and lower carbon footprints.

Perovskites are crystalline materials that have great potential to replace silicon – currently the world’s most popular semiconductor in solar cell applications. Saule Technologies has been working on the application of ink-jet printing for fabricating free-form perovskite solar modules since 2014. This technique allows the shapes and areas covered by each layer to be customized according to requirements. The stability and water resistance of the modules makes them ideal for the construction industry. The company has conducted advanced research on perovskite applications in solar energy harvesting and optoelectronics with leading international universities in the UK, Israel, Germany, Italy and Spain. With a Japanese investor on board, along with support from the Polish National Centre for Research and Development and several research grants worth more than €20 million, Saule Technologies is now working on a large-scale, prototype production line.

Perovskite solar cells offer new opportunities to architects and construction companies willing to utilize solar power. Our modules are lighter, thinner and much more design friendly than the most popular silicon solar cells. We may customize the shape, color and size of the module depending on the needs of the customer and install them wherever there is a free area on the building. This also means not being limited to the roof.

Olga Malinkiewicz, co-founder and CTO at Saule Technologies, commented: “While perovskite solar cell technology is being observed by respected giants such as NASA, Skanska has a chance to use it first to power office developments. This is the developer’s step towards making buildings carbon neutral. It is not a science-fiction vision anymore. Working with talented scientists from Saule, we are now turning fiction into reality and creating buildings which are more energy efficient and carbon neutral. Up to now this has not been possible on a large scale. Climate change is one of the biggest challenges the modern world is facing and it contributes to extreme weather events that are increasing in frequency and severity around the world. As such there is increasing legislative pressure to run businesses in a sustainable and attentive manner.”

Katarzyna Zawodna, ceo of Skanska’s commercial development business in CEE, added: “Sweden-based Skanska Group is determined to be the leading green developer and builder. The company has been a signatory to the United Nations Global Compact since 2001. In 2009, as one of the first developers in CEE, Skanska introduced LEED certification to the office market, and announced the implementation of the WELL Building Standard in 2017. Usage of perovskite solar cells for zero-energy buildings is just the latest innovation in Skanska’s sustainable building strategy.”