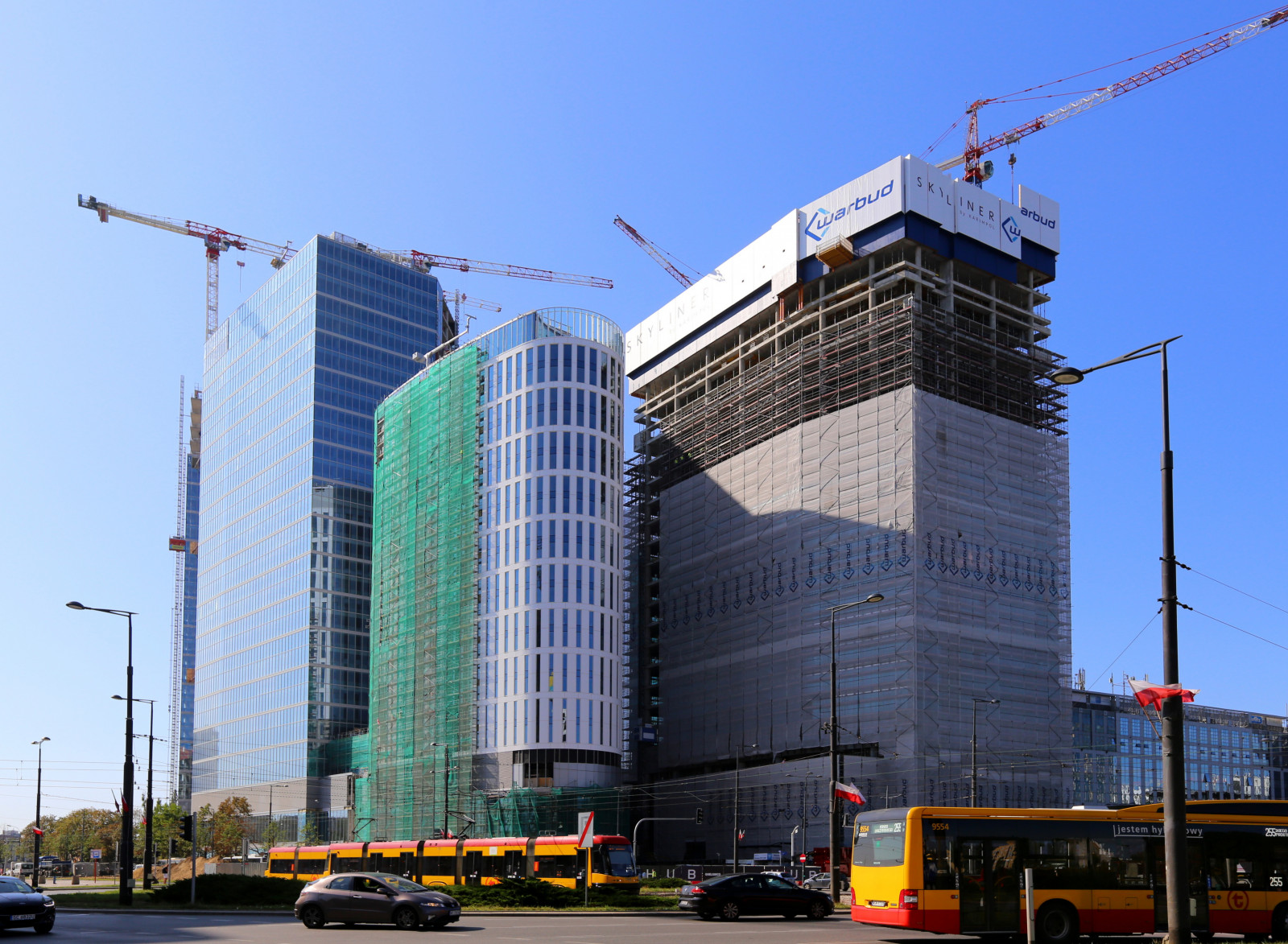 Skyliner is already halfway to the top – EuropaProperty

The works at the construction site of one of the capital’s highest skyscrapers are already halfway through. Skyliner, built by Karimpol Polska at the intersection of Towarowa and Prosta Streets, has reached the height of 109 meters. Currently, the General Contractor of the investment – Warbud company – carries out the works on the 28th out of 45 floors. The completion of the investment is planned for the end of 2020.

Skyliner is the largest investment of Karimpol Group in Central and Eastern Europe. The building will offer 43,800 sqm of the office space spread over 30 floors and 3,400 sqm of the space intended for commercial and service functions and restaurants, located on its first four floors.

“We observe the pace of works at the Skyliner site and the high quality of every detail made in this building with great satisfaction. We are already halfway through the works. There are still 90 meters up ahead of us, and another important stage – finishing the highest part of the building with a characteristic sloping roof and a glass structure,” says Jarosław Prawicki, Leasing Director at Karimpol Polska.

Warbud SA has completed the construction of a 27th floor ceiling slab. The skyscraper’s construction has reached 109 meters in height.

The works are already carried out on the eighth floor of the repeatable, upper part of the office building, above the double technical floor, which is located approximately in the middle of the structure – says Karol Puszerkiewicz, contract director at Warbud SA. The Skyliner glass facade is laid right behind the structure. We are also carrying out installation and fit out works in interiors, and we started assembly of the “low rise” group elevators in the lower part of the tower.

The author of the architectural design is the APA Wojciechowski studio.

“Skyliner is one of the key projects of our studio. It is amazing to be able to watch how the office floors are rising one after another. Soon we will enter a very important and spectacular stage of works – the construction of a two-storey skybar with 15-meter high walls and the construction of the top of the skyscraper. We have worked for a long time on the form and shape of the Skyliner’s top, creating many models and studies, which is why we are really looking forward to this stage of the works,” comments Karina Konieczny, architect at APA Wojciechowski. Now we are focusing on details related to interior design. We are building mockups, selecting specific wood colors or the density of stone grains on the floor. This stage requires great care and attention to detail. We also aim to implement new technologies related to communication and moving around the building, analyzing the amenities and new concepts available on the market. We are convinced that Skyliner will meet the expectations of all its users.”

In addition to this, having in mind the Warsaw residents, Karimpol Group is working together with Ghelamco company on creating a common public space between the two neighbouring buildings. This space will be open for the city and its inhabitants and full of attractively planned greenery.

Skyliner will have a height of 195 meters. The building’s distinctive feature will be its shape, divided into two blocks – a 16-meter high podium and a tower. The Skyliner entrance hall will be 4 stories high, glazed and surrounded by a 16 meters high colonnade. A strong architectural element of the lobby will be the so-called “Spanish stairs”, connecting the interior of the hall with the external public passage.

Skyliner is situated at Rondo Daszyńskiego in Warsaw, in the direct neighborhood of the 2nd subway line station, as well as stops of five tram lines and seven bus lines. The main building’s reception will be situated only seven meters away from the entrance to the subway station. The access to a five-storeyed underground parking lot for 428 cars will be possible from Prosta Street and from Towarowa Street. The underground parking floors will also have over 300 bicycle parking places and the changing rooms with lockers for bikers. Skyliner is rated Excellent in the BREEAM certification system.