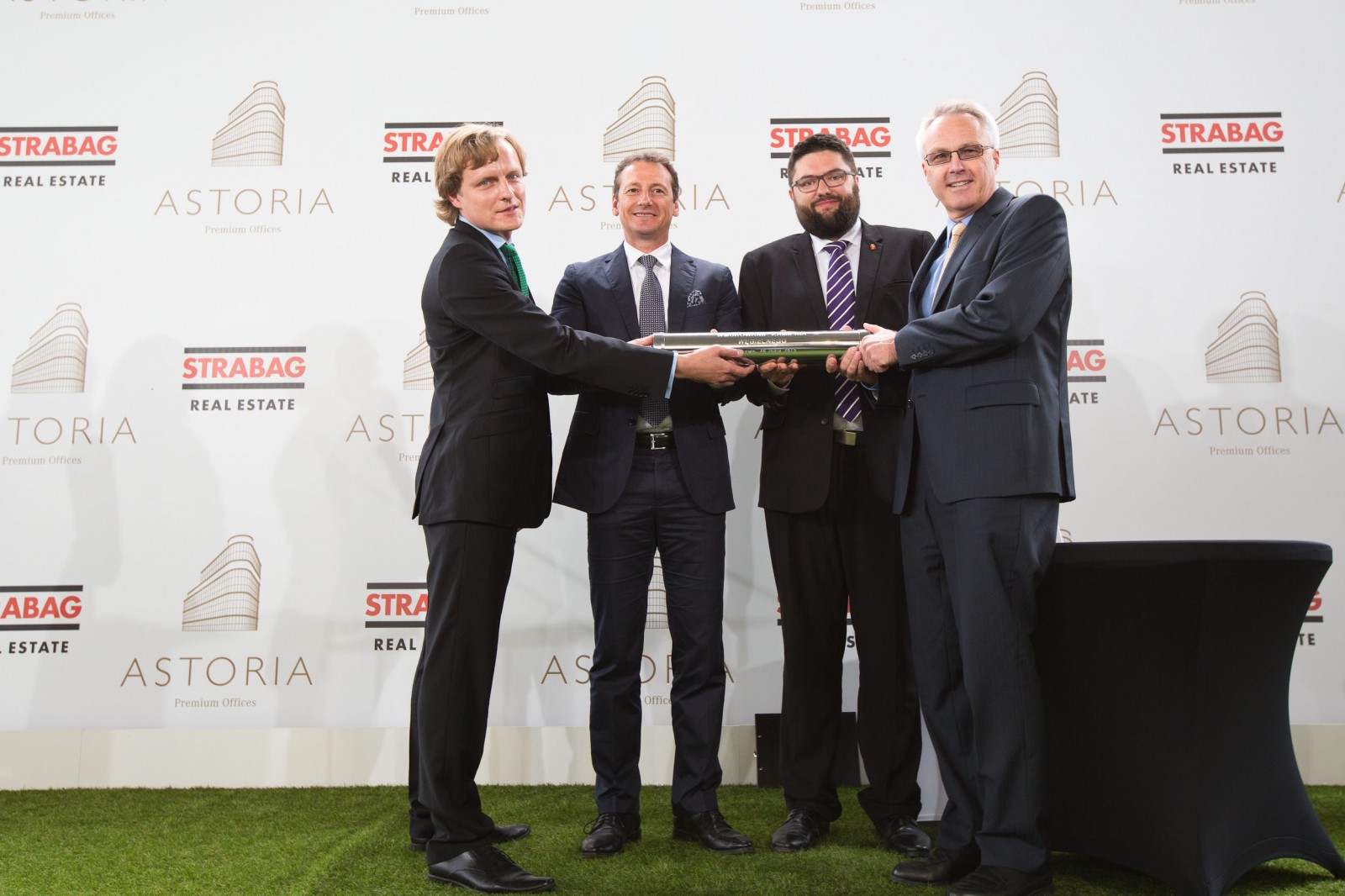 Strabag Real Estate (SRE) has celebrated the cornerstone laying ceremony to commemorate the commencement of construction of the Astoria Premium Offices building. It is the first project of SRE in Poland.

The foundation act was signed by the Vice President of the capital city of Warsaw, Jarosław Jóźwiak, Managing Director of SRE, Thomas Hohwieler, and SRE Business Unit Manager Michael Markart as well as Jarosław Pelc, Manager of the Warsaw Branch and the East of Poland District of General Contractor Strabag. The whole ceremony was held in the representative part of the building on the ground floor at the rotunda of the office building.

“With Astoria we took the first step into the Polish market and established a local project team,” said Thomas Hohwieler, SRE’s Managing Director. ”Therefore I’m very glad that we get the chance to create it at such an exceptional location and thereby contribute to the development of the city centre of Warsaw. At the same time, we hope it will be a successful start for our business in Poland, which we hope to expand in the future. In fact, we are sure that Poland will become one of our core markets in the future.”

“Astoria is a state-of-the-art, modern looking and sustainable office building. It’s façade metamorphoses seamlessly from being almost fully glazed on the side of the Palace of Culture and Science into the inner-city building with its characteristic windows in the eastern part. The building thereby complements the existing frontage of Szpitalna street and provides a continuation of the buildings situated around Warsaw Uprising Square,” added Michael Markart, the developer responsible for the project at SRE.

The building’s architectural design will be attractive thanks to new, representative facade made of high quality materials such as glass, metal and stone. Concurrently, the building will be coherent with the surrounding structures owing to the fact that style-related elements of the neighbouring buildings have been finely highlighted in the building.

The general contractor, has been carrying out construction of the office building in accordance with the assumed schedule. The 10-storey building with total area of 28,000 sqm is being built in the heart of Warsaw, in the vicinity of a business centre and the Old Town.

Public transport is easily accessible as the building is situated nearby an underground station and a Fast Urban Rail (SKM) station; accessing the facility by car is also convenient thanks to
an underground car park with almost 90 parking spaces. The project is planned to be completed in the first six months of 2016.

There will be almost 16,800 sqm of office space offered for rent in the development and 1,400 sqm of retail space as well as two representative entrance halls. Apart from a modern fit-out, the flexible and efficient office space will make it possible for the users to utilize the space in different ways, i.e. as a single-room arrangement as well as combined office rooms and as open space office.

SRE has been implementing sustainable development principles and has carried out the construction in compliance with LEED Gold certification requirements. Modern and energy-effective solutions such as LED lighting and Concrete Core Tempering system will be implemented in the building. Owing to such solutions, it is expected that operating costs in the project will be much lower than in the case of traditional properties.