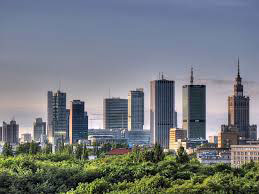 Tomasz Buras, head of office agency at Savills Poland, said: “Development activity is now much higher, in particular in the City Centre, where over 260,000 sqm of new office space is under construction, of which ca. 46 percent is to be delivered this year.”

Savills data confirms demand for offices is strong and last year’s annual letting activity reached 632,500 sqm, reflecting a 5 percent growth year-on-year. The majority of transactions were for new office space, with high percentage of pre-lease transactions. Renewals and renegotiations remained relatively low (below 30 percent), which proves that occupiers are keen to move to newer generation buildings.

Mark Freeman, head of valuation & consultancy, added: “Despite a record high total take-up, net absorption was low last year at only 155,000 sqm, nearly 20 percent below its long term average. This led to an increase in vacancy to 11.7 percent, reflecting a growth by 300 bps year-on-year.”

Savills reports, that increased development activity will lead to further growth in vacancy to ca. 14 percent by year-end 2014, assuming that the absorption will be in line with its long term average. Surprisingly, vacancy in Mokotów district, the largest Non-Central business district in Warsaw, is expected to decline from over 12 percent at the end of 2013 to ca. 8 percent at year-end 2014.

Wioleta Wojtczak, research consultant in Savills, said: “Only 28,700 sqm of new office space will be delivered in Mokotów district in 2014. This is the lowest level since 2004 and more than five times less than in 2013.”

In terms of office rents, prime headline rents are now at ca. €22.00-23.00 per sqm/month in the City Centre and ca. €14.00-14.75 per sqm/month in Non-Central locations reflecting a 14 percent and 6 percent drop year-on-year respectively. Savills anticipates that especially effective rents will be pushed down further over the next 24 months.