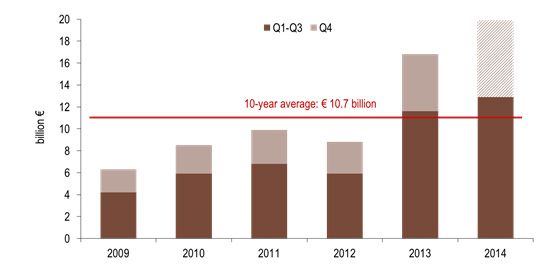 The JLL Logistics & Industrial team report that investment in the EMEA logistics and industrial sector has maintained the strong momentum seen over the last few quarters with a total of €3.6 billion invested in Q3 2014.

Underpinned by increasing allocations to the asset class, platform building and further improving debt markets, volumes were up 11 percent in the first nine months of 2014 on the equivalent period in 2013 at €12.9 billion. Q3 2014 investment volumes were down 21 percent over the previous quarter, but this can largely be attributed to a lower number of portfolio transactions that closed in Q3 and driven by a longer period needed to close this type of transactions.

Nevertheless, with €5.4 billion transacted in the first three quarters of the year, the volume of portfolio transactions remained healthy and broadly in-line with the equivalent period in 2013. Assets worth more than €1 billion were traded in portfolio transactions across Germany and the UK respectively in the first nine months of 2014, followed by France (€550 million) and Sweden (€530 million).

With factors such as the escalating online sector drawing more investors to the logistics and industrial market, JLL also observe a growing appetite for large-size single assets that is underpinned by the emergence of a new building type, the so-called mega-sheds. As a result, in 9M 2014, the number of single asset transactions over €50 million exceeded €2 billion and was up 21 percent on the equivalent period last year.

Prime logistics yields continued to compress over the quarter, with the European aggregate down 40bps year-on-year in Q3 2014 to 6.90 percent. An improving rental growth outlook and further hardening yield levels will lead to further accelerating capital value growth across the region. The European aggregate is expected to rise over 4 percent in 2014 as a whole, up from its 10-year average of 0.9 percent.

Tom Waite, Director European Capital Markets at JLL said: “As with previous quarters, we continue to see strong appetite and transaction growth in the logistics sector, and we expect this to continue towards the year end. Core European markets still drive investment volumes, but we have now seen a significant uptick in activity in CEE and growing volumes in Spain and Italy. Portfolio transactions still dominate and we continue to see demand increasing for both single country and cross border opportunities. Furthermore, international capital from pension funds, insurance groups and private equity houses continue to seek greater exposure to the sector via direct acquisitions and JV deals.”

Alexandra Tornow, Head of EMEA Logistics & Industrial Research in JLL added: “With a healthy transaction pipeline, the market will exceed FY 2013 in terms of volumes and could still be on track to get close to our full-year predictions of €20 billion. A downside risk to this remains the scarcity of prime product and some transactions falling into the start of next year. Increased investor caution following recent events taking place in Europe is so far geographically limited to Russia, and we do not expect this to change. Generally, with supply chain realignment and massive structural changes driving occupational demand, notably the continued growth in online retail, market fundamentals remain strong. This remains a key factor in attracting multiple domestic and international investor groups to the sector.”