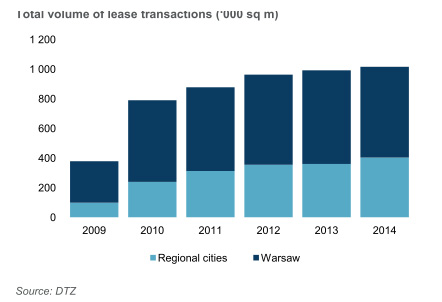 According to DTZ’s new Property Times Office Poland report, modern office stock in Warsaw and eight major regional cities (Krakow, Wroclaw, Tri-city, Katowice, Poznan, Lodz, Szczecin and Lublin) amounted to a total of 7.55 M sq m at the end on 2014. That year was certainly one for the books, both in terms of take-up and transacted volume totals.

Developer activity on the Polish real estate market is very strong, which results in high levels of new take-up. In 2014, permissions for use were issued for a total of 622,000 sqm of space, the highest in Poland to date. 277,000 sqm of office space was delivered outside of Warsaw; 110,900 sqm in Krakow; 68,500 sqm in Tri-city; 62,300 in Katowice and 61,600 sqm in Wroclaw. Taking into account the amount of pipeline supply and developer plans we expect these figures to increase in 2015 and 2016,” said Katarzyna Lipka, Associate Director in Consulting & Research, DTZ.

Vacancies at the end of 2013 decreased on the whole, the only increases being noted in Warsaw (by 1.6 pp, to 13.3 percent) and in Krakow (by 3.9 pp to 11.1 percent). The latter city has the lowest vacancy indicator (5.2 percent), which indicates that demand for office space in Krakow remains stable and high.

Asking rents for prime office space dropped slightly in the centre of Warsaw (to €22-25 per sqm per month), but remained stable outside of the centre and in regional cities, hovering around €11-15 per sqm per month. Over the next two years, DTZ expects further reductions in effective rents due to competition between landlords.