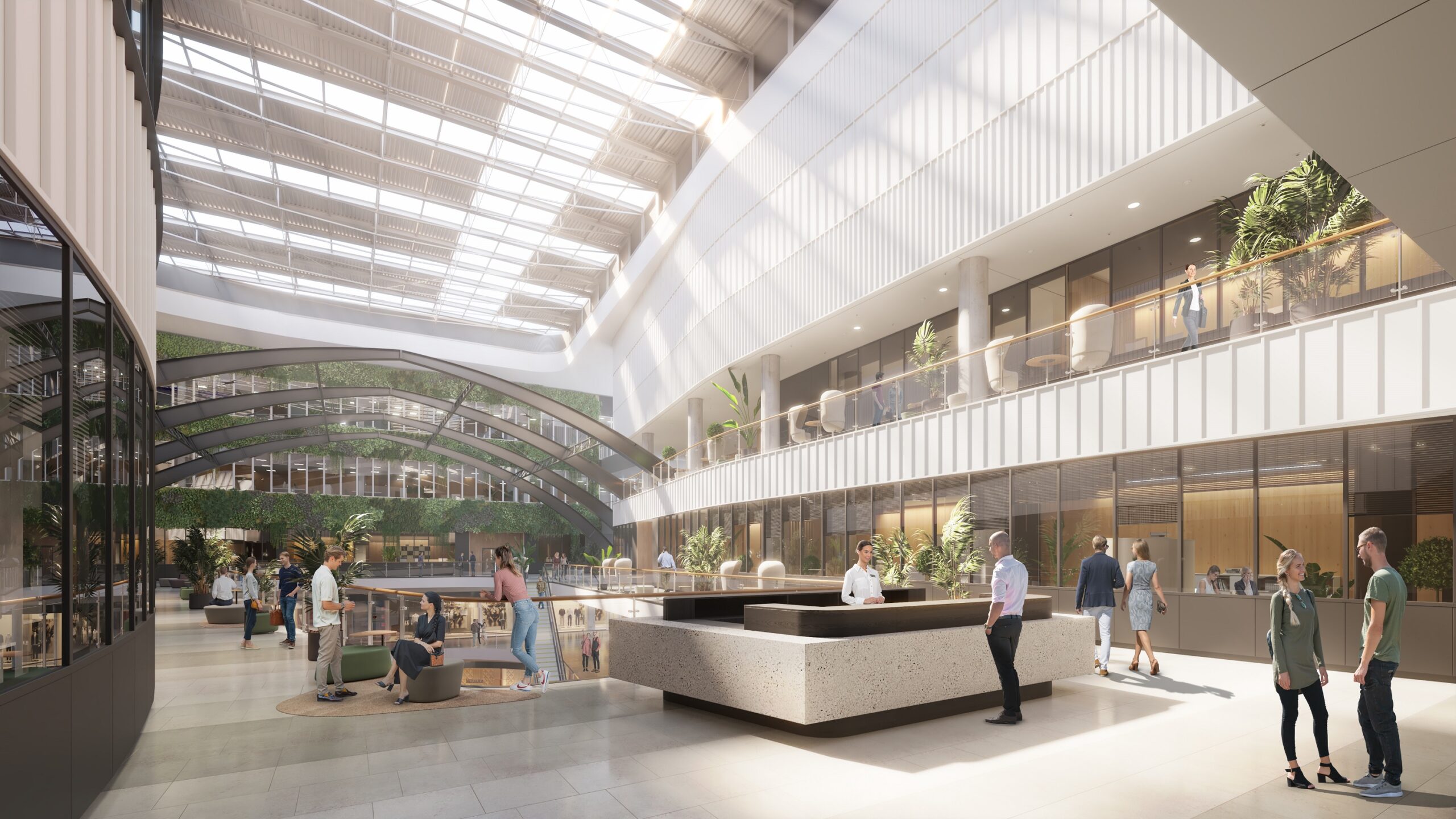 Supersam in Katowice is being transformed

Supersam, a shopping destination popular with the local residents of Katowice and also one of the most modern office buildings in the centre of the city, is undergoing a transformation. It will soon feature top-class office space as well as a new restaurant section. Konior Studio led by famous Silesian architect Tomasz Konior is responsible for the redevelopment project. The work should be completed in the fourth quarter of 2022.

Work on the transformation of Supersam is now underway. Most of the changes are to take place on the first floor, where modern office space will be added that offers the largest working area – with the highest ceilings – on a single floor in Katowice.

One interesting decorative element that will be added is a large green wall covered with several dozen species of plants. In addition to its aesthetic effect, it will also provide health benefits aimed at making a positive contribution to the well-being of employees in the building, while also moisturising and removing toxins from the air and producing additional oxygen. It will also be one of the largest installations of its kind in Silesia.

“Supersam will offer current and future tenants the highest levels of work comfort and the widest range of amenities. They will have access to, among other amenities, charging stations for cars and electric scooters, which we will also make available to all the building’s guests, as well as extensive facilities for cyclists, including changing rooms, showers and stands, while in the near future car-sharing services will also be provided. We will also be introducing a special Globalworth app to the building, via which employees will be able to have contactless access to the offices, call the lifts via their smartphones, open the car park barriers and reserve a conference room or parking space. And we have not forgotten about the environment, which is why Supersam can already boast a BREEAM certificate at the ‘Excellent’ level as well as being 100 percent powered by green energy. If we add to this its excellent location in the very centre of Katowice, next to the market square and among the main streets of the city centre, it Is one of the best office addresses in the city,” emphasises Łukasz Duczkowski, the Head of Investments at Globalworth Poland, the owner and manager of Supersam.

A new character is to be given to the first floor, which is to be the location for a new restaurant section – Koplania Smaków (‘the Mine of Flavours’) – with an originally designed common area for eating meals. Changes are also to be made to the decor and the layout, which Wrocław studio 3XA will be responsible for. Shopping will also still be possible in the popular stores in the centre, such as Aldi, Action, Dealz, Kik, Maxi Zoo and Rossmann. The ongoing work will not disturb the functioning of Supersam, which will continue to welcome guests and customers throughout the entire process.

“With these changes to Supersam, we are responding to the latest consumer requirements and market trends. When it comes to retail, our focus is on the specialisation of everyday purchases, while in addition to this we are expanding the office section and thus strengthening the multifunctional nature of our centre. One important feature of the changes to Supersam will also be the new, larger restaurant zone, which will function as an interesting alternative to typical food courts. We have decided that we do not want to compete with large shopping malls in this regard. We have opted for a different strategy for the development of Supersam, which in our opinion is better suited to the post-pandemic reality. As the owner of such iconic buildings as Hala Koszyki in Warsaw and Renoma in Wrocław, we have extensive experience of this type of multifunctional project, which we will also be putting to use with Supersam,” comments Barbara Wójcik, a Senior Asset Manager at Globalworth Poland.

The designer of the Supersam reconstruction project is the distinguished Katowice architect Tomasz Konior, together with his Konior Studio, which was also responsible for the original design of the building. With its coal-black façade, a reference to the mining traditions of Katowice, it is still one of the most architecturally interesting buildings in the city centre.

“The new Supersam has become an inseparable part of the Katowice city centre, over the last 7 years it has grown into the fabric of the city and the awareness of its inhabitants. The redevelopment related to the extension of the office function and the upgrade of the standard will certainly have a positive impact on the quality of space and the comfort of users,” says Tomasz Konior, the founder, owner and chief architect of Konior Studio.

Supersam is one of three office and retail projects in Globalworth’s portfolio in Poland, with the other two being Hala Koszyki in Warsaw and Renoma in Wrocław. The latter building is currently undergoing an extensive transformation, thanks to which modern office space will be added as well as a food hall restaurant area. The reconstruction process will also cover two of its historic atriums, which have skylights and large chandeliers – a reference to the original, pre-war interior of the building.