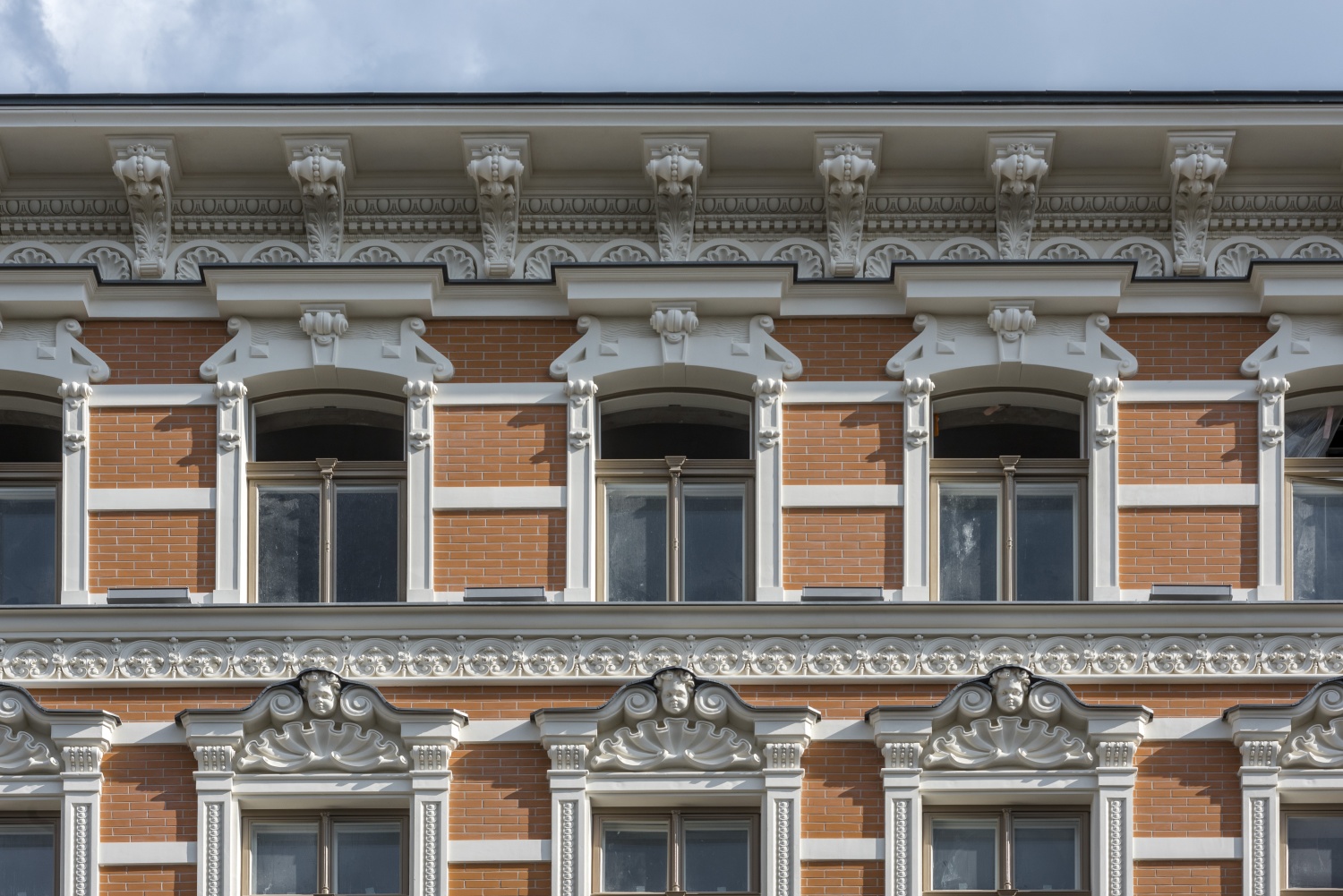 The ongoing process of finishing ornate facades shows that the revitalization of Foksal 13/15 is entering the decisive stage. The front of the tenement house no. 13 has just been unveiled from scaffoldings, exposing rich architectural details. A wealth of architectural details brings to mind the golden age of the building and reflects its former, now restored, luxurious feel.

After more than 80 years it is again possible to admire historical facades of Warsaw’s most beautiful tenements in the city centre. Foksal 13 and 15 are the result of design, preservation and reconstruction work which lasted over a decade and was achieved thanks to the specialized panel of architects, sculptors and monument conservators.

“We were under the great impression of the outstanding historical and architectural value of both residences at Foksal Street and we have set an ambitious goal of restoring their former glory. Today we are proud to introduce the results of our years-long efforts to Warsaw residents and future inhabitants of our buildings,” says Jeroen van der Toolen, Managing Director CEE, Ghelamco.

The history of the residence’s facade at Foksal 13 is interesting and full of plot twists. In 1899, when the building was erected, the front was kept in neo-renaissance style and was full of various architectural details, such as shells, volutes and putti’s heads and other ornamentation. A different theme composition was designed on each floor. The mannerist style of the elevation greatly harmonized with interior design, which was also richly decorated.

Yet, in 1933, Jan Wedel, the new owner of the tenement house and the famous Polish entrepreneur called “King of Chocolate”, decided to give the building a modernist style in accordance with trends of that time. He commissioned architect Zdzisław Mączeński to prepare a simplified facade project. In the wake of conducted modernization, the elevation was entirely stripped of wondrous ornamentation and sculptures. Also, the balconies’ design was changed, e.g. ornate balustrades were replaced with far more modest ones and the neo-renaissance avant-corps were removed. Significant changes took place also in the courtyard of the building, where Warsaw’s first panoramic lift was built.

Over post-war decades the Foksal 13 and 15 tenement houses continued to decay. There was even an idea to pull down both buildings for an extension of Kopernik Street. A historical breakthrough happened when monuments were bought by Ghelamco, which decided to conduct thorough revitalization. The investor decided the residence 13 facade would regain its original decorative appearance, which was originally designed by Warsaw architect and builder Artur Spitzbrath.

The reconstruction of the rich design of the facade was not easy. Proart studio, which was entrusted with the revitalization project, had at its disposal only one preserved photo of the residence’s front before modernization.

“A large part of the details was not clearly visible in the photo, so we had to check what kind of decorations was on tenements’ elevations during that period. My team traveled to different Polish cities which have housing dating back to the end of the 19th century. We took pictures of architectural decorations and, based on this material, we prepared drawings of details which could cover the front of Foksal 13. We were consulting our actions with prof. Jadwiga Roguska, an outstanding expert in historical architecture of that period,” says architect Anna Rostkowska from Proart studio.

The next stage of work was to find a professional sculptor who would prepare in clay Atlas-like figures to support the balcony over the main entrance, eagles on the top of the building and other, lesser architectural elements. Next, in accordance with conservation art, they were cast in plaster and reinforced with steel frames in some places. 80 cm thick brick external walls of the tenement house were finished with clinker tiles with a specially selected shade similar to the original.

Mounted wooden casement windows look almost identical as those over one hundred years ago.

Still, they are equipped with the modern triple-glazed system and have insulation and acoustic properties meeting contemporary standards. Maximum fidelity to historical designs combined with the use of modern solutions to increase the comfort of living is a quintessence of this investment.