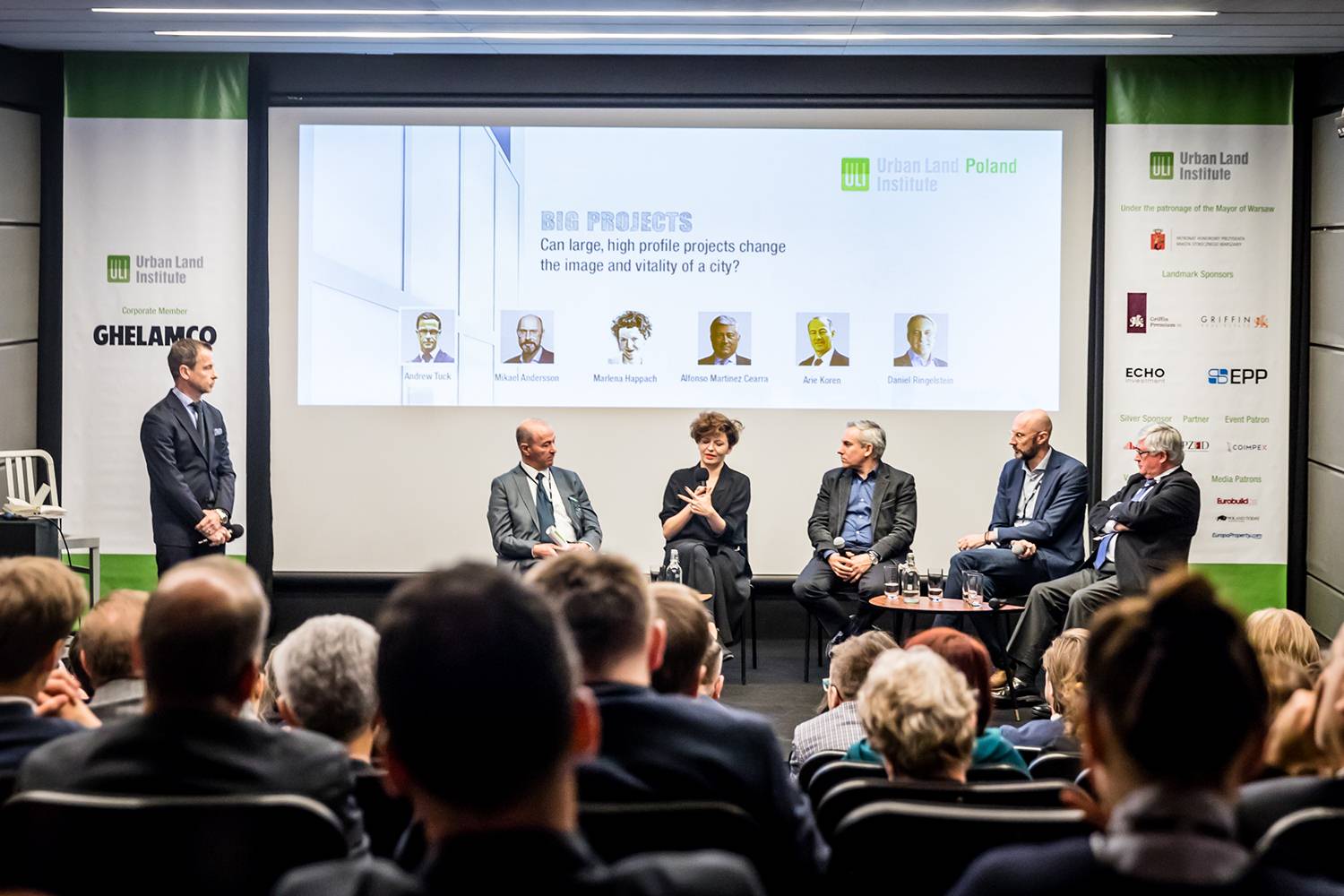 Can the Polish capital follow the example of Bilbao or cities across the ocean? Or perhaps it should seek its own, unique way? The first of the PLACES + SPACES meetings initiated by Urban Land Institute Poland, an international organization promoting responsible use of land and urban development, was held on 20 February in Warsaw. The event was attended by nearly 100 professionals representing the real estate, urban planning and architecture industry as well as local government representatives. Examples of emblematic projects from across the world inspired discussion about directions of growth for Warsaw.

The first PLACES + SPACES meeting was dedicated to the role of big projects with a significant share of public spaces in cities. At the beginning, Alfonso Martinez Cearra, Director General of Bilbao Metropoli-30, presented the fascinating case of Bilbao’s transformation from a neglected port and industrial city into a vibrant, popular tourist destination. Several strategic initiatives were the keystone of that transformation, including the regeneration of the riverside, improvement of the public transport system and cultural projects, most importantly the unique museum of modern and contemporary art designed by Frank O. Gehry.

“All we do in the urban planning process must make cities better and safer to live in. In the case of urban regeneration projects, public-private partnership, a clear road map for change, rising above partisan politics and a long-term vision are key elements,” said Alfonso Martinez Cearra. He also stressed the necessity to understand the needs of the youngest residents, which met with great enthusiasm from the participants. “The world of innovation is ruled by children. Without understanding their needs, it is impossible for big projects that are expected to become new landmarks of a given city to succeed,” Alfonso Martinez Cearra said.

Figures testify to the success of the largest city of the Basque Country; in 2017, the Guggenheim Museum alone was visited by more than 1.3 million people, and the institution brought the Basque Country over €430 million in revenue.

The keynote speaker in the second part of the PLACES + SPACES meeting was Daniel Ringelstein, Director of City Design at Skidmore Owings and Merrill Architects. Ringelstein presented more examples of big projects that have transformed fragments of cities across the world such as Gardens by the Bay in Singapore, the High Line in New York City and, most importantly, the Millennium Park in Chicago. The transformation of that area, which previously served as a rail yard, was one of the largest undertakings ever completed in the centre of the Windy City.

As Daniel Ringelstein pointed out, “The Millennium Park’s success is a result of a consistent execution of the local decision-makers’ vision in partnership with the dedicated foundation. Involving world class architects, landscaping experts and artists helped create one of the most popular places in Chicago. The multi-functionality and simplicity of the project combined with many surprising elements are the factors that make the Millennium Park a place that citizens are proud of and a must-see for tourists.”

The significance of the Millennium Park, opened in 2004, is underscored by the fact that its neighbourhood became one of the most popular areas for Chicago home builders. Within a mere six years, the area saw the development of approximately 3,600 new apartments (a 57 percent increase) and more than 750 hotel beds (an 11 percent increase). It is estimated that tourists have spent around $1.4 billion in the neighbourhood of the park.
The participants then moved on to a debate moderated by Andrew Tuck, Founding Editor of the Monocle Magazine. Citing international examples, the participants addressed many issues related to directions of growth for Warsaw.

Marlena Happach, Chief City Architect of Warsaw, emphasized the increasingly positive effects of the dialogue between city servants and investors. “Taking into account the comprehensive regeneration scheme for the district of Praga and changes in the neighbourhood of Powiśle, to name a few, it is safe to say that a great deal of good work is going on in Warsaw. Our capital also has an institution whose popularity can be compared to that of the Guggenheim Museum in Bilbao, namely the Copernicus Science Centre, which has over 1 million visitors every year.”

“Warsaw needs good mixed-use projects; places that will attract people and will operate for a larger part of the day. Such projects need careful planning; they are not easy but if they are properly prepared and open to the public, they will succeed,” said Mikael Andersson, from Echo Investment.

Meanwhile, Arie Koren, CEO Okam Capital pointed out that “From the perspective of developers, the partnership with Warsaw City Hall is looking better every day, becoming increasingly professional and effective. This lays a solid foundation for the city’s further growth.”

“The world is witnessing a global race between metropolitan areas. Executing significant, recognizable projects is one of its elements and large cities such as Warsaw must be prepared for it,” added Alfonso Martinez Cearra.

“I am happy to see that the first PLACES + SPACES meeting enjoyed such great popularity. I am convinced that our speakers provided participants of the Polish real estate market with many interesting suggestions and inspirations. Both the debate and informal talks showed that the interests of private investors do not have to go against the interest of the city and its residents. On the contrary, we can do many great things together,” concluded John Banka, Chairman of Urban Land Institute Poland.

The PLACES + SPACES series is held under the auspices of Mayor of Warsaw. The following meetings will be held: