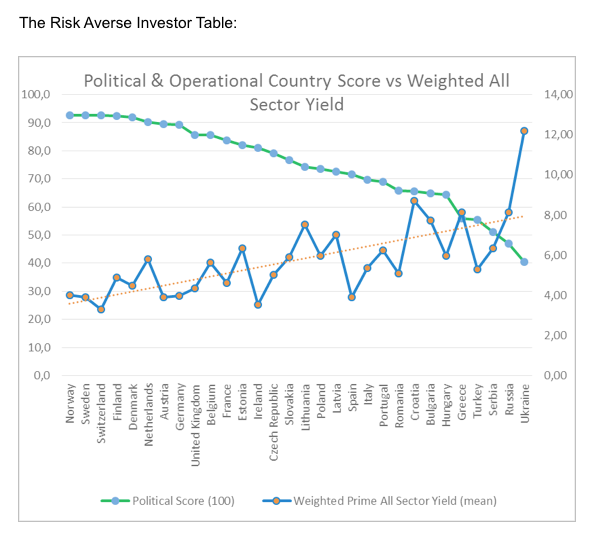 Geo-political change, challenging investment market cycles and the sheer weight of capital is re-writing the rules of attractiveness and investment in European countries, according to a new report from Colliers International.

By assessing the core fundamentals of European commercial property markets and categorising how different countries are positioned relative to an investors strategy, attitude to risk and their desire for stability, growth or yield, Colliers has identified the Nordics, Netherlands and Tier 1 markets, alongside risk-adjusted opportunities in core and select CEE countries as the most favourable places in which to invest in commercial real estate in 2017.

Most of the European commercial real estate markets are witnessing late-cycle activity, yet global funds under management continue expanding their allocation to real estate, up to an estimated US$4.9 trillion to date in 2016. Against this backdrop, Colliers has asserted that the H1 2016 ‘cause for pause’ is not a position that investors can prolong amidst increasing competition for product.

Richard Divall, Head of EMEA Cross Border Capital Markets at Colliers International, said: “Investors can’t sit on their hands for too long. Finding well-priced product may have become increasingly difficult towards the end of the current cycle, but the money being funnelled into property continues to grow as commercial real estate investment remains a very attractive option in a macro environment of ‘lower for longer’. As we head towards 2017, all markets continue to offer possibilities depending how far up the geo-political risk curve you want to go.”

In Colliers’ ‘European Investment Market Outlook: A Matter of Perspective’, three broad investor personalities emerge: Risk Averse, Stability & Growth-led, and Yield Hungry and their recommended country for investment is revealed in a ranking.

“The highest ranking ‘Risk Averse’ and ‘Stability and Growth-led’ markets are the ones likely to be most active, as they appeal to core and core plus investors, who dominate the investor landscape.

At present, the combination of political stability, operational transparency and solid yields available in the Nordics and Netherlands has put them at the top of the investment volume growth curve heading into 2017. The deeper Tier 1 markets of Germany, the UK and France remain closely in step,” said Damian Harrington, Head of EMEA Research at Colliers International.

“Product availability has diminished as investors hold on to key assets to drive their portfolio returns, plus there are fewer investors out there in a forced position to sell. Hence active buyers are seeking out alternative indirect opportunities via corporate, or M&A-type deals to satisfy their requirements. This adds to the attractiveness of the Nordics, Netherlands and Tier 1 markets as they provide greater diversity of opportunity,” added Divall.

For the risk averse investor, where transparency and liquidity are key, the Nordic markets sit at the top of the rankings as the bastions of European stability. Switzerland, the Netherlands and Austria also make up the top seven countries – all ahead of the Tier 1 markets of Germany, the UK and France, who are facing months, or even years, of political upheaval.

Low risk, however, comes at a price. There is a clear inverse relationship in real estate pricing, based on weighted all-sector yields relative to country risk. On a relative weighted all-sector yield basis, Finland, the Netherlands and Belgium strike the most promising balance between risk and yield of all European countries. Conversely, Spain and Italy look somewhat overpriced, especially the latter which faces an upcoming referendum and has significant bad-debt banking risks to contend with.

Political and operational risk is not the only consideration of investors. For those with a longer term view of what will drive demand, such as the outlook for short and long-term interest rates, GDP, employment growth and demographic change, there is a big shift in the overall ranking of which markets look most attractive. Tier 1 countries lead the way, with Germany taking the top spot ahead of the UK and France. The Netherlands again fares well, and on a yield pricing basis looks very attractive relative to the other larger, top performing countries.

For those with a bigger appetite for risk, where liquidity may be lower but yields are higher, it is understandable why some investors are moving deeper into key Tier 2 markets and driving a resurgence in activity in Central and Eastern European (CEE) markets, both core and outer. Bulgaria leads the charge across CEE countries from a yield perspective, closely followed by Slovakia, Croatia and the Baltic markets. Close behind these markets are Belgium, the Netherlands, Czech Republic, Finland and Denmark, offering a healthy combination of both yield and market depth.

“Based on transaction evidence up to H1 2016, it appears investors are plugging into the merits of the markets highlighted by Colliers’ analysis. Croatia, Latvia, Lithuania, Finland and the Netherlands all feature within the top ranking markets for different investor styles, and proved to be some of the strongest growing markets in terms of year-on-year investment turnover growth to date in 2016,” explained Harrington.

Divall concluded: “The next three months is set to be a landmark time for Europe and with the markets anticipating the unexpected, perspectives for early 2017 could well change again. Equally, parts of Europe still have to manage out a significant legacy of bad debt, with a number of banks at risk of failing, including Deutsche Bank and Monte dei Paschi si Siena. The impact of these banks failing, or requiring a bail-in or out, could significantly adjust the outlook for markets, particularly for Italy.”