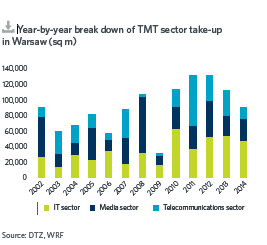 TMT as the leading sector in modern office space use – EuropaProperty

According to DTZ’s latest report “Occupier Perspective. The TMT sector”, TMT companies (i.e. technology, media, and telecommunications) are the largest group of modern office space tenants, both in Warsaw and other major Polish cities. Due to changes occurring in this sector at the moment (such as consolidations, employment growth, and emerging new entities), their demand for office space is expected to remain at a high level in the coming years.

The total volume of lease transactions concluded by TMT companies in Warsaw in the years 2002-2014 exceeded 1.16 million sqm, which accounts for 19 percent of lease agreements signed, and was the highest market share among all sectors. In this period, IT companies were the most active, followed by media, with telecommunications taking third place.

TMT tenants’ dominating position is mainly due to an increase in the number of companies and a dynamic growth that this sector has been undergoing for the last five years. While in the years 2010-2014 the total volume of lease agreements signed by IT, media, and telecommunications companies reached 580,000 sqm (an annual average of 115,000 sqm), it was nearly 60 percent lower in the period 2005-2009 (365,000 sqm, and an annual average of 73,000 sqm).

In recent years, TMT companies have often opted for non-central locations, mainly in Warsaw’s largest business districts, i.e. Upper South (the area of the so-called Służewiec Przemysłowy) and South West (Aleje Jerozolimskie and Żwirki i Wigury). This stems, above all, from a relatively good accessibility of these areas by public transport, favourable price-to-quality ratio, and high levels of developers’ activity in the zones, which translates into an increase in supply and falling effective rents.

“Due to dynamic changes in the TMT sector, it is crucial to provide these tenants with effective office space and flexible lease conditions. What is more, given the staff profiles (mostly young people) and their working patterns (large portions of time dedicated to teamwork and the need for internal mobility), it is vital to create an attractive workplace, adapted to each company’s corporate culture and thus positively influencing communication and cooperation between the employees,” said Kamila Wykrota, Head of Consulting & Research at DTZ Poland.