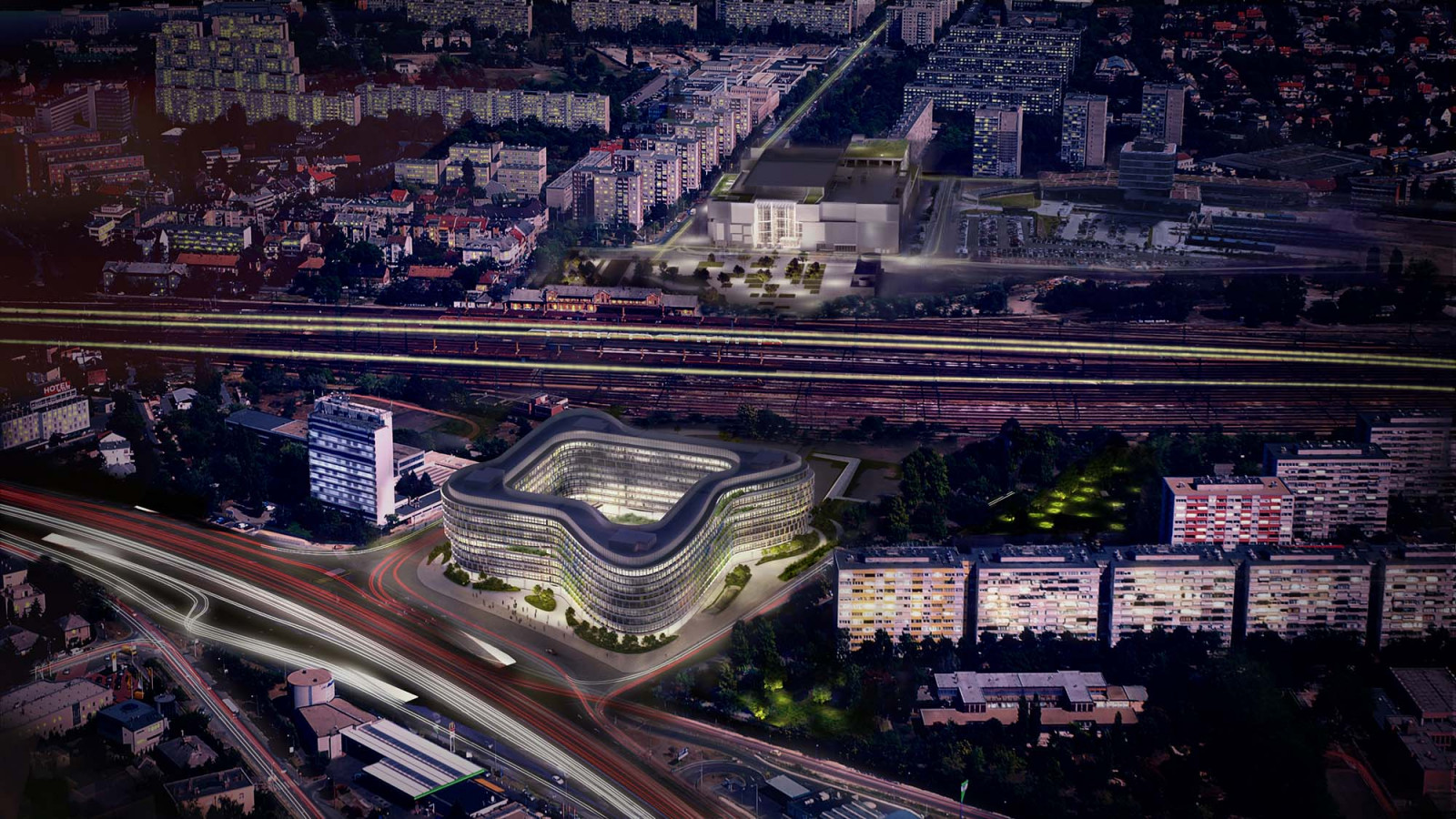 By 2050, 70 percent of the world’s total population of 9 billion people will live in cities. Today’s buildings usage account for 35 percent of our total energy consumption, raising the question: how can an urban district become economically sustainable? The experts of Paulinyi & Partners, a market-leading company group in the field of sustainable architecture in Hungary, have collected the four most important trends of urban design supporting sustainability in 2020.

The majority of European metropolises face the same difficulties: because of the high prices of housing in their downtown areas and due to mass tourism, residents are leaving the historic urban centers, transportation and infrastructure require significant transformation, and natural light, ambient noise and air pollution are becoming key focal points of urban environmental protection; additionally, questions related to the elimination of monofunctional urban developments must also be resolved.

Important prototypes, however, of futureproof multifunctional European cities already exist today: the Düsseldorf-Hafen district is a progressive example of the expansion of the historic city center, demonstrating the high-quality, simultaneous integration of human-scale urban spaces, mixed functions and public transport. Budapest’s Corvin District is a good example of the successful transformation of an area within the city center, which “restores the original mixed function of the city: it functions as a workplace, a residential area and entertainment center at the same time,” says László Fábián, Project Director of Paulinyi & Partners.

What are the most important solutions to apply in futureproof urban design? The four trends below list these criteria.

“The implementation of economically plannable urban design projects require awareness on the part of both the developer and the designer, with clear economic models, measurable parameters and Key Performance Indicators, as well as long-term cost calculations for the project as whole,” says Dr. Gergely Paulinyi, Chairman and Chief Executive Officer of the company group. During the planning of a project of an urban scale, it is crucial to identify parameters which will help achieve the optimal functioning and utilization of the entire district. It is important to take a holistic view of the project, which means architects must take into consideration several aspects: parameters of area and density, ideal reach and access, phasing, usability and aspects of environmental consciousness.

It is these types of data which provide the basis of optimal urban and business planning. One of the winning projects at the World Architecture Festival, held between 4-6 December 2019, is the Connected City project of Hamburg, which received the prize for its establishment of appropriate proportions and diverse living and working spaces. This is the largest urban development project in Germany since the HafenCity initiative. It is worth studying the HafenCity development, however, because the project brings together several developers and architecture firms. New offices, residential buildings, leisure facilities and infrastructure supporting cycling and pedestrian use provide the foundations of the renewed city center – the scheduling of these construction projects and establishing the interplay between them plays a key role in the renewal of the area.

In Budapest today, one of the largest-scale urban development projects is being implemented at Kelenföld, which – similar to HafenCity – will result in the creation of a multi-function area.

One significant feature of the area is that while it is home to tens of thousands of residential buildings and offers almost all modes of public transport, it has until now lacked service and office functions altogether. Etele Plaza and the Budapest ONE office building, designed by Paulinyi & Partners and already under construction, as well as the plans of the intermodal hub, are the first buildings of the project; commercial, architectural and sustainability aspects together formed the basis of this phase of the project design.

One of the main objectives of urban design projects is to create the appropriate mix of functions for residents and users of the buildings and public spaces – incorporating residential, office, retail, sports and recreation functions. “Ideally, an urban development project involves residential, office and service functions, as well as kindergartens, schools and cultural facilities. Monofunctional urban developments, where these diverse functions are missing, have generally failed, resulting districts which are unlivable in the long term,” says Gergő Burián, Project Director of Paulinyi & Partners. Examining user habits and urban planning processes based on big data both play key roles in the creation of an optimal mix of functions and diverse urban districts, as well as in providing for the well-being of users.

An exciting multifunctional urban planning project is launching in Paris this year, where the area around the old railway station at Ordenes-Poissoniers is being refurbished and transformed into a new, mixed-function, sustainable city center. The implementation of the Jardin Mécano project, realized according to the plans of Biecher Architects and SLA Architects, starts this year and is expected to be completed in 2024. This old industrial area of Paris will be renewed with 1,000 new residential buildings, large public parks, offices, cultural and educational institutions as well areas suitable for urban gardening.

Innovative solutions for the transportation system of a city

A fundamental element of the economic, environmental and social sustainability of multifunctional urban districts is the establishment of an efficient public transportation system: without the appropriate infrastructure, new areas cannot be integrated into the city. Automobile traffic is increasingly being eliminated from city centers and new districts, and new, shared electric transport options, pedestrian use and bicycling are gaining ground. There are many progressive examples of the human-scale optimization of transport: one of the best is City Life Milan, which is being developed continuously since 2009. One of the largest car-free zones of Europe is being developed here on 90 hectares, interwoven with bicycle and pedestrian lanes, and wide avenues leading from residential buildings to the city center. The city center, with diverse functions, is built around a large public park – larger, in fact, than any public park built in Milan in the last 120 years. Cars, however, are not banned totally from the city center, and are able to access garages and parking zones through an underground road network.

The realization of the innovative transportation system development was based on analysis by Systematica, which included examinations of the flow of pedestrians and parking possibilities based on sharing systems, as well as analysis of the complete traffic and distribution network. Three iconic architects of the project are Zaha Hadid, Arata Isozaki and Daniel Libeskind; the newest building, designed by the architectural firm BIG, will be finished in 2023.

The city of Bogota is also a significant example of integrated and diverse transportation structures, where, thanks to developments carried out since the 2000s, air pollution has decreased by more than 40 percent, and citizens using public transportation spend 32 percent less time commuting.

The urban renewal project City of Tomorrow is being implemented in the area of a former industrial port in Malmö, where the project will transform the area and increase the number of its inhabitants from 4,000 to 30,000 persons. New buildings will meet environmental regulations on energy efficiency, and will operate using 100 percent renewable energy. Form and function were equally important when designing the buildings, ensuring both ecological sustainability and human scale. A similarly innovative example of integrative urban design is the Aspern Smart City project in Vienna, co-financed by the city of Vienna, the local gas utility company and Siemens. Their aim is to achieve zero energy consumption and to establish an ecosystem based on the actual lifestyle and energy consumption of the inhabitants of the district.

Rapidly changing consumer habits, the development of digital technology and the possibility of changes in the functions of buildings results in the creation of flexible and futureproof spaces. In Budapest, one of the first buildings of the South Buda City Center Project, Etele Plaza, developed by Futureal, is designed to be adaptable: the spatial system of the plaza can be adjusted according to increasing or decreasing tenant areas and demands. “If we build for future generations we must design buildings which will be able to respond to the needs of the future. We provide the background for development, transformation and even for changes which cannot yet be anticipated,” says István Vámossy, Project Director of Paulinyi & Partners and co-designer of Etele Plaza.