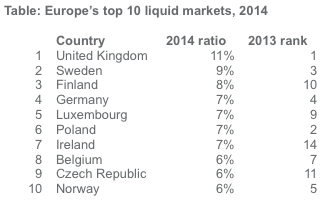 The UK maintained its position as Europe’s most liquid commercial property market in 2014, followed by Sweden and Finland according to DTZ.

Liquidity indicates the ease with which investors can enter and exit a market, with liquid markets characterised by a high transactional turnover of assets.

The last few years have seen a significant uplift in liquidity across the region. Europe’s overall liquidity ratio reached a record low of 2.1 percent in 2009 but activity has picked up considerably since and the ratio increased to 5.6 percent in 2014, ahead of the ten year average of 4.6 percent.

Nigel Almond, Head of Capital Markets Research at DTZ, commented: “The UK remained Europe’s most liquid market in 2014 as 11.3 percent of its stock was transacted. Sweden, moved up to second from third in 2013 as trading represented 9.4 percent of its stock with another Nordic market, Finland, third at 7.7 percent and Germany fourth at 7.2 percent.

“France is interesting as it had the third-largest trading volume in absolute terms in 2014 but this was just 4 percent of its stock being traded so it only ranked 11th across Europe. This shows how focusing on volumes alone can be deceptive to investors for whom liquidity is often the key.”

Magali Marton, Head of EMEA Research at DTZ, added: “Over the past year we have seen a number of markets move up the rankings. Finland was the most eye-catching as it rose from 10th spot in 2013 to third in 2014, driven by a rapid increase in sales of industrial and warehouse space. The peripheral markets also rose up the tables with Ireland up from 14th to 7th and Spain from 19th to 14th as volumes in both these markets rose. In contrast Italy dropped back from 17th to 19th spot as liquidity remained flat.”

Over the past year activity across Europe has been supported by strong levels of cross border activity, with non-European investors grabbing a record share of 2014 volumes at 30 percent.

Volodymyr Mysak, Director of Capital Markets, DTZ Ukraine, comments on this: “Unfortunately, due to the unstable situation and military conflict at the Eastern Ukraine, Ukrainian property market showed one the lowest liquidity ratios in Europe, followed by Russia in 2014.“

Nigel Almond said: “Not surprisingly the UK was the most liquid market for non-European investors at 4.4 percent, driven by strong inflows from North American, Asian and globally-sourced capital, with much focused on Central London. Despite relatively low absolute volumes of €3 billion in 2014, Poland was the next most liquid market for non-European activity at 3.7 percent and neighbouring Czech Republic in fourth spot at 2.2 percent. Ireland was third at 2.6 percent.”