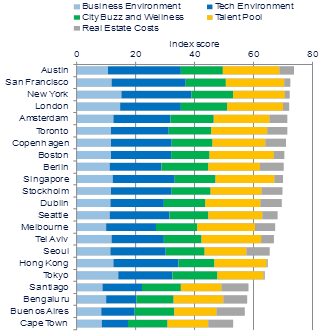 Austin is the world’s foremost ‘tech city’, offering the infrastructure, business environment, talent pool and lifestyle to make it a strong base for tech companies, according to new research from international real estate advisor Savills.

Two other US cities – San Francisco and New York – were ranked 2nd and 3rd respectively in Savills Tech Cities 2017 research programme, followed by London in 4th position. Access to venture capital and talent give US cities a lead over other global centres, says Savills, but Austin beats San Francisco to the top of the table because it has lower real estate costs and is so successful in attracting tech talent.

However, while US cities dominate the top of the Tech Cities rankings, the rest of the top ten consists largely of such ‘liveable’ cities as Amsterdam, Copenhagen and Toronto, which appear above traditional established global tech rivals such as Hong Kong and Singapore. This is due to the strong performance of these cities in terms of ‘buzz and wellness’ says Savills, with the firm noting these as factors that are likely to prove increasingly important to the tech industry in attracting future talent.

Savills has quantified 22 cities’ ‘buzz’ (i.e. nightlife, entertainment and cultural offer) and ‘wellness’ (i.e. pollution levels, quality of parks, healthcare, commuting times) and the cost of living in each location, to create a specific ‘city buzz and wellness index’ for the first time. On this basis, Berlin, London and Tokyo are the highest ranking. Berlin is the only city which appears in the top five cities for all three metrics (‘buzz’, ‘wellness’ and cost of living) and ranks 1st. London and Tokyo, despite having lower wellness scores, are global metropolises and therefore are boosted by their ‘buzz’.

Amsterdam is ranked 4th and Toronto 5th, after scoring highly in both ‘wellness’ and ‘buzz’ while remaining affordable locations to live. Copenhagen is ranked 11th in the index due to its high living costs, but is notable for being the world’s foremost tech city in terms of ‘wellness’ and is therefore one to watch, says Savills. The real estate advisor notes that given the increased focus on wellbeing among the latest generation of workers, this could come to dominate their decision-making. Cities that deliver healthier environments are therefore likely to consolidate their positions as destinations for tech talent and occupiers.

Nicky Wightman, director, Savills Worldwide Occupier Services, said: “Cities attract young tech talent who increasingly want to live in dynamic, healthy neighbourhoods within walking or cycling distance of the office. For the first time we’ve therefore looked to specifically identify the cities that deliver what this demographic desires. While there’s often a trade-off between ‘buzz’ and ‘wellness’, Amsterdam and Toronto balance the two. Copenhagen, meanwhile, may not currently offer the breadth of nightlife and entertainment as larger cities, but with the next generation of talent increasingly making decisions based on the potential impact on their physical and mental wellbeing, it may well see its global appeal grow. Occupiers looking to attract such talent therefore need to pay close attention to such factors when looking for new locations.”

Accommodation costs (the cost of renting residential and office space per employee, per annum) stand at US$39,700 in Amsterdam, US$35,800 in Toronto, and US$33,500 in Copenhagen – half that of London, New York or San Francisco, where the same costs exceed US$65,000 per year.

Paul Tostevin, associate director, Savills World Research, added: “Smaller cities tend to fare well as ‘healthy’ cities, whilst crowded megalopolises such as London, New York and Tokyo offer a rich variety of retail, nightlife and cultural experiences which will always be attractive to some workers. But in the middle there are cities such as Amsterdam, Toronto and Berlin which score well on both. These cities tend to mean shorter commutes, easier access to amenities and a better work/life balance, and we suspect they may move up the rankings as they drive the economy in a digital age.”