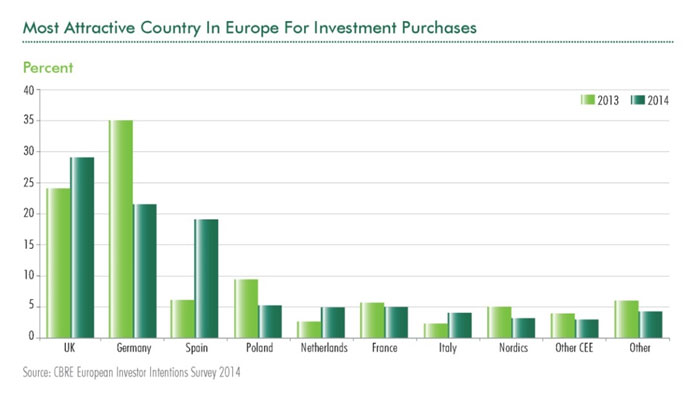 The much stronger tone and sentiment in the European commercial real estate investment market is clearly reflected in the findings of CBRE’s 2014 ‘European Real Estate Investor Intentions’ survey. Investor confidence in Western Europe is up sharply compared with last year, with the market chosen by 71 percent of respondents as the most attractive global region for investment.

Mike Atwell, Head of CEE Capital Markets, CBRE, commented: “2013 proved to be the highest investment volume in Poland since 2006 with total transactions equal to €3.29 billion. From a cross-border investor perspective, Poland continues to be the most active market in the region and high on most investors target lists. One of the challenges for the market in 2014 will be the limited supply of core assets, however, there are several large on-going transactions which should be finalised during the first or second quarter of 2014 and we expect investment volumes to be similar or potentially higher in 2013.”

There are significant shifts in geographical preferences, with a strong rise in the proportion (19 percent) of investors seeing Spain as most attractive for purchases in 2014 – up from 6 percent from 2013. Madrid is now in second place to London as the most attractive city for investment, a dramatic change from last year, with Barcelona also in this year’s top ten choices. Investor appetite for opportunities in ‘recovery markets’ is further evidenced by the inclusion of Amsterdam and Dublin among the top ten.

Peter Damesick, Chairman, EMEA Research, CBRE, commented: “The sharp increase in investor interest in Spain follows a strong proportionate rise in turnover in the Spanish investment market over the course of the past year, with sales totalling €5 billion in 2013 overall – more than double the level in 2012. Resurgent investment demand in Spain reflects the easing of concerns surrounding the eurozone sovereign debt crisis and positive investor perceptions of recovery potential in the Spanish market with recently improving economic indicators.”

The UK regains its position in 2014 as the single most attractive country for making purchases, selected by 29 percent of investors. The UK economic recovery has gathered pace over the past year and is outpacing the eurozone. Germany is in second place with 21 percent of the vote, down from 35 percent in the 2013 survey when it was first choice. Also noteworthy, although much less dramatic, are the increased proportions of investors identifying the Netherlands and Italy as most attractive. Both these markets saw increased investment activity over the past year as investors took a more confident view of their relative value and recovery prospects.

Investors are clearly moving up the risk curve in 2014, with almost half of investors reporting increased appetite for secondary property. A clear majority (65 percent) view the most attractive types of assets outside the prime/core space – a higher proportion than last year (58 percent). A large majority (67 percent) of investors also expect their purchasing activity to be higher this year than in 2013.

While there is still substantial demand for prime or core real estate assets, the proportion of investors saying these were their most preferred asset type decreased from 42 percent in 2013 to 35 percent this year. Those investors viewing ‘good secondary’ as most attractive increased to 33 percent from 25 percent last year. There is also an increase in the attractiveness of ‘opportunistic/value-add’ assets from 25 percent to 28 percent.

In a clear reflection of the gathering strength of investment demand and capital commitments directed at European commercial real estate, investors identified the availability of stock as the single biggest obstacle to acquisitions, followed by asset pricing, and competition from other investors. These obstacles to investment are symptomatic of more crowded and keenly priced markets and are consistent with the survey evidence of investors showing greater risk appetite and viewing assets outside the prime/core space as most attractive.

It is noteworthy that only 7 percent of respondents cited the cost or availability of debt as the greatest obstacle to investment in 2013. This is a significant change from the past two years when the ability to source debt was a more potent constraint on activity. This finding is reinforced by other recent CBRE research that has shown an increasing number of lenders becoming active in European markets and significant relaxation in lending terms over the past twelve months; both in terms of lending margins and available loan to value ratios.

Dr Peter Damesick added: “What a difference a year makes. Investment activity in European commercial real estate markets gathered pace rapidly over the second half of 2013 and maintained strong momentum at the start of 2014. Against the backdrop of improving economic conditions and the abatement of the euro crisis, the overall picture that emerges is of a rapidly warming real estate investment market fuelled by a strengthening flow of capital and increased risk appetite.

“The gathering tempo of investment demand has itself brought fresh challenges and concerns for investors. Investors are finding markets to be more crowded, competitive and keenly priced; all of which is pushing some investors to target a wide range of locations and asset types beyond prime.“