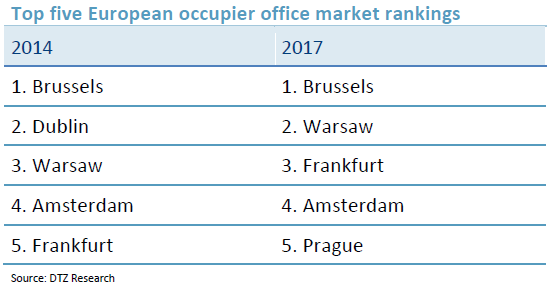 Warsaw office market among the best in Europe – EuropaProperty

DTZ has published a cyclical report entitled “Global Outlook 2015”, which analyses key factors and trends shaping the global office markets. The main findings are as follows.

Warsaw has been ranked 3rd in last year’s ranking of the most attractive office markets in Europe. Moreover, Warsaw will move to 2nd place in the ranking in 2017, which Brussels will continue to lead. In three years, Prague will replace Dublin, thereby Central and Eastern Europe will contain two of the best office locations in Europe.

“In recent years Poland has made an enormous effort to encourage foreign tenants to do business in its maturing market. We foresee that investors’ activities in Central and Eastern Europe in 2017 will remain focused on Poland and the Czech Republic, which will lead to even greater interest from companies in these markets,” said Hans Vrensen, Global Head of Research at DTZ.

Warsaw owes its presence in the top 3 of Europe’s real estate desirability leader-board, among others, to its status as the leading business centre in Central and Eastern Europe, where the key occupiers are international corporations from various sectors. Over the last three years, tenants in particular have benefitted from Warsaw’s ample and affordable supply (as compared with Western Europe). Warsaw’s advantage is also its strong capital market. The dynamic development of the Warsaw Stock Exchange resulted in it becoming the regional financial centre, which attracts international investors. The factors which will increase Warsaw’s attractiveness among investors and tenants in the coming years will be retaining a favourable reputation among foreign companies, as well as the prospects for growth of the Polish economy in the long and short terms.

“Warsaw will strengthen its position in the European office market in the coming three years. It is an attractive and popular destination for international tenants from various industries and, compared to many other European cities, is highly competitive in terms of space availability and affordability. Poland’s growing influence on the world stage and Warsaw’s position as the largest financial centre in Central & Eastern Europe play a significant role as well. Many international corporations will continue to base their regional headquarters in Warsaw and higher value outsourcing sector jobs are being created here as well,” said Alan Colquhoun, Head of Central & Eastern Europe, DTZ.

The report also states that the most attractive office destination globally in 2014 was Mumbai, which will be replaced by Shanghai in 2017. Brussels (15th) and Dublin (16th) are the highest ranked among European cities. DTZ’s analysts predict that over the next three years no other European city will be among the top ten locations of office space in the world.

The report, prepared by DTZ’s experts, is predicated on their analysis of the key deciding factors influencing the selection of desirable office locations. The experts prepared various rankings of the most attractive office markets for both occupiers and investors by comparing the world’s 60 largest cities in terms of the properties’ availability and profitability. In order to do so, they examined, among others, vacancy rates, new supply over the past and coming three years, space costs, as well as location quotients, FDI as a share of GDP and labour productivity.