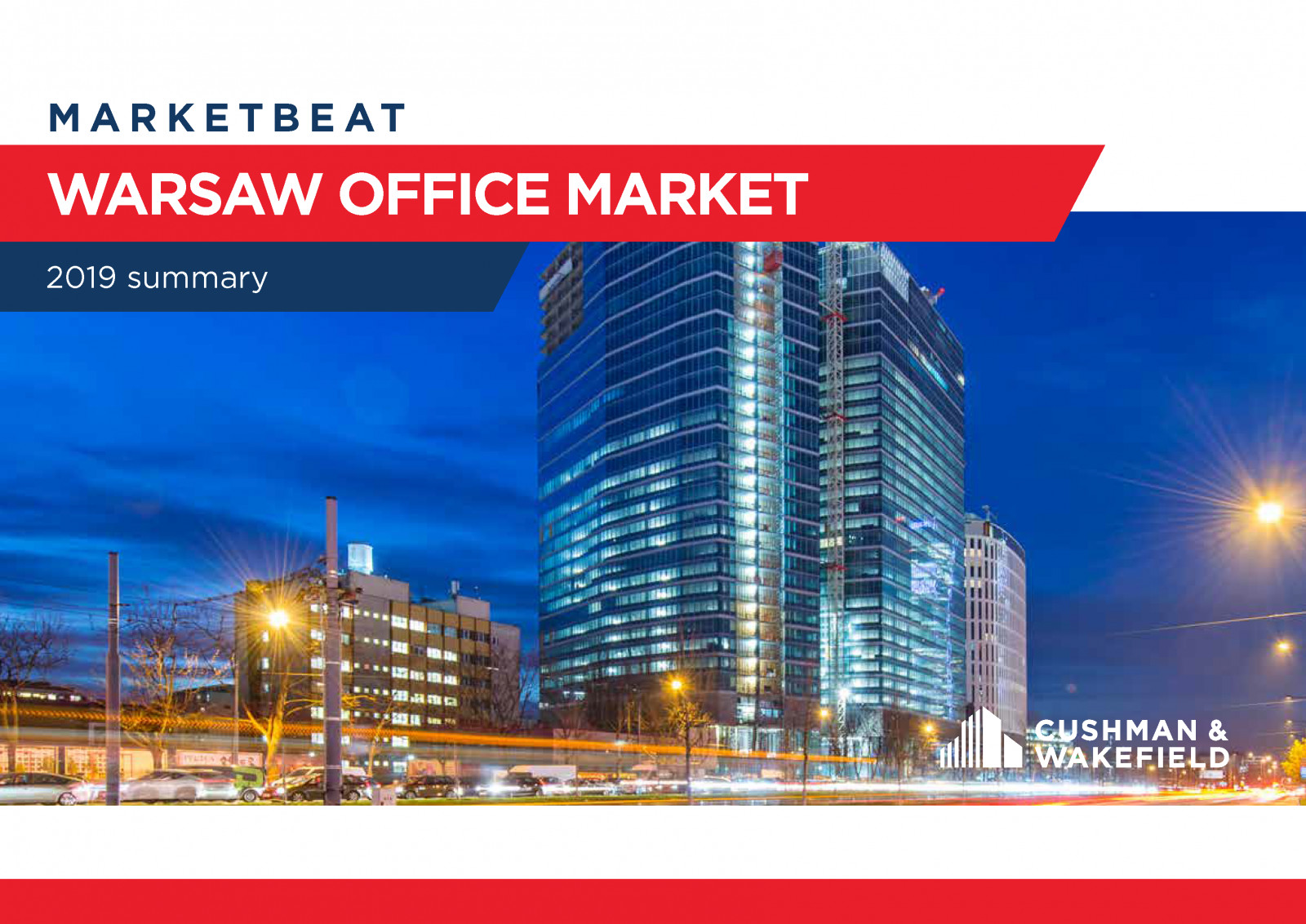 Prime office yields continued to move in throughout 2019, landing at 4.50 percent at the end of the year;

Occupier demand remained robust, with 878,000 sqm transacted in Warsaw, up by 2 percent on the peak year 2018;

Strong office demand came from the banking and telecommunication sectors, which accounted for the five largest office deals for a total of more than 160,000 sqm;

Warsaw’s office investment volume totalled EUR 2.42 billion, representing a 40 percent increase on 2018’s level. The robust investor demand in the last 12 months pushed prime office yields in central Warsaw down to approximately 4.50 percent at the end of 2019. However, yields for office buildings with above-average lease lengths are 4.25-4.50 percent, with non-central grade A office yields ranging between 6.50 percent and 7.00 percent.

“Warsaw’s office sector was the top-performing sector of the Polish commercial real estate market in terms of investment volumes in 2019. This was driven, among other things, by the strong occupational market, the availability of prime assets and the growing interest of investors, including newcomers to Poland. This trend is very likely to intensify in 2020, pushing office yields down further and driving investment volumes up,” says Marcin Kocerba, Associate, Capital Markets, Cushman & Wakefield.

“At the end of 2019 there was 780,000 sqm of office space under construction, of which nearly 88 percent was in the central zone. The robust development activity in central Warsaw is due to the concentration of new office projects in the vicinity of Daszyńskiego Roundabout and the Central Railway Station. By contrast, development activity in non-central locations has declined, with new projects being developed in prime areas enjoying easy access by car or public transport, or as further phases of well-known office complexes,” says report author Jan Szulborski, Senior Consultant, Research and Consulting, Cushman & Wakefield.

By take-up, new leases accounted for more than 60 percent of all deals, while renegotiations and expansions made up 34 percent and 6 percent, respectively. Due to the tight new supply and limited availability of existing office space, many tenants decided to continue their occupancy or to sign pre-lets. Approximately 225,500 sqm was transacted under pre-lets which accounted for around 42 percent of all new deals on the Warsaw office market in 2019.

At the end of 2019, pre-lets accounted for 70 percent at office projects scheduled for delivery in 2020 and for 86 percent in the vicinity of Daszyńskiego Roundabout, Warsaw’s hottest destination for tenants. Cushman & Wakefield estimates that approximately 13% of office space in the pipeline for 2021 has already been pre-let.

One of the headline trends on the Warsaw office market in 2018 was the rise of flexible spaces, with demand from flexible space operators totalling 93,400 sqm. Following the period of rapid expansion and lettings in premium locations, 2019 witnessed a stable demand in this market segment and take-up at 33,400 sqm.

In 2019, Warsaw’s vacancy rate hit 7.8 percent, its lowest since 2012, which represented a 0.9 pp year-on-year-decrease. This fall in unoccupied office space was driven by robust leasing activity and the tight supply of new projects delivered to the market in the last 36 months. Vacant space in the central zone accounts for 5.4 percent of its total office stock. The vacancy rate of non-central locations stands at 9.3 percent, with the largest volume of available office space reported in Mokotów.

The upward pressure on rents is being driven not only by the strong performance of the office market and the limited availability of office space, but also by rising development and fit-out costs.

The outlook for the coming quarters is for further rental growth and scaling down of rent-free periods and financial contributions in prime locations.

“2019 was one of the most remarkable years of the last decade, with a number of record-breaking figures reported on both the leasing and investment markets. This period of rapid changes also presents a major challenge for the industry and requires regular strategic support of our advisers. We have to respond much faster and work more efficiently to finalise transactions. Thanks to the strong inflow of new capital and hardening yields, developers still want to break ground on new projects without having to considerably raise rental rates despite spiralling construction costs,” says Krzysztof Misiak, Partner, Head of Office Agency, Cushman & Wakefield.