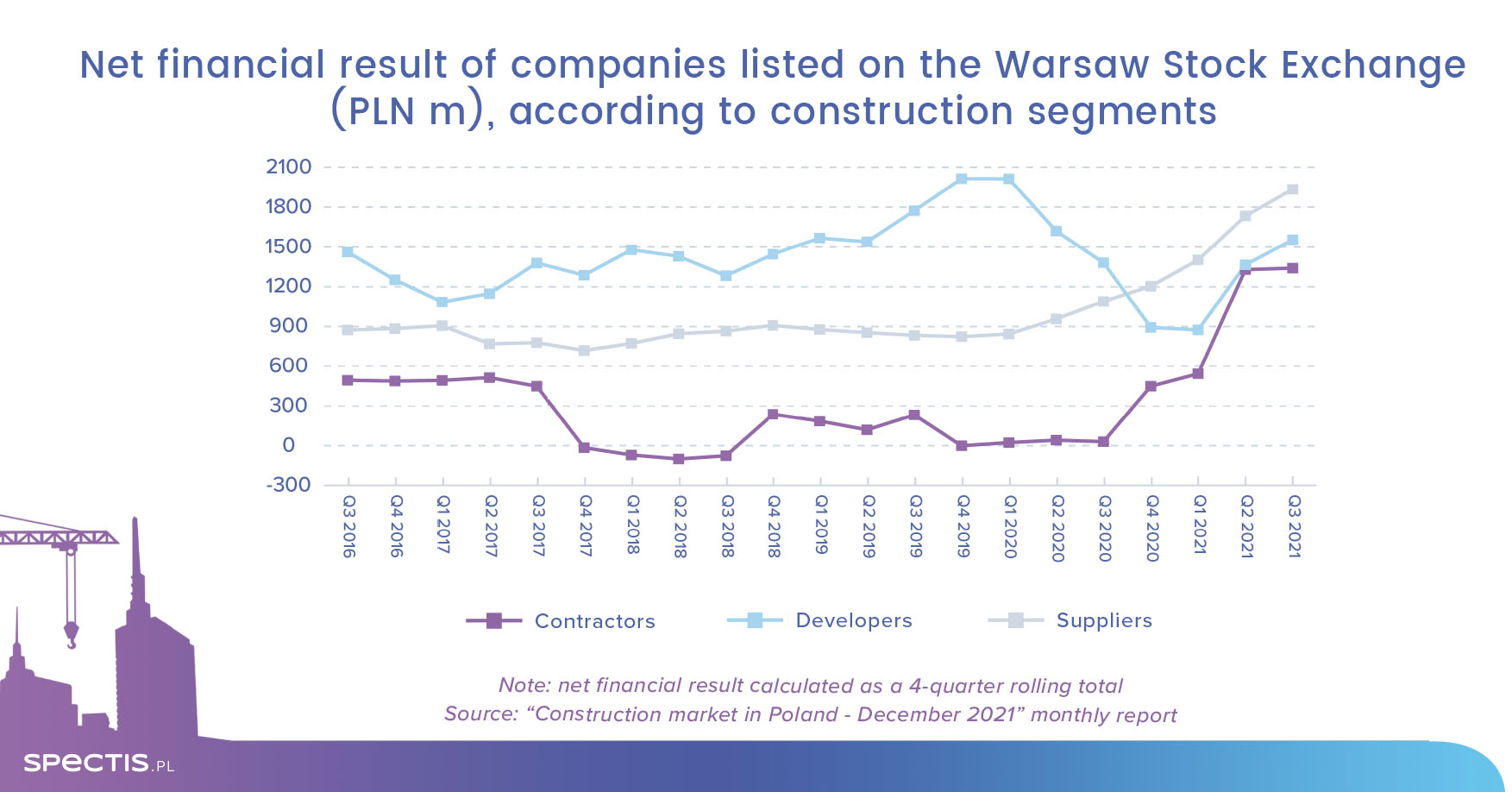 19 construction groups listed on the Warsaw Stock Exchange reported nominal revenue growth of 10 percent y-o-y over the past four quarters, which was driven by the continued hike in prices of labour and building materials. Also, the aggregate net profit posted by companies in this group improved substantially as it grew by PLN 1.3 billion over the year, though it was mostly due to one-off market developments. Notwithstanding that, the profit margin figures reported by the listed construction companies are still worse than results delivered by developers and suppliers of building materials and construction equipment.

The findings of “Construction market in Poland – December 2021”, the latest monthly report by research company Spectis, reveal that the aggregate revenue of 19 construction groups whose shares are listed on the Warsaw Stock Exchange totalled PLN 25.9 billion in Q4 2020-Q3 2021, compared to the revenue of PLN 23.6 billion registered in a year earlier, up by nearly 10 percent in nominal terms. The aggregate net profit of the analysed companies in the period under review amounted to PLN 1.34 billion, as compared to merely PLN 0.03 billion a year earlier.

The net financial result generated by the construction companies translated into a net return on sales of 5.2 percent compared with 0.1 percent a year earlier and 1 percent two years previously. Despite marked improvement, construction companies remain the only group reporting earnings below the 6 percent mark. The profitability of the other two categories of companies, i.e. property developers and suppliers of building materials and construction equipment, was much higher as they stood at 16.8 percent and 8.7 percent, respectively. But it should be noted that property developers saw their profit margins shrink dramatically during the pandemic (from the record 29 percent at the turn of 2019 and 2020), while suppliers managed to improve their profitability (from 6.1 percent a year earlier).

Among property developers listed on the WSE, Dom Development, Atal, MLP Group, Echo Investment, and Marvipol posted the highest net profit margins in the past four quarters. In terms of value, the strongest improvement was registered by Atal and Warimpex.

As far as producers and suppliers of building materials and construction equipment are concerned, in the past four quarters, the groups of Kety and Stalprodukt recorded the highest net financial profits. They accounted for around half of the profits generated by all the suppliers. Robust profit figures in excess of PLN 100 million were also delivered by Bowim, Rawlplug, and Ferro.