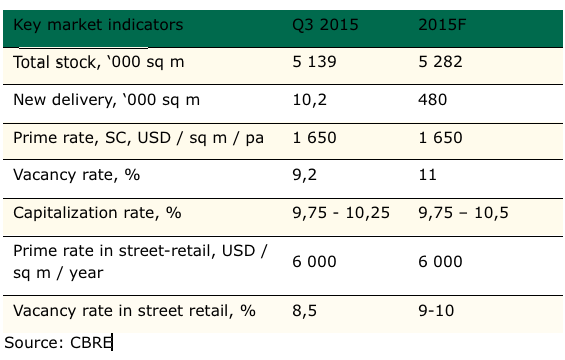 According to the latest research by CBRE, retailer demand for retail space in Moscow remains weak.

The decrease in real disposable income is forcing consumers to switch to cheaper products. According to Sberbank-CIB, 69 percent of consumers followed this course of action in Q3 2015 compared to 63 percent in the previous quarter. Meanwhile, 65 percent of consumers began to cut spending even on everyday goods, and to choose more affordable grocery stores. The reduction in the purchasing power of personal incomes is continuing to affect retail sales, which in real terms fell by 8.5 percent in the first nine months of 2015. At the same time, large FMCG retailers are more resilient in the current situation, and are showing a 10-30 percent growth in turnover due to the opening of new stores.

CBRE expect that delivery in Q4 will reach 143,200 sqm GLA in five new shopping centres. Three of these (Avenue South West, RIO on Kievskoye highway and Kalita) are already at the final stages of fit-out, and will very probably be opened on time. Galereya Kutuzovsky and the retail gallery in MFC Evolution Tower that were scheduled to open by the end of 2015, will now be put in operation in 2016.

DEMAND
According to CBRE estimates, net absorption of retail space in Q3 fell to 4,100 sqm.

Two brands (American Eagle Outfitters and Desigual) left the market as a result of chain optimisation and new development strategies. In total 6 brands left the market during the first nine months of 2015.

In the shopping centres that were opened during 2014-2015, the amount of vacant space is steadily decreasing. This is largely due to the flexibility of owners on commercial terms. This prompted 11 out of the 29 new brands that came to Moscow this year to open their first stores in new shopping centres.

The decline in consumer activity is mainly being reflected in the visitor numbers in regional and super regional shopping centres, which are having difficulty retaining traffic as consumers spend less on entertainment and large purchases. Footfall in these centres reduced by 10-15 percent on average compared to the previous year. However, projects with a favourable location and consistently high traffic are hardly suffering from loss of customers.

Around 75-80 percent of market players switched to rental rates in Rouble equivalent, which in 70 percent of cases is calculated as a percentage of turnover. At the same time, rental rates in USD continue to decline: prime rents decreased by 3 percent compared to Q2 2015, and amounted to $1,650/sqm/year.

STREET RETAIL
The vacancy rate in Moscow high streets in October 2015 reached 8.5 percent, or 39,530 sqm. The increase in average vacancy is mainly caused by an increase in the vacancy level on some streets. For example, vacancy on Leninsky Avenue increased by 20 percent, it doubled on Petrovka Street, and rose by 2.5 times on Myasnitskaya Street.

Among the most significant openings in the third quarter were the openings of the Pandora boutique on Tverskaya Street, the Falconeri store on Kuznetsky Most Street, Celine in Tretyakovsky Proezd, and the first Modbrand boutique in Stoleshnikov Lane.

A significant event in the street retail market in September was the refurbishment of more than 15 streets within the Garden Ring. New retail destinations can be used by retailers for development of their chains and produce more favourable conditions for existing outlets.

Michael Rogozhin, Managing Director, Retail department, CBRE, Russia, commented: “Such fundamental factors as significant decline in GDP and real income of consumers continue to have a negative impact on retail trade and, as a consequence, the volume of absorption of retail space. The slowdown of new retail space supply in the Q3 was a temporary deterrent to growth of vacancy rate, peaking at the end of 2015. In 2016, the market is expected to start a gradual recovery of supply and demand balance, supported by decline in new construction and growth of business and consumer activity.