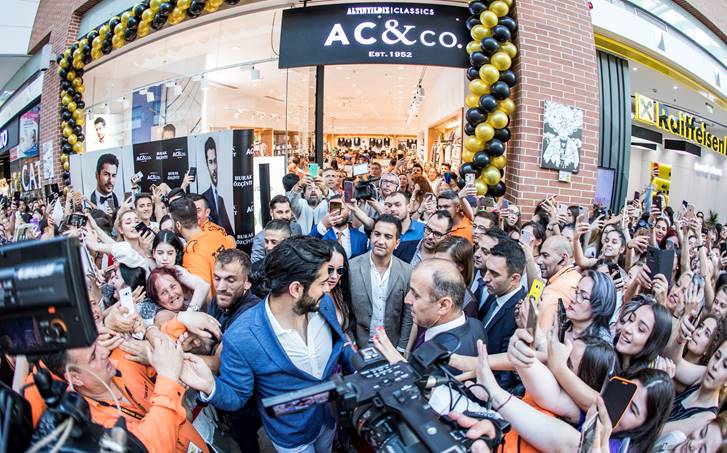 AC&co opens its fourth store in Romania, after just one year of activity – EuropaProperty

A new AC&co store, the Turkish fashion brand for men, has opened in Bucharest. One year after they entered the Romanian market, the company has expanded reaching a total of four stores in Bucharest. After Sun Plaza, Fashion House and Park Lake, now AC&co has chosen AFI Palace Cotroceni for their fourth store.

The store was opened by Burak Özçivit, a famous actor from Suleyman the Magnificent and Endless Love. One of the most loved Turkish actors, Burak Özçivit, came to Romania, especially for the inauguration of the store.

Burak Özçivit is the brand ambassador of AC&co, which represents the modern man, elegant and with charm, as well as the business-casual man, who knows how to wear classic clothes.

Füsun ARAMAZ, the Ambassador of Turkey in Romania, was also be present at the opening.

“Since Deccember 2017, when we opened our first store, we believed that Romanian men have developed an interest for fashion and elegance. The appreciation and the positive feedback that we received in the last year, convinced us that it is the perfect moment to open our fourth store in Bucharest,” commented Osman Çavuşoğlu, Operations and Sales Director at AC&co.

The company expects that this 4th store in AFI Palace Cotroceni will be very popular with customers, due to its location in the center.

Altınyıldız was established with the aim of being the brand that introduced Turkish fabric to the world and started its activities in 1952. In 2009, the company established AC&co (Altınyıldız Classics) by combining fabric expertising with apparel. The brand is rapidly growing in the menswear industry. To date AC&co has four stores in Romania. The goal for the company in Romania is to reach 25 stores in five years.