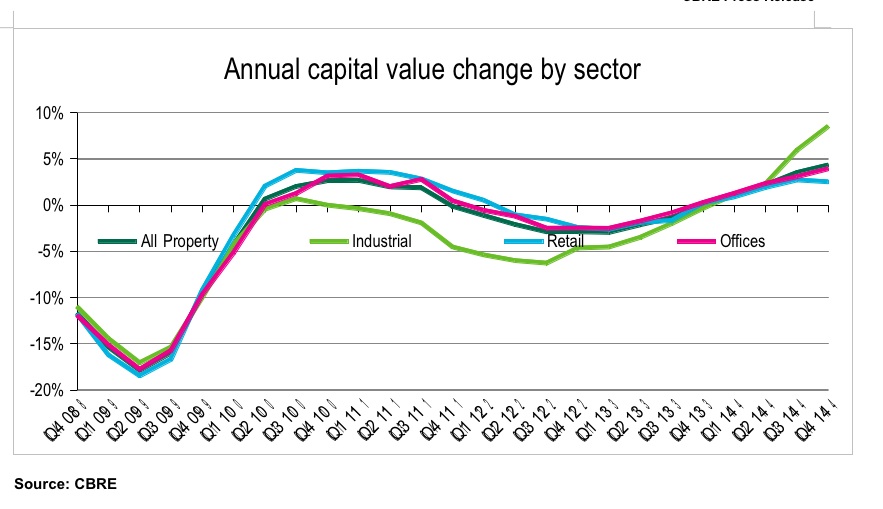 Property values across all asset classes in Europe grew for four consecutive quarters in 2014, the first time since 2007, driving CBRE’s All Property Capital Value Index to rise 4.3 percent, according to CBRE’s latest European Valuation Monitor.

The UK was the strongest performer in 2014 with values rising 12.9 percent on Q4 2013. Values in Southern Europe rebounded in the second half of the year to see a 3.6 percent rise year-on-year, and there were also positive levels of growth in France and Germany of 3.3 percent and 2.7 percent respectively.

The industrial sector was the best performing asset class with values rising 8.5 percent in 2014, with offices seeing 3.9 percent growth and retail 2.5 percent.

Central and Eastern European (CEE) markets continued to see property values fall quarter on quarter (-0.4 percent in Q4) led by a decrease in the office and retail markets. This is largely down to older stock coming under pressure from new developments in the region. However, industrials in the region saw an increase in values of 3.8 percent in Q4 and were up by 9.1 percent year-on-year.

Matthew Edmonds, Analyst, EMEA Valuation and Advisory, CBRE, commented: “Equivalent yields have compressed across the full spectrum of real estate quality for the first time since 2007, suggesting that investors are now looking at all sectors of the commercial real estate market and although their focus remains on prime they are increasingly considering assets further along the risk curve, moving into secondary and more peripheral markets.”

Valentin Gavrilov, Head of Research, CBRE, Russia, commented: “In Russia capital values in 2014 decreased on average by 25-35 percent under the influence of growing vacancy and high financial market volatility. This decline remains heterogeneous, and properties with low vacancy indicate higher resilience against downward pressure on the asset prices. In 2015 the latter will continue, driven by weakening economic activity and high new deliveries due to the completion of current projects in the advanced construction stages. The potential of additional decline in prices is estimated at around 10-20 percent. However, it is worth mentioning that increasing probability of economy “soft landing” scenario assumes that capital values might start recovering already in early 2016. In I&L segment this trend might appear even in H2 2015.”