CBRE has published the results of its extensive Shopping Centre Index analysis, which annually assesses the performance of regional shopping centres over the past year. The main criteria are footfall, achieved turnover, the value of the average basket, rents, and vacancy rates. In addition, the 10th-anniversary edition was exclusively complemented by two surveys: customer behaviour and the expected development and plans of the retailers.

The obtained data show that the footfall in regional shopping centres in 2021 remained at similar levels compared to the previous year and the year-round total fell by 27 percent behind the figures for the pre-covid year of 2019.

“Even though the footfall numbers suggest a change in customer behaviour, the trend in turnover shows that it is mainly a different frequency of visits and their planning. This is also confirmed by the year-on-year increase in the average basket by more than 10 percent to almost CZK 260 per visit to a shopping centre. The more positive news is that last year, during the long-lasting lockdown, there was no such significant drop in footfall, which reached up to -70 percent in 2020. This is one of the reasons why retailers’ annual turnovers fell by more than 25 percent the year before last. However, last year, from the total turnover point of view, it brought recovery of almost 15 percent,” commented Klára Bejblová, Associate Director – Retail Research for the Czech Republic and CEE region at CBRE.

The shopping centres recorded very good results practically immediately after the reopening of the shops. These were motivated by, among other things, delayed consumption and on average they approached the 2019 turnovers. Despite this, the overall result of the turnover was affected by the 18-week lockdown, and so last year fell behind 2019 by about 15 percent.

The sector that saw the lowest drop in turnover (by “just” 6 percent) compared to 2019, was specialised retail. This result significantly affected the categories of goods not subject to sales restrictions. These were mainly the categories of Optics & Pharmacies (+11 percent) and Health & Beauty (-5 percent). These were followed by Electronics with a long-running online platform, which maintained one of the lowest drops in both years. While large-scale operators achieved better results in 2020, in 2021 the decline of only 14 percent compared to 2019 was driven by smaller specialised electronics stores (like iStores, Xiaomi and ETA)

The most significant recovery compared to 2020 was felt by the sectors of Food & Beverage and Services, which together with leisure activities were fundamentally affected by protective measures even after the reopening of operations. Food & Beverage, which was the most dynamically growing segment in the pre-pandemic period, and which recorded an increase in revenues from -35 percent in 2020 to -17 percent in 2021 (compared to 2019), was positively influenced mainly by fast-food operators. In response to government constraints, they introduced take-out windows and began offering the wider delivery of their refreshments. Restaurants with a drive-in option also achieved very good results. 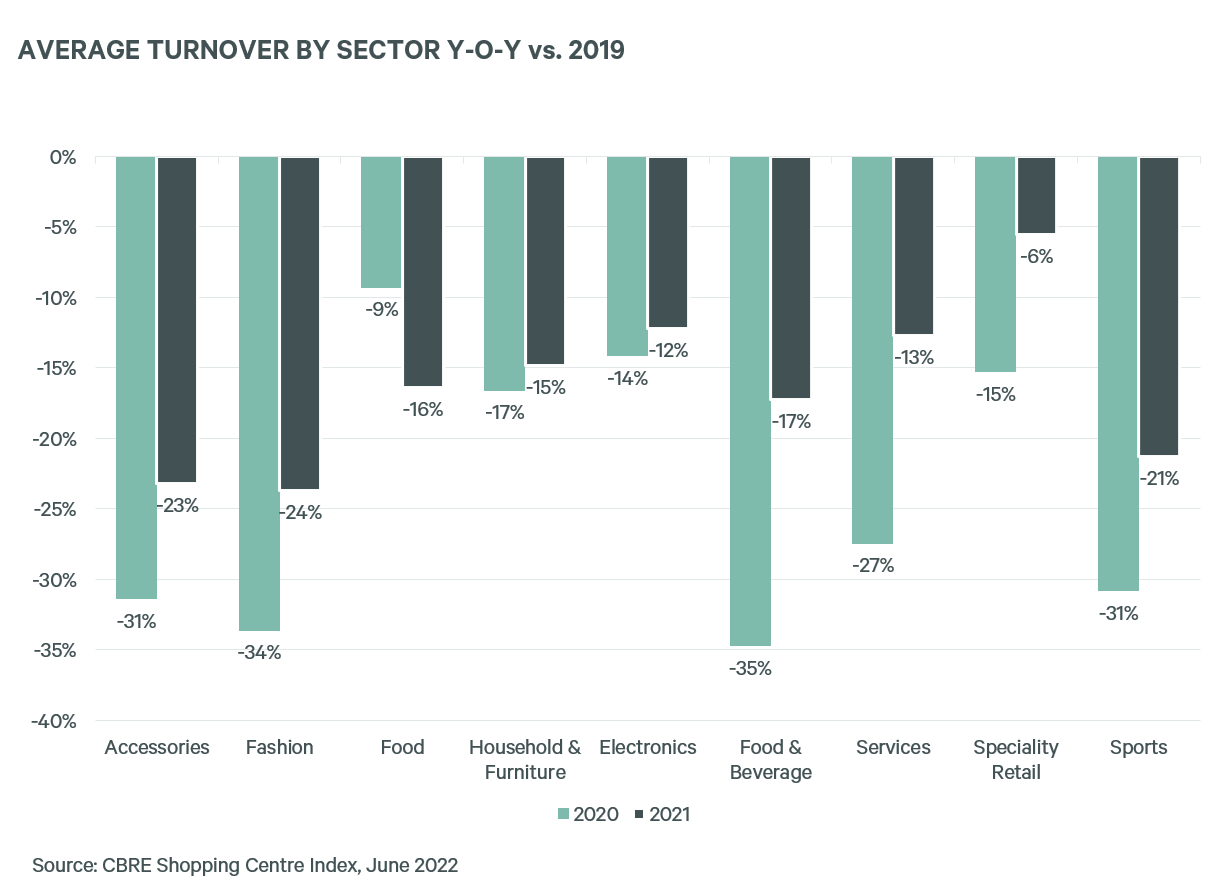 Despite a considerable recovery, the results of the whole year in the Fashion, Accessories and Sports sectors in 2021 were below a 20 percent decline compared to 2019. In Fashion, the best results were seen by the offer for Young apparel with a drop of about -10 percent and Lingerie stores with -17 percent. Only a slight improvement and a total decrease of almost 40 percent were recorded in women’s fashion, where CBRE has already registered several brands leaving the Czech market. A significant difference was recorded in the Sports sector when comparing large-format operators (representing an assortment of sports equipment) with smaller shops (with a predominance of sportswear and accessories). For the former, there was an improvement from -28 percent to -14 percent compared to 2019, while for the latter it was only from -33 percent to -27 percent.

Average rents increased by about 1 percent

The vacancy rate of regional shopping centres remained almost unchanged in the year-on-year comparison at 4.4%. Thanks to ongoing government compensation programmes and the interest of shopping centre owners, there was no significant correction of average rents in 2021, which, on the contrary, increased by less than 1 percent compared to 2020. Nevertheless, taking into account the indexation, which was 3.2 percent according to the Czech Statistics Office, it follows that the average level of rent of newly-leased premises decreased by more than 8 percent year-on-year.

The highest and also continuing growth in rents, which increased by 6 percent year-on-year in 2021 and 11 percent compared to 2019, was recorded by the electronics sector. It was mainly driven by “step-up” rents (which increase over time) at specialised electronics stores. A very common feature was the optimisation of space and the branch networks in individual operators. The effect of the change in the space had a significant effect on the correction of rents in the Services sector, where the average rental increase was 4 percent year-on-year, but the average unit size decreased by 4 percent. On the contrary, in the Household & Furniture sector, the average rental fell by 3 percent, but the average unit area increased by 8 percent.

The highest growth dynamics of average rents were once again reported by the smallest units up to 100 sqm, by 2.9 percent (0-50 sqm) and 1.9 percent (50-100 sqm) year-on-year. Compared to 2020, there was no decrease in average rents for other size categories above 100 sqm, however, the significant decrease caused by repeated restrictions on retail at the end of 2020 affected the rent levels so that the resulting figures in 2021 were still below the level of 2019.

The total retail sales increased in the Covid years. Thanks in part to e-shops

The ever-increasing purchasing power of the population has been largely spent on retail in recent years. Total retail sales increased by 0.1 percent year-on-year in 2020, while last year by 4.5 percent. During the lockdowns, however, purchases moved mainly to the online environment. Thanks to this, online increased year-on-year by 27.3 percent in 2020 and by 15.7 percent in 2021. This is also illustrated by the current CBRE survey among retailers. While 13 percent of the brands surveyed generated 21-30 percent of their total turnover in the online environment in 2019, it is currently 32 percent of the brands. We can observe an even more noticeable difference at retailers whose e-shop revenues account for 31-40 percent of their total turnover. Before 2020, none of the companies surveyed had reached such levels, while this year it is already 16 percent. In this context, there is an interesting comparison with the EMEA region. As part of the CBRE survey, only 19 percent of retailers reported that they achieved online sales between 21-30 percent and only 2 percent of respondents mentioned a share of online sales above 31 percent of the total turnover. These results illustrate the fact that the e-commerce platform in the Czech Republic has already found its place and has a long tradition. Moreover, with the advent of the pandemic, this trend has intensified. 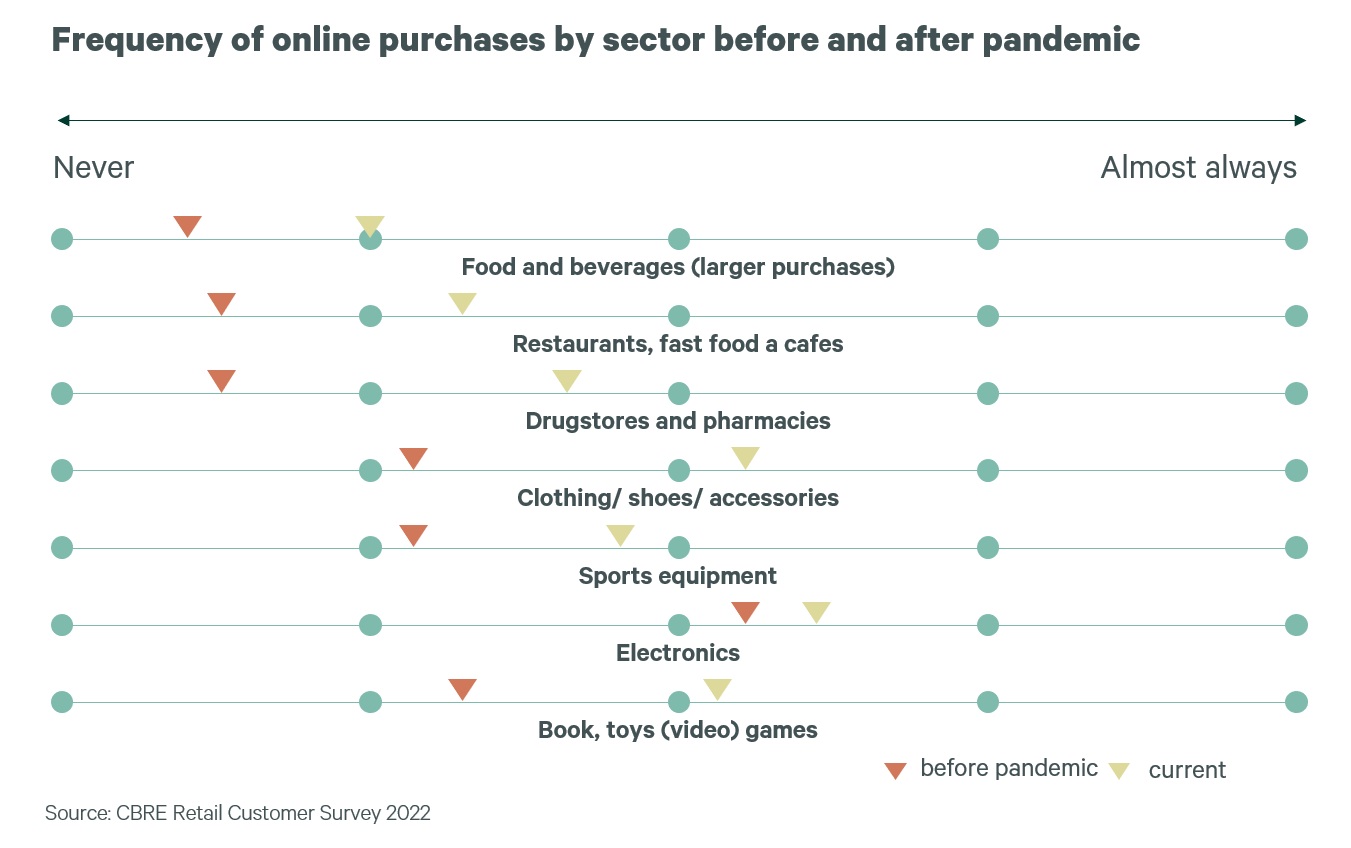 “The coronavirus pandemic changed the customer behaviour and forced retailers to optimize sales channels, some of them also introduced new channels. For the future, the appropriately set ‘omnichannel’ strategy, combining multiple sales and communication channels, will play a decisive role in business success,” said Jan Janáček, Head of Retail Sector and Advisory & Transaction Retail at CBRE, commenting on the results of the current survey: “If we assess turnover generated solely in physical stores without online sales, then 56 percent of retailers are currently at somewhere between 100-75 percent of their original pre-pandemic level and 12 percent are even higher than in 2019. It is interesting to compare with the EMEA region, where the return to the pre-Covid condition has taken place noticeably faster. Altogether, 36 percent of brands generate higher turnover than in 2019 and 40 percent are between 100 and 75 percent. Among other things, the significantly higher inflation in the Czech Republic compared to the Eurozone may have an influence.”

The dynamic growth of inflation and the associated reduced purchasing power of customers are perceived by most retailers (92 percent of respondents) as the most significant threat to sales shortly. More than 50 percent of respondents admitted concerns about supply chain disruption, and 36 percent of the brands were scared of a sharp increase in wage costs and a slower recovery of tourism. A long-term labour shortage remains an equally critical factor for retailers. On the other hand, only 24 percent of respondents see another wave of Covid-19 as a potential risk (as opposed to the EMEA region, where the vast majority of retailers consider a potential autumn wave of the pandemic to be the biggest risk).

However, despite the aforementioned concerns, retailers are bouncing back after two difficult years, and almost three-quarters of respondents even plan to expand and open new branches in the foreseeable future. These are particular companies from the Sports and Food & Beverage segments. Fashion and Health & Beauty brands are also preparing to expand, but at the same time, they expect to close non-profitable stores.

Customers have moved part of their purchases to the online environment. However, they prefer the option to pick up in person

The second CBRE survey focused on customer behaviour. It shows that people learned to shop online during the pandemic. “People are currently buying food in e-shops 2 times more often than before the pandemic, which means every fourth purchase. For drug and pharmaceutical goods, it is 3 times more often and 2 times more often for clothing and footwear. People are having refreshments from restaurants and cafés delivered up to 3 times more often, but at the same time, they physically visit these businesses at a similar frequency as before the pandemic. They probably need to rest after a long period of home cooking, and they seem to be cooking less than they did in the past. Electronics were often bought online before the pandemic, so it only recorded a minimal increase, but even so, customers make every second purchase online,” said Pavel Urban, Head of Property Management – Retail and Marketing – Retail at CBRE.

He added: “If customers buy goods from an online store and can also pick them up at a shop in a nearby shopping centre, three-quarters of people prefer to pick them up in person. In the category of 18 to 25 years of age, it is even 95 percent. Young people, while spending a lot of their lives in the online world, also desire a personal experience. Other customers will combine picking up a package with other purchases or running errands. Thus, it is imperative to start perceiving both worlds (online and offline) synergically. Retailers should try to satisfy the needs and wishes of the customer and it is evident that connecting the brick-and-mortar store with an online environment is convenient for customers.”

Most people see the main advantages of online shopping as the possibility of comparing prices, as well as saving time and getting a wider choice of products. Only a minimum of people perceive the advantage of online shopping as the possibility of avoiding places with a higher concentration of people, i.e., the fear of getting an infectious disease has already become a negligible barrier. 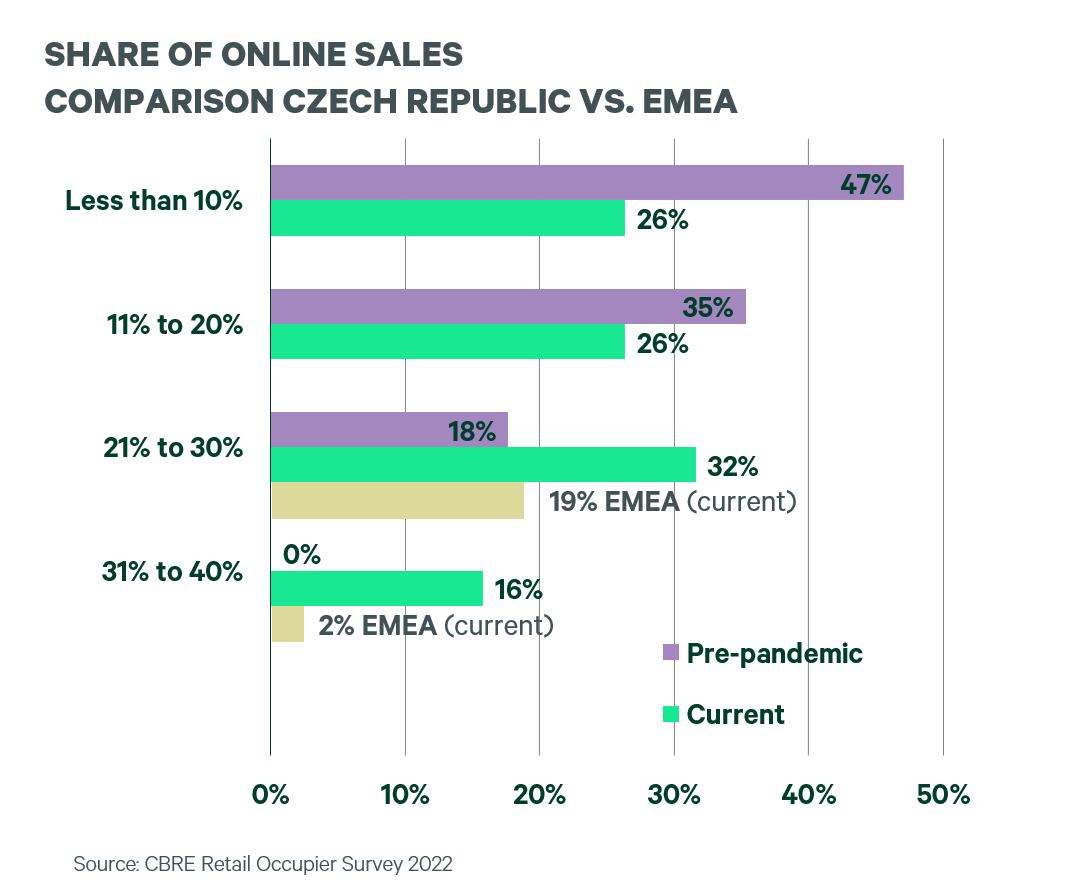 According to current turnover figures and traffic, we can say that customers have returned to the centres and that they like to shop in the brick-and-mortar stores. Meanwhile, most prefer social and shopping centres with a range of leisure activities (two-thirds of customers aged 18-34). However, it is clear that smaller, regional centres with a wide range of services and local retailers, as well as retail parks, also sharply increased in popularity during the pandemic.

“As far as current customer concerns go, 86 percent of the respondents in our survey said they have felt price increases and intend to adapt their behaviour by reducing spending. They want to save most on visits to restaurants and cafés, but also when buying electronics, household equipment, sporting goods, clothing and footwear. They also want to reduce spending on entertainment. On the contrary, they do not want to save on food and currently even on travel. After years of Covid, people need to enjoy this year’s holiday to the fullest,” concluded Pavel Urban.