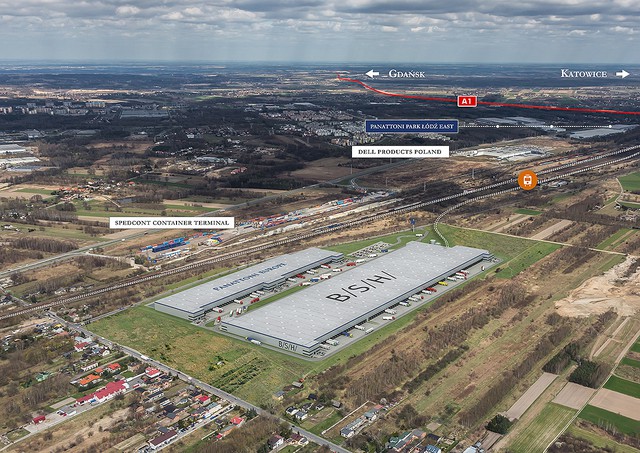 Panattoni Europe to embark on another large-scale warehouse project. This time, the developer will deliver a logistics centre spanning nearly 79,000 sqm for BSH Sprzęt Gospodarstwa Domowego. The warehousing section will account for more than 97.5 percent of the entire space, with as much as 77,000 sqm, while premium office space will take up 1,7000 sqm.

Given the special emphasis placed by BSH on environmental protection and environment-friendly logistics solutions, the investment will have its own railway siding, so that the majority of production earmarked for exports will transported by rail. That is why the developer is to build a railway station inside the facility with a platform running the entire length of the building (590m). Moreover, the building will feature a special ramp system, LED lighting, as well as additional skylights and facade windows, to maximise access to natural light. Construction works are planned to begin in the coming May, and completion of the investment is anticipated in the spring of 2018.

In Poland, BSH offers home appliances under such brands as Bosch, Siemens, Gaggenau and Zelmer. The company has four factories in Poland – three in Łódź, making washing machines, dishwashers and clothes dryers, and one in Rogoźnica near Rzeszów, where small home appliances are made under the Zelmer brand. Two factories, which will make built-in ovens and fridges, are currently under development in Wrocław. The new logistics centre will be used by the company to handle exports of all the products made in BSH factories in Poland, and also for the purposes of domestic distribution. The facility will also process the supplies of components for production to be used in BSH factories in Poland and abroad.

Robert Dobrzycki, Chief Executive Officer Europe, Panattoni Europe, commented: “The development for BSH is another example of a Panattoni Europe investment which will empower the tenant to boost the effectiveness of its logistics operations by consolidating them, and boasting one of the top locations in Poland, it will enable access to other facilities not only at the national level, but also Europe-wide.”

“For more than 23 years, Łódź has been a strategic point of BSH’s map of Poland and Europe. This is where the first Polish factory in our organisation was opened. That is why we are happy to announce another investment in Łódź,” said Paweł Trojanowski, Head of Logistics Division, BSH Sprzęt Gospodarstwa Domowego.

The new investment will become part of the BTS BSH, located at ul. Jędrzejowska. The facility will stand right next to the A1 – the only Polish motorway running north-south. It will be just 30 km away from the Łódź Północ junction, where the A1 and A2 motorways intersect. The perfect location in Central Poland with access to the junction of the European east-west and north-south routes, as well as within administrative city limits, will facilitate BSH’s domestic and international logistics, as well as making it fast and easy for employees to get to/from work.