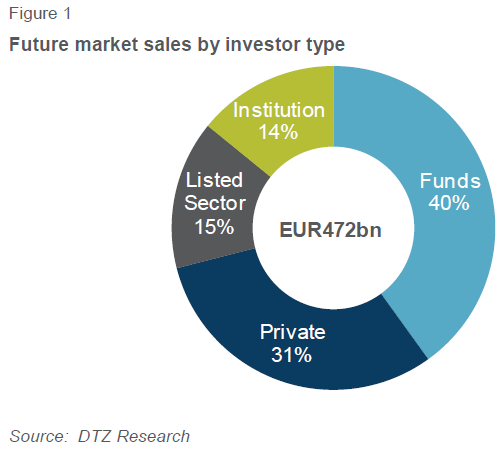 According to DTZ, €472 billion of commercial real estate assets could be released onto the European market. Most of these assets belong to unlisted funds (€190 billion) and private investors (€149 billion), both of whom have a proclivity towards comparatively shorter hold times.

Almost 30 percent of the real estate that could be made available on the market belongs to listed companies and institutions. However, these have decreased the sizes of their portfolios, which could limit opportunities to make sales.

“Investors hold €472 billion in commercial real estate assets which could be released to the European market due to uncharacteristically long hold periods,” said Łukasz Maciak, Director, Capital Markets at DTZ. “This situation was caused by the economic crisis and decreasing real estate values. Thanks to today’s favourable macroeconomic conditions and a loosening of financial policies, the real estate begins to appreciate, making up for previous losses, and the market participants are optimistic about the future. We expect that unlisted funds and private investors will in particular be looking for options to sell owned assets, taking advantage of capital inflows into funds investing into alternative asset classes, including real estate. Despite the fact that the first quarter was weaker than last year, transaction volume in Poland is still expected to reach €3 billion. Assets put on the market will include both new, and thus the most liquid assets, and those whose sale is forced by the investors’ investment policy.”