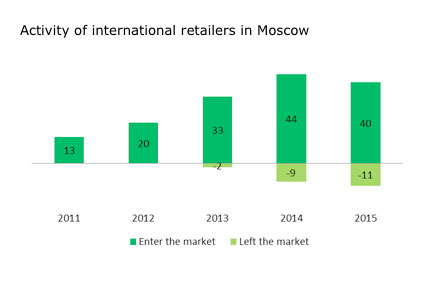 According to the latest retail research by property advisor CBRE, retail turnover and retailer margins have declined, as a result of higher prices and lower consumer purchasing power. These factors have led to the main trend in 2015 – the period of shopping centre populating with tenants has increased and the vacancy rate has gone up to 9.5 percent.

Low consumer purchasing power forced retailers and suppliers to control prices “manually”. However, new cycle of price growth can begin in 2016 due to a new round of rouble devaluation and existing product embargo.

The total stock of modern retail space in Moscow reached 5.2 million sqm, or 424 sqm per 1,000 inhabitants. As some projects’ openings have been postponed to 2016, the pace of completions have slowed down, the actual new supply was 40 percent lower than the forecast announced in the beginning of 2015.

At the same time, due to optimization of development strategy, 11 international retailers left the Russian market during the year. The most ‘painful’ for the market were exits of such retail chains as Stockmann, Camaieu, Lindex and Rockport.

The trend of technical openings and the growth of average vacancy rate due to reducing retailers′ activity increase the interest of developers to unusual tenants. For example, in some shopping malls chain retailers were replaced with private entrepreneurs. Some unusual formats like farmers markets, dancing studios, art galleries, interactive theatres, quests appeared in shopping malls.

The key trends of the retail property market for 2016:

Michael Rogozhin, Managing Director of Retail Department CBRE in Russia, commented: “As a result of the economic crisis, access to financial instruments for the developers became prohibitively expensive, and start of new projects became unprofitable. Thus, probability of new shopping malls development starts during 2016 is very low. Projects at an advanced stage of construction with secured financing will be completed with high certainty. The same is true to the developers that will be able to find co-investor, for example large retailer. Increased competition together with declined retail sales may encourage some owners to conduct a re-conception, tenant rotation or re-positioning of their schemes.

There is still an imbalance between supply and demand in the Moscow retail property market: new delivery of shopping malls exceeds absorption of retail space. Thus, vacancy rate will continue increasing and could reach 11 percent in 2016. In 2017 after twofold reduction of completions and given economic recovery, the vacancy rate could start declining.”