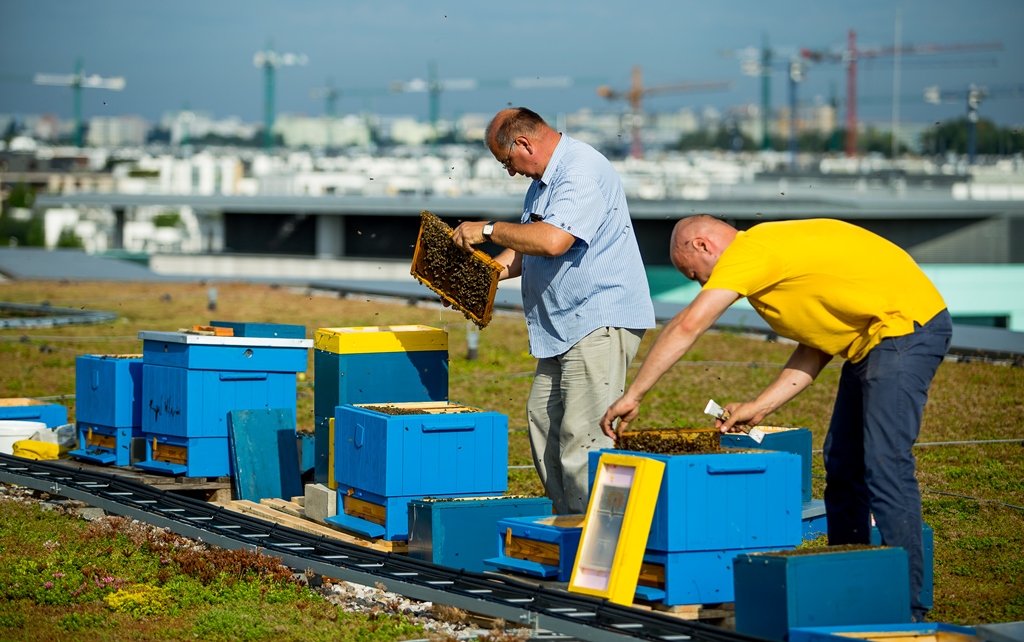 You can like your workmates or not, but who wouldn’t like to boast sharing an office with a potentially most laborious creature – a bee? Thursday 18 August saw the opening of an apiary installed on the roof of Royal Wilanów, an office building. Along with Eurocentrum Office Complex, it is yet another bee haven located atop a building owned by the Capital Park Group.

“The initiative to install beehives on the roof of Royal Wilanów, promoting urban beekeeping, is an element of a wider vision pursued by the Capital Park Group as part of its Office Plus programme,” said Kinga Nowakowska, managing director at Capital Park. “This programme combines environmental actions such as support for alternative forms of transport, carpooling, waste segregation, ecological education or so-called urban farming including beekeeping with actions aiming to create friendly workplaces. We also want to engage in positive undertakings that benefit local communities – for example, we have provided over 6,000 sqm of open recreation and sports space around Royal Wilanów, with a playing field, trampolines, a climbing wall a skimboard track and other features. The installation of the apiary is yet another element of this mosaic.”

The launch of the apiary that is comprised of five beehives was accompanied by samplings and a mini-workshop devoted to flavours and properties of various types of urban honeys. Plants coming into blossom in cities are much more diversified than those we can come across in the countryside, therefore urban honeys are characterised by original colours and interesting flavours. The latter include a chestnut-willow or a lime-hawthorn flavour not occurring in similar products of their kind.

120,000 bees are required to produce 1 kilogram of honey. To do that, they have to travel as many as 150,000 kilometres and collect nectar from 4 million flowers. The effect of their effort can be used in the kitchen to prepare all kinds of dishes ranging from soups to desserts, in therapies (honey will remedy simple problems such as a sore throat but will also relieve rheumatism and arthritis pain, strengthen the cardiac muscle, reduce blood pressure and speed up wound healing), and in skin care – honey is a great material in the formulation of bath products, masks and creams.

In the face of a mass extinction of bees scientists seek to develop an alternative method of plant pollination as bees are still irreplaceable. Pursuing this idea, scientists from the Warsaw University of Technology have built the B-droid or a prototype of a mechanical bee. The B-droid is not steered by man. It is able to find a flower all by itself, collect pollen and transfer it further. It will excellently pass the test where a big precision of pollination is needed – the Warsaw University of Technology writes in its press materials.