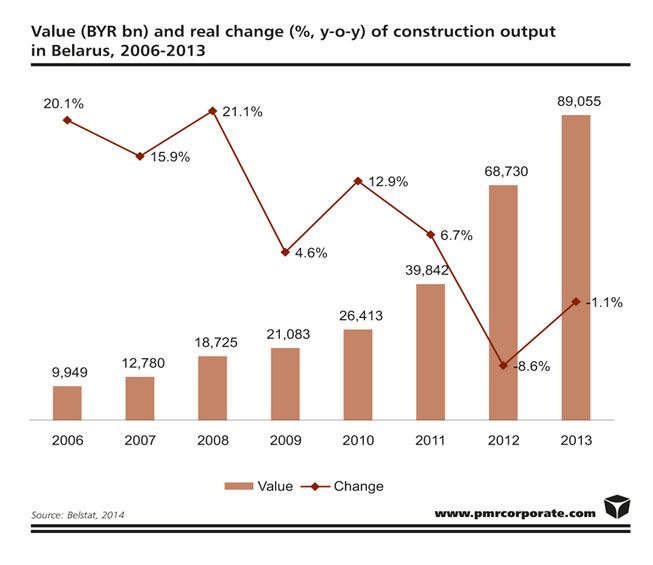 Belarusian non-residential construction sector to expand by 1.3 percent in 2014 – EuropaProperty

Until 2012, the construction industry had been one of the key drivers of the Belarusian economy. Strong growth rates in construction had been largely achieved on the back of state supported infrastructure development programmes. However, this trend has cooled down significantly in the last couple of years.

As indicated by the results of PMR’s latest report, entitled “Construction sector in Belarus 2014 – Development forecasts for 2014-2019”, the Belarusian construction industry contracted by 1.1 percent year on year in 2013, after a more severe reduction of 8.6 percent achieved a year before.

In 2013 the industry’s growth performance continued to deteriorate. Among the key factors contributing to the decline in construction activity were:

Poor wider economic growth performance, with the official GDP growth rate falling to 0.9 percent in 2013 from 1.7 percent a year earlier, a weak performance in the industrial sector, which recorded a 4.8 percent decline year on year and a high base set after 11 years of continuous growth between 2001 and 2011.

Government-targeted programmes aimed at modernising the country’s transport, energy, and social infrastructure has played an important part in the construction industry’s evolution in recent years. In addition, large projects implemented as part of the preparations for the 2014 Ice Hockey World Championship have provided an additional boost to the market. Furthermore, the state’s determination to increase the country’s housing stock has supported a solid upward trend in the residential construction segment, as well as a steady increase in real disposable income, which has boosted retail sales and, ultimately, encouraged construction activity in the retail and service sector.

Looking more closely, new construction is estimated to have recorded a slight decline in 2013, by about 0.5 percent to BYR 82,364 billion (€7 billion). The major reason for the 1.1 percent year-on-year contraction in construction output was the area of extensive renovation and modernisation, which dropped by 10 percent. The minor repairs segment also saw a significant decline of 6.7 percent, although the segment was responsible for only 4 percent of construction output in Belarus last year.

The construction industry is overwhelmingly dependent on funding from the state and local budgets as well as from state-controlled companies, especially in the civil engineering sector. In the last couple of years, Belarus’ financial condition has significantly worsened, which has forced the government to cancel or delay many expensive construction and reconstruction projects, particularly for developing the country’s transport infrastructure networks. According to PMR, the civil engineering construction output tumbled nearly 10 percent, largely due to weak economic growth and high base effect set up after two years of solid growth rates.

The negative performance in the civil engineering sector was partly compensated by impressive growth witnessed in residential construction. Housing completion resumed an upward trend in Belarus in 2013, after two years of double-digit declines. According to preliminary data, the total floor space of residences put into use in 2013 increased by 17.6 percent to 5.27 million sqm – the third highest result of the past two decades.

PMR estimates that the residential construction output surged by 16.4 percent in 2013, largely thanks to a low base effect created after a contraction of nearly 30 percent recorded a year earlier. About 4.6 percent of housing space activated in Belarus in 2013 was developed with funding from state and local budgets. This share has changed little over the past three years. Another 4.8 percent of 2013’s supply was developed with residential real-estate developers’ own funds. In addition, 46.9 percent and 49.2 percent of housing space activated across the country in 2012 and 2013 respectively was self-funded by individual builders.

In 2013, the number of one-room apartments completed over the year accounted for 26 percent of new supply, a 28 percent decline on the previous year. The share of new two-room supply is also estimated to have decreased, by 2 percentage points. Last year, less impressive results in the completion of one and two-room apartments were due to a significant deterioration in the construction activity of real estate developers, which are typically responsible for the construction of such dwellings in Belarus.