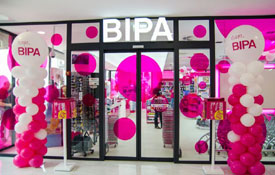 Since entering the local market, BIPA has been pursuing a steady expansion, opening around 10 new stores every year. In 2016, the chain invested €4 million in business development and opened 11 new units in Croatia.

At present, the company operates a total of 90 stores across the country, employing 445 people. Its assortment encompasses nearly 8,000 cosmetics, health, home and gift articles by the renowned international brands Rimmel, Max Factor, L’Oreal, Maybelline, Bourjois and numerous others.

Established in 1980, BIPA is positioned as the largest drugstore chain in Austria. Its parent company, Rewe Group, is one of Europe’s leading trading and travel companies with a turnover of over €54 billion.