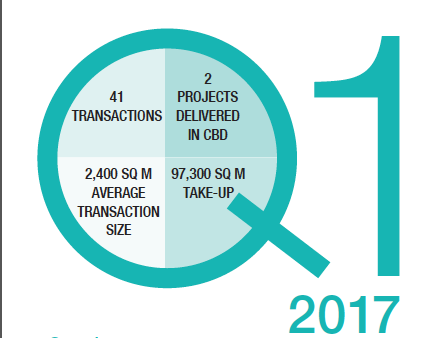 Over 55 percent of Q1 total take-up were renewals/renegotiations mainly in the IT&C and automotive industries. The biggest transaction was the 20,000 sqm renewal/renegotiation in Pipera and the upcoming two were the 10,300 sqm in Calea Floreasca/Barbu Văcărescu, and the 10,000 sqm in Presei Libere Square. Calea Floreasca/Barbu Văcărescu was demand leader with 30 percent of the total take-up of Q1.

“The market is continuing its growth trend after the record year of 2016, even if we won’t have that many deliveries,” said Horațiu Florescu, Chairman & CEO Knight Frank Romania. “It is interesting to follow what will happen in the centre, CBD and Pipera, where, so far, we saw the biggest transaction of this year.”

The two projects delivered so far in 2017– Aviatorilor 8A and Dorobanților 33 – represent only 5 percent of the office space Knight Frank expects to be delivered by the end of the year, accounting around 200,000 sqm.

The Centre-West will be the main supply generator, with over 50 percent of class A office space planned for delivery, followed by Dimitrie Pompeiu with approximately 30 percent, but we see increasing activity also in the Centre and the CBD. The Landmark, which is the biggest project of this area, is of great interest and Knight Frank has already had three transactions this year and is estimating it to be fully leased by the end of this summer.