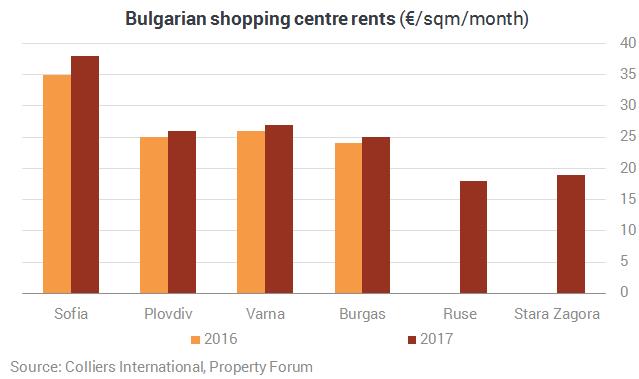 During the first half of 2017 demand and supply of modern retail space in Bulgaria have been aligning with each other, according to a new research by Colliers International. During the period, modern shopping centers retail space supply balanced with demand by keeping its previous levels of 791,760 sqm in the country and 406,660 sqm in Sofia. Together with this for a few periods now, retail space absorption has been steadily going up. During the last half-year period, it recorded an 11% increase, providing for demand – supply balance.

The share of space, leased during the period, in the well-established shopping centers in Sofia was approximately 5% from the gross leasable area – related with the fact that some of these projects had 100% occupancy rate. The largest number of new openings was registered in Paradise Center, followed by Park Center, and Serdika Center and The Mall. The average occupancy levels of the established projects in Plovdiv, Varna, Burgas and Stara Zagora stood at 92%.

Supermarkets and food chains, followed by fashion operators and the representatives of the electronics segment were on the top of the list in terms of new openings. Kaufland, Billa and Lidl kept expanding, a trend also valid for domestic retailers. Billa was actively opening locations in shopping centers. During the surveyed period, the chain rented space in Serdika Center and announced openings in Park Center and Mall of Sofia. Carrefour in Bulgaria Mall was replaced by ABO Market – a shop-in-shop concept. This development came as a result to the supermarket segment restructuring, which started during the previous half-year period. Despite the activeness of the supermarkets and food chains, the wide range of vacancy levels in Sofia shopping centers – 2-23% maintained.

New openings worth mentioning were in the food chains segment, whose representatives tend to prefer high-street locations. Wagamama and Hamburguesa Nostra entered the local market. The Finnish fast food chain Hesburger expanded to Sofia. In the furniture and DIY segment, JYSK opened a second store in Pazardzhik and three in Sofia – one of them in retail park Jumbo Plaza. Retail parks development activites, related to leasing and tenant mix enhancement, remained as a trend.

Vacancy rates stood in the range 3-15%. The retail parks rental rates were between €7-10/sqm, while the prime shopping centers rents registered a slight growth. The highest level was observed in Sofia, where it jumped from €35-38/sqm.

Colliers’ forecast for the next half-year period is for stable development of the retail property market in Bulgaria. Demand will continue to balance supply. As a result to the positive tendencies, the strong investment interest towards the modern shopping centers is expected to deepen.