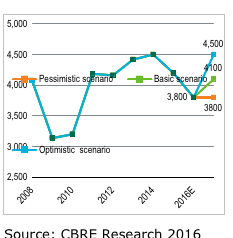 CBRE has analysed the latest trends in warehouse and industrial market of the Moscow Region, and forecasts that vacancy rate level may return to 10 percent and boost the rental rates up to RUB4,500 / sqm / year in 2017.

The realization of this scenario depends on macroeconomic improvements, and the change of the demand structure from relocations to the expansion phase. It will also be positively affected by the decline of non-contracted speculative completions to a minimum, which will offset competition between developers and constrain downward pressure on rents.

700,000-800,000 sqm of the new warehouse space is expected to be built in 2016, which is comparable to the results of 2015. Growing construction costs fuelled by inflation, and accompanied by low rental rate levels may result in a further decrease of developers’ activity in 2017, mainly through shrinkage of speculative schemes and projects of the second tier developers. The share of speculative development may decline to 38 percent in 2016 compared to 71 percent in 2015. This indicator was much higher during the pre-crisis period in 2013-2014, and amounted to 75 percent on average. In addition, the end of the relocations wave expected to happen in 2017 may become a further prerequisite for shifting away from the speculative development. As a result, annual completions level in 2017 may decrease to 500,000-600,000 sqm.

Along with the fall of the rouble, the average level of USD-denominated rents in 2014-2016 has declined to $77 versus $125 in 2007-2013, and stimulates current demand: a significant part of deals is relocation with more favourable commercial terms. Relocations to new warehouses led to vacation of the secondary market space, while expansion and growth on the market are demonstrated only by large retail chains. As a result, the market is facing low absorption levels.

Further development of the situation depends on the dynamics of economic indicators. The improvement of the economic environment will strengthen demand in 2017 and create prerequisites for return to the pre-crisis pace of the market growth (500,000-700,000 sqm of net absorption). As a result, the rental rate in warehouse segment in the Moscow Region will return to the end of 2014 mark.

Anton Alyabyev, Director, Industrial & Logistics Agency Services, CBRE, said: “Commercial terms in the market are still comfortable for occupiers. At the moment we see high business activity from them – a large number of deals are being closed, and many companies have already taken the opportunity to move to a new warehouse at an attractive price. Aside from relocations, the large market players, in particular retail chains, are acting intensively in the market letting large warehouse complexes. Next year we expect an increase in the number of such deals, and demand strengthening in the market as a whole.”

Vasiliy Grigoriev, Senior Consultant of Industrial Research CBRE in Russia, commented: “The high vacancy rate, and as a consequence high level of competition in the market, are keeping rents from growth. At the same time developers have already reduced supply volumes significantly and new projects are being launched – provided that a preliminary contract is signed by client.”