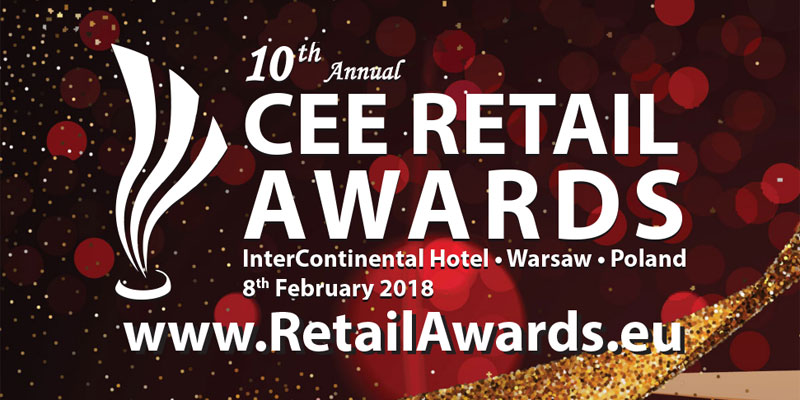 Newcomer to the region Victoria’s Secret and the prolific investor/developer Unibail-Rodamco have blazed their way through one of Central Eastern Europe’s top retail awards ceremonies.

In a significant boost to the retail real estate industry, the 10th edition of the annual EuropaProperty CEE Retail Awards, welcomed a record number of attendees, including over 150 retailers actively operating in the region.

Unibail-Rodamco almost pulled off a clean sweep of development awards, adding momentum to their development successes of 2017. The developer won Developer of the Year along with three development prizes for their projects in Poland and the Czech Republic.

Big prizes also went to Victoria’s Secret, collecting wins for Fashion Retailer – over 1,000 sqm, and Newcomer of the Year. Similarly, shoe retailer Kazar, won the coveted Overall Retailer of the Year. The company was recognised by the jury for its continued expansion, and confidence in the CEE region throughout 2017.

Innovation in the retail sector was also recognised by the Retail Institute, who partnered with EuropaProperty, and recognised several retailers for their achievements and forward-thinking practices that have shaped the changing face of the retail industry over the last year. Winners included Rossmann, Douglas, Auchan Direct, Carrefour, eObuwie, and Hala Koszyki.

Putting his achievements firmly in the spotlight, Mayland’s Maciej Kielbicki claimed the Professional of the Year award, confirming his status as one of the region’s top real estate professionals.

In the much coveted and highly contested Shopping Center Director of the Year award Carrefour’s Ewa Karska, head of shopping centre operations, shone the brightest out of all the short-listed nominees, by receiving high praise and recognition for her dedicated work on Carrefour’s shopping centre portfolio.

2017 was a big year for retail development and the project award winners reflected the changing dynamics of the region’s retail development markets. Prolific retail developer Unbail-Rodamco won three prizes for its regional development success in 2017. Wroclavia in Wroclaw, Poland won Retail Project in the large category and, in an encouraging sign for sectors improving retail offer, Warsaw’s largest shopping centre Arkadia won best F&B Concept for its Grand Kitchen, and Mayland’s Serenada in Krakow, Poland won Retail Project of the Year in the medium category.

Many of this year’s project nominees formed extensions and refurbishments. Unibail-Rodamco won the highly contested category Extended/Refurbished Project of the Year for their successful extension of Centrum Chodov in the Czech Republic. IKEA’s highly appreciated Franowo Centrum in Poznan, won in the Best Convenience Store Category.

Other major accolades were given to CBRE Global Investors, which won Investor and Asset Management Firm of the Year, with the jury recognising the firms’ successful investment business in 2017. Highlights included sizeable portfolio deals as well as one of the largest and most complicated transactions of 2017, with the divestment of a portfolio to the CPI Property Group.

The awards, held at the five-star Intercontinental Hotel Warsaw, brought together some 450 top real estate professionals from the major retail market sectors in the CEE region, and were selected by an international academy of jurors, comprised of senior industry professionals, who presided and deliberated over the eventual winners, representing some of the best commercial retail real estate companies operating in the CEE region for 2017.

Retailer of the Year