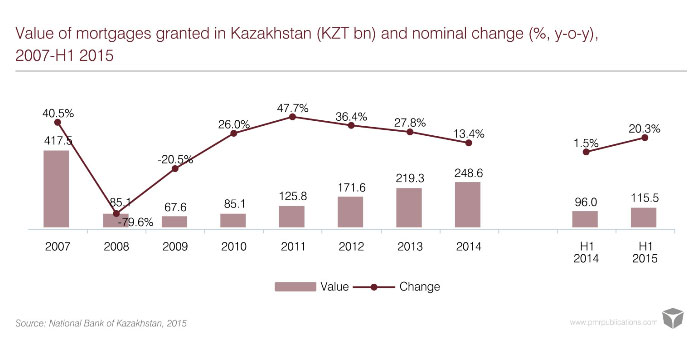 Construction sector in Kazakhstan expanded by 4.6 percent in 2014 – EuropaProperty

The share of new construction as a proportion of total output rose from 82.3 percent in 2012 to 85.1 percent last year, and the proportion is likely to be increased to around 86 percent in 2015. Until 2015, new construction projects had increasingly been rolled out by private Kazakh companies, whereas there had been a reduction in the exposure of foreign and state-owned companies. According to PMR, the market share of foreign contractors is very likely to begin to rise again in 2015, as the total value of construction output generated by foreign contractors in the first half of the year rose by more than 82 percent in year-on-year comparison.

Last year, Kazakh private companies accounted for 84.4 percent of all construction output in the country, and were followed by foreign entities, which accounted for 14.9 percent. State-owned enterprises accounted for an insignificant 0.7 percent of total output. During the first half of 2015, the breakdown changed notably. Private Kazakh firms were responsible for 77.3 percent of national construction output between January and June, worth KZT 937 billion (€4.5 billion) in total, whereas foreign companies saw their market share up to 22.1 percent.

According to PMR, in recent years the most dynamic construction activity has been observed in the residential sector. The total floor area of residential properties activated in Kazakhstan in 2014 came to 7.5 million sqm, which is 9.8 percent more than that of 2013, standing for the record annual housing completion result recorded in Kazakhstan in more than two decades. The uptrend in housing space completion is very likely to continue in 2015, as 24 percent more space was activated across the country in the first half of the year than in H1 2014.

In Kazakhstan, demand for housing has accelerated in recent quarters, mostly because local banks have considerably increased mortgage-lending. The number of property sales increased by 8.0% year on year in January-July 2015, to 93,122. A positive rate of growth was recorded in all but six administrative regions, with the most substantial increase being in the number of transactions recorded in Astana (+69.1 percent), followed by the Mangistau Province (+45.1 percent) and the Akmola Province (+28.1 percent). In the city of Almaty and Almaty Province, there were increases of 6.2 percent and 5.1 percent, respectively.

Kazakh banks are becoming more open to speeding up lending on improving loan portfolios. As indicated by PMR, the share of overdue loans as a proportion of the total outstanding loans in Kazakhstan stood at 19.1 percent in June 2013, and the same proportion was noted in June 2014, but by June 2015 it had eased to 9 percent. The situation in construction is only slightly worse, with overdue loans accounting for 11.3 percent of the total value of the outstanding debts of construction companies in June 2015, in comparison with 37.2 percent in June 2013 and 33 percent in mid-2014.

The Kazakh mortgage market is still not near the level reached in 2007, when the total value of new mortgages granted to aspiring homeowners reached KZT 417.5 billion (€2.5 billion). According to PMR, the record level achieved in 2007 is unlikely to be bettered in the near future, given the reticence of local banks to markedly speed up mortgage lending. Until mid-2014 the share of bad mortgage loans had increased markedly, forcing banks to tighten their lending standards. Although the Kazakh economy increased by 6 percent in 2013 and continued to display encouraging pace in the first half of the year, along with the fact that the CPI fell to 6.1 percent in H1 2014, from 6.5 percent a year earlier, which should typically fuel mortgage lending, the total value of such loans granted to the population in the first half of 2014 was still only 1.5 percent more in nominal comparison than that of H1 2013.

Nevertheless, since mid-2014 the proportion accounted for by overdue payments has been constantly falling as well. In June 2015 it accounted for only 7.9 percent of the total value of outstanding mortgages in Kazakhstan, a 3.9 p.p. reduction over the past twelve months. The last occasion on which a lower proportion was seen was November 2009.