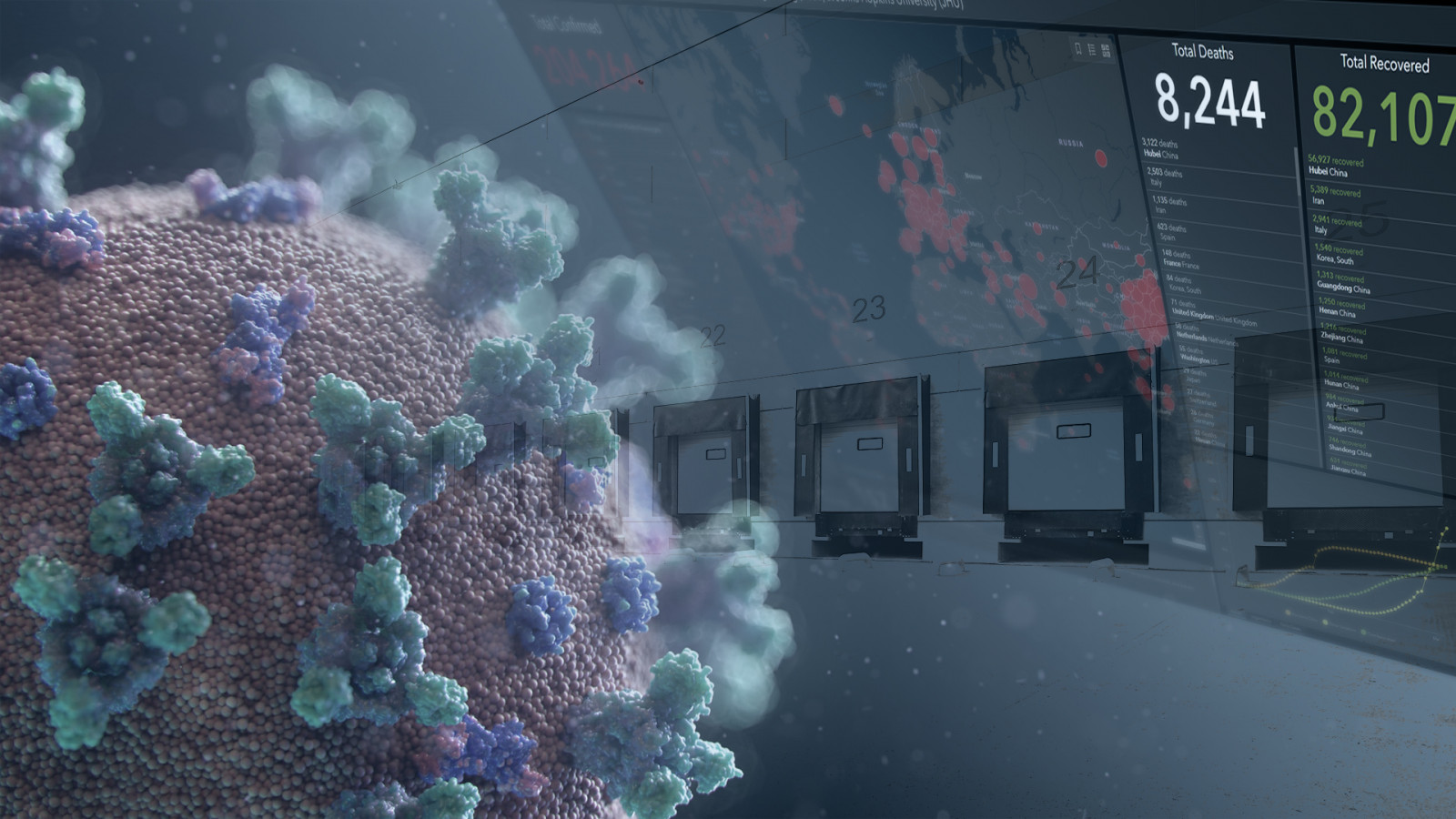 The virus pandemic announced last week by the WHO has undoubtedly a crippling effect on the business and poses major challenges and unexpected obstacles to supply chain management. Nevertheless, as always in such crisis situations, there are also companies that come out unscathed of them, even in a better condition and with innovative solutions. Will the coronavirus be a black swan for the Polish market and let accelerate the fast-growing e-commerce in Poland to the further extend? Analyzes Damian Kołata, Associate, Industrial & Logistics Agency, Cushman & Wakefield.

For the time being, it is certainly too early to name the examples confirming this thesis. We can only quote some press releases of the Polish companies which openly admit that in the first quarter of 2020 the share of e-commerce in total sales will be as high as never before:

Komputronik has recorded in recent days an increase of several dozen percent in the terms of visits in its online store.

CCC Group intensively develops sales in e-commerce channels, which amounted to 25% in the structure of sales revenue in 2019 and almost 45 percent in March 2020 respectively.

LPP expects a large increase in e-commerce sales. The Group will continue and further develop this sales channel, which in 2019 accounted for about 12 percent of the entire group’s sales.

InPost, thanks to the growing demand for parcel services caused by the pandemic, is accelerating the launch of a new service “Parcel in Weekend” enabling deliveries to parcel stations also on Saturdays and Sundays, on a similar basis as on any other day of the week. Due to the coronavirus, from March 12th through the next three weekends (until March 29th) customers who care about urgent sending or delivery of a parcel will be able to use the weekend service without any additional charges – the standard cost of the service is PLN 4.99 gross.

It is also impossible not to mention one of the biggest winners, namely pl, which currently records its weekly sales at the level of monthly one before the pandemic period.

Basing on some examples and Chinese business cases we can however present some “winning on crisis” best practices, not only arising from the current pandemic, but from the SARS 2002/2003 period. The SARS epidemic has been a strong turning point for the budding e-commerce in the Middle Kingdom.

Alibaba was then only celebrating its fourth birthday and its strategy was focused solely on local B2B sales. Nevertheless, with many business trips to China suspended that time, a lot of European companies started looking for online suppliers. As a result, in 2003 alone, the portal grew with 4,000 new customers and 9,000 listed products each day and the recorded turnover was 5 times higher than before the epidemic.

In addition, Jack Ma, founder of the Alibaba Group, decided to start working on the C2C Taobao sales platform to compete with ebay, the contemporary number one in China. A group of 6 people had been working on the project remotely, in their homes. Within two years, Taobao became the first choice of Chinese consumers and dethroned ebay.com, reaching a GMV of 3 trillion yuan in 2019, the equivalent to $434 billion.

It is also not well known, that SARS, which has held back the development of many stationary businesses, forced certain Richard Liu to establish an Internet company. He turned than a small chain of electronics stores (12 brick and mortar points in Beijing, opened in 1998) into JD.com, which today ranks among the largest Internet companies in the world and is valued at $38 billion. This year also started promisingly for JD.com. One only need to mention that only e-grocery sales increased by 215 percent compared to the previous year.

Development opportunities for companies during the pandemic

The examples of Alibaby, Taobao and JD.com, already well-established in e-commerce companies, show especially in times of crisis, opportunities for development and expansion should be pursued. Chinese companies are still searching and here are some examples:

Cosmetic retailer Lin Qingxuan was forced to close 40 percent of its stores and directed its employees to remote working. They were given a task to promote the company products in social media. As a result, the company’s sales reached 200 percent compared to the previous year.

Cosmo Lady, the largest lingerie company, after closing its stationary stores, implemented a sales recommendation program for its employees on the WeChat platform. Even the CEO of the company takes part in it, helping to motivate other employees and set a good example.

The chain of “Hema” supermarkets, operating in the omnichannel scheme, has signed a contract with 40 chains of restaurants, hotels and cinemas, taking over their employees to handle orders and deliveries.

Impact of coronavirus on e-commerce

Will the coronavirus pandemic actually change the way consumers behave and increase the importance of e-commerce even more? There are two reasons for this. Daniel Zhang, CEO of Alibab has already called the pandemic a black swan. This is because, despite the huge level of saturation of the Chinese market with various e-commerce formats, in the last quarter of 2019 alone Alibaba recorded 38 percent growth compared to the same period last year. This allowed to achieve a turnover of 23 billion dollars

The situation is similar in the USA. Amazon is already planning to hire an additional 100,000 employees to its logistics centers and increase wages for all employees by $2 per hour. This step is associated with a huge increase in Internet sales.

In Poland, apart from the examples given at the beginning of the article, so far Google statistics indicates growing interest in online shopping – in opposition to the cautious forecasts of analysts. According to Google Trends, the popularity of the phrase “online shopping” in Poland has increased 20 times over the past week – says Damian Kołata, Cushman & Wakefield’s expert.

How will the coronavirus affect the warehouse market?

Will companies, bearing in mind the problems with deliveries from China, secure not only alternative supply sources but also higher stocks that require additional locations? It is difficult to give a precise answer at the moment. It hasn’t been so long since we have been able to show the real cases or, to put it clearly, the bloomers, comparable to the one that Ericsson had as due to the lack of an alternative source of purchasing. As a result of a fire at a component factory in Albuquerque in 2000 the company lost $400 million and left the mobile phone market for good, giving up leading position to Nokia.

Certainly, consumers who currently stay at home and shop online to avoid the risk of infection will also look more favourably on e-commerce once the pandemic is over. This will lead not only to growth in industries that are already popular (clothing, electronics), but also those that were marginal until the crisis, such as e-grocery, which has a 1 percent share of the total e-commerce – says Damian Kołata.

Transition towards e-commerce will change the perception of logistics and warehouses, which will be increasingly seen as an element of competitive advantage and added value to the company’s offer, rather than a factor to be minimized at all costs. An increasing number of offers will be made to consumers in the form of e.g. the same-day-delivery, which certainly cause operational challenges but also generate additional sales. For example, the Decathlon network launched such deliveries last year and noted a 30 percent increase in the average basket value.

It will therefore be beneficial to be closer to the end customer, enriching the supply chain with mini-hubs and small warehouse units located near the largest urban areas, and expanding large distribution centres with modern automated systems allowing fast picking and minimising employment.

Easy to write – difficult to implement. Nevertheless, steps mentioned above will help companies in strengthening the market position and gaining loyal customers. The winners will certainly be courier companies. It is already predicted that in 2023 KEP operators will handle almost 850 million parcels in Poland (reaching the market value of nearly 12 billion PLN), which represents a doubling of the number of shipments sent in 2017 and an increase of 78 percent compared to 2018.