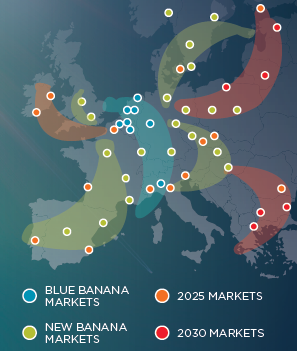 Cushman & Wakefield has released a new report which identifies the important new transportation corridors which will emerge between now and 2030 to support the evolution of the European logistics industry.

The report – ‘The Changing Face of Distribution: The Shape of Things to Come’ – states that Europe’s primary distribution corridor, from the Benelux countries to northern Italy and dubbed the logistics ‘Blue Banana’ due to its distinctive shape, has transformed into multiple corridors in response to EU expansion and new motorway additions.

However, Europe’s logistics corridors are set to evolve further due to factors including: increasing freight volumes, expected to rise by 22% over the next decade; transport costs; labour shortages; and road congestion. Major change is also being driven by eCommerce, new technology, such as the Internet of Things (IoT), multi-modal connectivity and transport networks. In addition, political issues including the UK’s departure from the European Union will have a significant impact.

The new logistics corridors are classified as either new markets, 2025 markets or 2030 markets depending on when they are expected to be fully operational (with some reliant on availability/reliability of infrastructure or the outcome of legal impediments).

The eight future distribution corridors identified by Cushman & Wakefield are:

Original blue banana – Channelling international trade into Europe via the Benelux ports, through the German Rhineland to northern Italy. The growing importance of Mediterranean ports is likely to extend the blue banana to include Genoa, Italy.

Irish corridor – A new short-sea shipping route is being established between the ports of Cork and Dublin in Ireland and the ports of Zeebrugge and Antwerp in Belgium. It’s likely that the small capacity of Zeebrugge port will redirect demand for space to nearby Ghent, Belgium, or even Zeeland, Netherlands.

Iberian corridor – Available skilled and lower-cost labour pools in Spain and Portugal are already attracting German automobile manufacturers. New rail lines and other transport connections mean distribution traffic is expected to increase over the next 5-7 years.

Central Europe corridor – TEN-T motorway and rail developments have already improved distribution along this existing corridor. Should this corridor eventually extend to northern Italy, it may connect to the original blue banana via Bologna and Milan.

North Sea corridor – Distribution along this corridor that connects the port of Hamburg with Copenhagen and Malmo will improve substantially with the 2021 completion of Rodby-Puttgarden tunnel that will be accessible to both lorries and freight trains.

Black Sea corridor – A future distribution corridor that will be connected to the Central Europe ‘banana’ once TEN-T Rhine-Danube rail and motorway network’s branch connecting Budapest with the Black Sea is completed. As a result, Romanian markets such as Bucharest are expected to play a crucial role.

Baltic corridor – The Baltic’s growing importance as a manufacturing location will depend on the construction of TEN-T motorway road and rail networks that will connect this region with Finland, Poland, the Czech Republic and Germany. Significant infrastructure investment is necessary, so this distribution corridor is likely to develop over the long term.

Report author Lisa Graham, Head of EMEA Logistics & Industrial Research & Insight at Cushman & Wakefield, said: “The shape of supply chains is evolving and changing fast. Traditional long-haul transport is reaching breaking point and it’s crucial that all parties work together to ensure the seamless flow of goods into, out of, and across Europe is maintained. Brexit and other external factors are adding pressure on logistics stakeholders to come up with long-term solutions. This is partly why we are seeing an emergence of new logistics corridors, as the EU invests in Europe-wide infrastructure and new technology to reduce costs and improve efficiency.

“By examining key areas for potential evolution, we can see which of these are positioned to take advantage of future distribution patterns. Transportation currently represents around half of total logistics costs and this will rise further if the industry stands still due to motorway congestion, labour shortages and increasing regulations for carbon dioxide emissions.”

Eurostat forecasts that demand for freight transport in Continental Europe will almost triple (182%) between 2010 and 2050. Higher operating costs associated with negative environmental impacts of freight transport – of which most address road (estimated to increase by 40% in 2030 and 80% in 2050) – are putting pressure on companies to adapt their transport modes, supply chains, and fuel sources.

Rob Hall, Chair of EMEA Logistics & Industrial at Cushman & Wakefield, said: “Our future logistics corridors have been drawn with alternative fuels and multi-modal transport in mind. To remain feasible in the future, road transport needs to move towards being autonomous or connected to alleviate motorway congestion and improve safety.

“Making road transport more sustainable is not a debate. By 2030, all primary motorway corridors will need to offer charging stations for alternative fuels and other green technology. The challenge for both public and private sectors is to make these sustainable solutions both financially beneficial and seamless.”

Joanna Sinkiewicz, Partner, Head of the Industrial and Logistics Agency, Cushman & Wakefield, adds: “Cushman & Wakefield’s latest publication focuses on an analysis of EMEA transportation corridors and their development prospects in the coming years. Increasing freight volumes, rising costs, road congestion and labour shortages are key factors driving change in addition to the growth of e-commerce and new technologies. Further development of the Central Europe corridor and the Baltic corridor is particularly interesting from our perspective. Further significant infrastructure investment is necessary, but Poland – benefiting from its favourable location in the central part of the continent, its competitive labour market and a large consumer market – will remain an important link in the European distribution network. This is also driving directly the rapid growth of the warehouse sector as the rising number of logistics centres is improving supply chain processes of many Polish and international firms for which Poland is becoming an increasingly important distribution hub to service European markets.

Further evolution of trans-European transportation corridors will undoubtedly increase the logistics potential of Poland and the entire CEE region, boosting robust demand for warehouse and industrial space. The stronger focus on green solutions in the transport sector will extend to industrial construction. A growing number of logistics projects will be subject to green certification processes such as LEED (Leadership in Energy and Environmental Design) or BREEAM (Building Research Establishment Environmental Assessment Method), helping both to alleviate the negative environmental impact and to bring down property operating costs.”