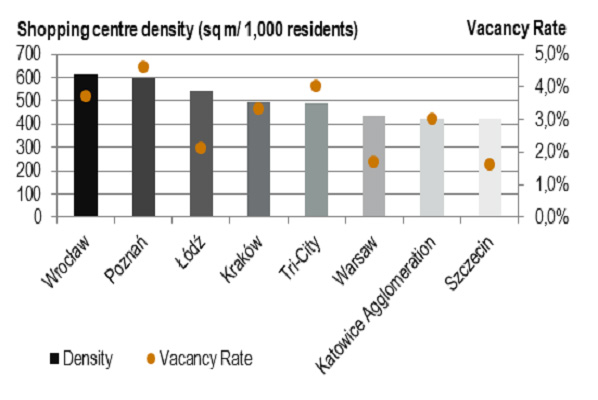 At the end of September 2015, total modern retail stock in Poland totalled 12.58 million sqm and comprised as follows: 8.99 million sqm in shopping centres; 3.39 million sqm in retail parks and warehouses and 0.20 million sqm in outlet centres, according to a summary of Q3 on the Polish retail market by advisory firm JLL.

Anna Bartoszewicz-Wnuk, Head of Research and Consulting at JLL, explained: “The moderate level of completions in Q3 is not surprising, given that most developers usually aim to open new centres in Autumn in order to take advantage of the Christmas shopping season. It should also be noted that the strong retail developer activity continues apace in major Polish agglomerations. In total, 708,000 sq m of retail space is under construction across Poland, with shopping centres accounting for 675,000 sqm.”

Edyta Potera, National Director, Retail Agency at JLL, said: “Redevelopments and refurbishments of existing retail schemes are a crucial element of the strategy that owners and property managers implement for aging objects. These steps result from growing competition and changing customer expectations. In Q3, new space in extensions of Galeria Pomorska, Wola Park and Factory Ursus entered the market. More investments are underway, including Centrum Franowo in Poznań, Morena in Gdańsk and ETC centres in Swarzędz and Gdańsk, which are in the process of redevelopment and refurbishment.”

“The trend of extending restaurant and food ranges in shopping centres is also becoming increasingly visible in Poland. The redevelopment of real estate is partly in line with society’s growing disposable income. Increasing space in order to accommodate more dining and entertainment zones might encourage new international chains to enter the Polish market,” commented Edyta Potera.

“As of Q3 2015, Poland’s shopping centre density ratio stood at 233 sqm per 1,000 residents. We estimate that Poland will catch up with Western European levels of 262 sqm by 2020,” added Anna Bartoszewicz-Wnuk.
Vacancy rates in the major agglomerations range between 1.6 percent and 4.0 percent, with the exception of Wrocław (4,6 percent).

Rents across major agglomerations have remained relatively stable with the exception of Warsaw and Poznań. In Warsaw, prime rents, which refer to units of 100 sqm earmarked for fashion & accessories and located in the best-performing assets, have seen an increase and now stand at €120/sqm/month.

The most significant retail investment transaction concluded in Q3, was Foncièrie Euris and Rallye selling Centrum Riviera in Gdynia to Union Investment with a value in the region of €291–300 million.

Agnieszka Kołat, National Director, Retail Investment CEE at JLL, commented: “The year-to-date retail investment volume stood at over €660million, and has already exceeded 2014’s total of €570 million. There are several other retail investment transactions which have preliminary sale agreements signed with closing scheduled by the end of 2015. Therefore, if these deals close as planned, it is highly likely that this year the total volume of retail transactions will exceed the €1.3 billion registered in the market in 2013.”