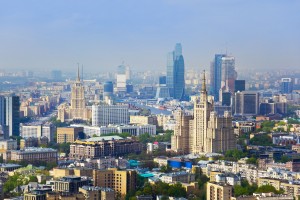 The Russian commercial real estate market will find itself under pressure at least until Q1 2015, according to the latest research from CBRE. Three scenarios of market development are analyzed in the research:

In all three scenarios market balance will remain under pressure from weakened demand. In Q2 2014 the latter was 30-50 percent below levels, which are normally witnessed. It is worth mentioning that increased uncertainty generated the strongest impact on international companies: in normal situations their market share in demand fluctuated within the 25-30 percent range, while now it is just around 10-15 percent.

In the “high uncertainty” scenario, assuming the continuation of “war of sanctions”, take-up volumes in the office segment in H2 2014 might be around 400 – 450,000 sqm. In the industrial and logistics segment this indicator might be around 440,000 sqm. Both forecasts assume that GDP growth will remain positive.

On the contrary, supply in H2 2014 might set up new historical highs in both industrial and logistics and retail segments combined with extensive new deliveries in offices. According to CBRE, newly delivered 1,04 million sqm in industrial and logistics and 320,000 sqm in the retail segment might be witnessed by the end of 2014. In the office market 0,8 million sqm is expected in H2 2014.

In the Russian commercial real estate market formation of imbalance between supply and demand usually initially leads to increase in vacancy, but not to decline in rental rates. In Q2 offices vacancy rate increased from 12 percent to 14,5 percent. In industrial and logistics segment, which is characterized by structural deficit of supply, this indicator grew up from 3 percent to 4,8 percent. Vacancy in retail segment was the most resilient and slightly increased from 2,6 percent to just 2,9 percent.

It is quite obvious, that vacancy rates will continue their growth against the background of high number of new deliveries and depressed demand.

According to the report, by late 2014 – early 2015 in “high uncertainty” scenario office segment will witness 16 – 18 percent vacancy, including that in class A at 26 percent. In this scenario peak of negative pressure is expected to occur in early 2015, when market will have to absorb large volume of new delivery. After this, market balance is expected to start the process of recovery.

In industrial and logistics segment by the end of 2014 vacancy might reach 8 -10 percent. In order to bring this indicator back to 4-5, developers will have to adjust their plans for 2015 to 0,5 million sqm.

In retail vacancy might reach 5 – 6 percent of total stock.

However, despite expected increase in downward pressure on the rental rates, CBRE does not forecast noticeable changes in capitalization rates. They are expected to remain stable in all segments of commercial real estate market. In addition, schemes with low vacancy and long-term structure of leasing agreement will successfully resist against downward pressure on assets prices.

According to CBRE, appearance of positive impulses from the macroeconomic side will not generate immediate improvement in CRE market balance. Though these impulses will contribute into the formation of positive trends on rental rates growth and decline in vacancy, the full strength of these trends is not expected to come until late 2015 – early 2016. However, landlords are expected to become much more reluctant in offering better commercial terms upon arrival of these impulses.

Thus, H1 2015 is in the position to become a “window of opportunity” to fix mid-term low rental rates.

Given 6+ months ahead to assess the market, develop strategy and close deal, tenants should be prepared for possible market bottom around the end of 2014 – beginning of 2015 to agree on mid-term deals at minimal costs. This will raise their chances to fix mid-term low rental rates in their current lease agreements or in the new ones.

Developers are recommended to decrease new construction activity as new projects are unlikely to expand in the next 12 – 18 months due to short / mid-term increase in vacancy in the market. However, despite weakening market balance, projects in good locations with quality concepts even in this difficult market environment will be in demand. Developers should be prepared to start construction of new schemes around the late 2015 – early 2016, as recovering demand can drive reduction in vacancy rate sooner than expected.

Given current sentiments and market situation, late Q4 2014 – early Q1 2015 might become a good time for investment transactions. Prices for stabilized assets with long-term structure of leasing agreements are expected to remain stable. One should not expect substantial discounts for income producing distressed assets, as property owners are much resilient today in terms of debt exposure. Competition between local investors, chasing opportunities, is high. Foreign players are also in the game. Opportunities are likely to arise in new quality developments with leasing risks or properties that require redevelopment or renovation.

Valentin Gavrilov, Director of Research, CBRE in Russia, said: “Despite expected increase in supply-demand imbalance, the commercial real estate market still has a good chance to avoid substantial negative trends in its indicators. To realize them the commercial real estate market needs to witness positive economic growth in 2015. The flow of negative news concerning commercial real estate market indicators is expected to continue until Q2 2015. However, 1-2 strong positive impulses from the geopolitical situation are able to initiate trends on decreasing vacancy and market stabilization. In the worst case scenario tenant opportunities to secure mid-term low rental rates will not be limited by H1 2015 and will extend, following theoretically possible recession in 2015.”