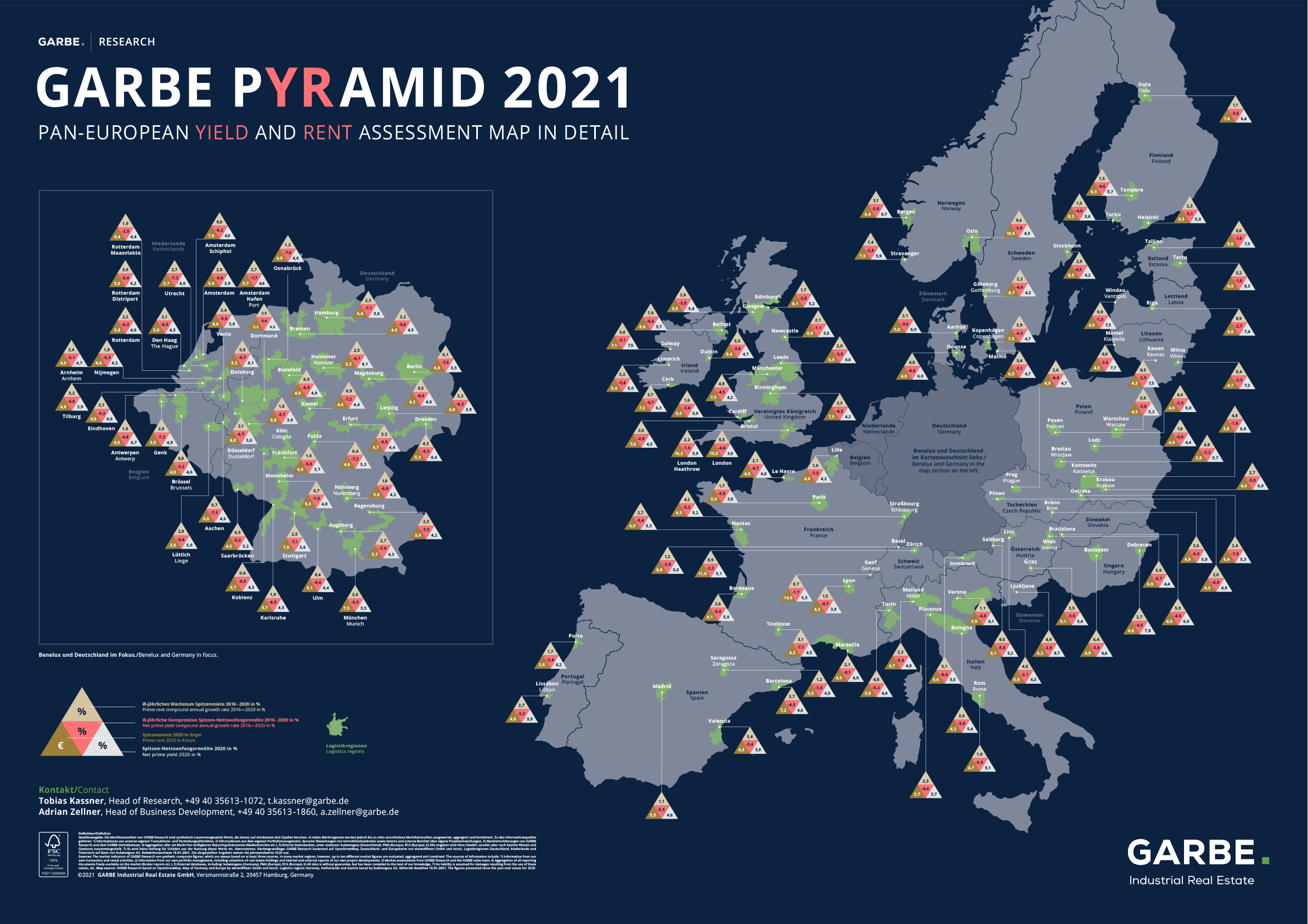 GARBE Research has presented a newly developed yield and rent map for the 123 leading logistics real estate sub-markets in Europe, GARBE PYRAMID. In the future, the map will be re-published at the start of each year to offer updated, detailed and succinct information on prime rents and prime yields as well as their change dynamic. Some of the key takeaways of the current GARBE PYRAMID are the following: Particularly attractive investment opportunities have lately presented themselves in Eastern Europe, Italy and the Nordics. Six of the seven top logistics regions in all of Europe are located in Germany. The lowest prime yields among the 123 European logistics markets analysed were registered in Berlin and Munich. Only the prime yields in London, including Heathrow, compared to those in German regions.

Christopher Garbe, the Managing Partner of GARBE Industrial Real Estate, elaborated: “The number of relevant logistics locations in Europe keeps growing. At the same time, the spread between prime yields is narrowing despite the growing number and despite the differentiation among logistics markets in general, and this is particularly true for Germany. Especially regions that are not part of the core markets and whose logistics markets are becoming successively established show prime yields of up to seven percent and beyond.” Christopher Garbe went on to say: “Emerging markets of this type are becoming very interesting for opportunistic investments. These regions keep gaining significance as a result of the fast growth in online retailing. It makes perfect sense therefore to start taking a closer look at these markets.”

The European context manifests a noticeable yield compression relative to the past five years. Among all 123 logistics sub-markets studied in Europe, the fastest yield compression was identified in Magdeburg, part of the reason being that the city is located in the centre of Germany and has become more and more attractive lately. Other cities that gained in significance as major European logistics markets and experienced a conspicuous yield compression despite the pandemic are Eindhoven in the Netherlands and Lyon in France.

Five of Europe’s seven top regions in terms of prime rents are located outside the euro currency area. This is explained not least by the fact that the wage level is much higher in regions like Geneva or Oslo. The single-highest prime rents are paid in London and its submarket of Heathrow as a major hub of international logistics because massive demand coincides with very limited availability of accommodation or land and with high prices. Brexit and the coronavirus pandemic have actually exacerbated the trend.

“Although rent levels in Europe have generally gone up, not all of the logistics regions benefit equally from the growth. There is plenty of pent-up demand in many regions still, which translates into a large number of attractive investment opportunities in markets like eastern Europe, Italy and the Nordics,” elaborated Tobias Kassner, Head of Research at GARBE Industrial Real Estate. “When looking at the average five-year rental growth, Europe’s second-line logistics real estate markets tend to stand out. The rising attractiveness of the emerging markets, judging by rental growth, is clearly illustrated by the example of Budapest. Within the European logistics real estate context, Eastern Europe, Italy and the Nordics will play increasingly important roles.”