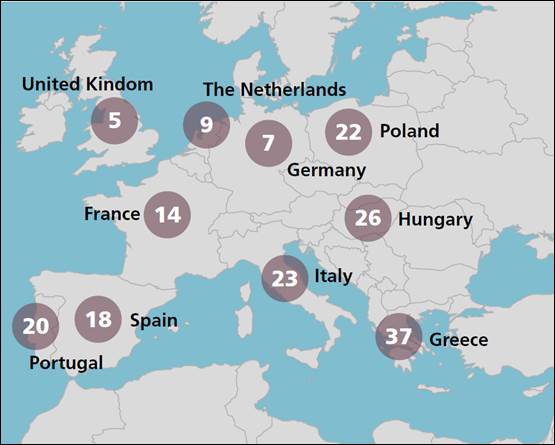 Some Eurozone markets are lagging behind others in their attractiveness to retailers looking to locate their stores, says the ARCADIS Retail Operation Index. The index compares the ease of operating for retailers in 50 international markets. Hong Kong, Singapore and the USA lead the ranking, respectively, while Germany (7th place) and the Netherlands (9th place) are the only Eurozone countries to feature in the top 10.

The Eurozone countries’ performance in the Index are mainly held back by their unfavourable economic environment and capricious consumer demand. The exception seems to be Germany, which ranks sixth globally in terms of expected market demand. A second difficulty for the Euro countries is a bad score for ease of doing business, which covers logistics, and flexibility of labor and business conditions.

On a positive note, Eurozone retailers benefit from high quality infrastructure, with five countries in the top 10. The best in Europe is France which ranks 4th globally thanks to its privately managed highways and extensive high speed rail network. Additionally, Germany and the Netherlands present environments in which business can be set up easily, thanks to local supplier quantity and quality, as well as a freer business climate than in other countries.

John Atkins, Head of Retail Europe at ARCADIS, commented: “The mixed results for Europe show that it is currently a challenging region for retailers to be active in. Retailers will need to carefully monitor market trends and adjust their store portfolio and layout accordingly. In doing so, they will be able to respond swiftly to sudden increases or decreases of sales.”

Continental Europe sees itself outperformed by mature Asian markets, which benefit from an expanding middle class and a governmental willingness to encourage foreign investment. Elsewhere, the UK and US perform strongly, providing retailers with a favourable regulatory environment and strong economic climate, despite their ageing infrastructure which has the potential to impact future prospects. China is ranked 27th, reflective of its lower ease of doing business rating and comparably poorer infrastructure. Nevertheless, as China will surpass the United States as the world’s largest retail market within the next three years, entering the Chinese market will remain a priority for many.