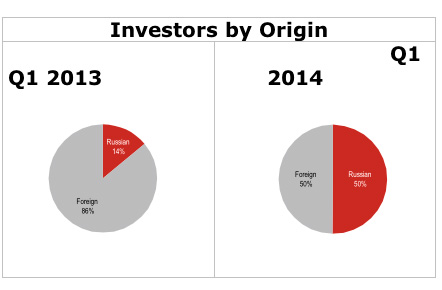 The political and economic uncertainty, which took place in Q1 2014, has had a significant negative influence not only on Russian growth forecasts (according to JLL estimates Russian GDP forecast for 2014 was downgraded to 0.0 percent) but also on the local real estate investment market.

With the economy under pressure and investor sentiment uncertain, JLL analysts have revised down their expectations for investment volumes for 2014 to USD3.4 billion from the USD7.0 billion forecast at the start of the year.

“This downgrade in our 2014 forecast implies that investment levels could be the lowest in post-crisis period and comparable to total investment volumes in 2009 when investment volume reached USD3.2 billion,” commented said Tom Mundy, Head of Research, JLL, Russia and CIS, noted. But there may be some upside if activity increases by July.”

Total investment volume in Russia reached USD472 million in Q1 2014, down 77 percent compared with Q1 2013, according to JLL analysts. It should be noted that this downward dynamics is largely a result of a record high volume in Q1 2013 (due to the sale of Metropolis SEC) and quite a large volume of deals that closed at the end of 2013.

Capitalization rates have also reacted to the current market situation. According to JLL estimates, for shopping centres and offices, rates increased by 25bps to 9.25 percent and 9.0 percent respectively. For the warehouse segment rates remain at 11.0 percent.

As forecasted by JLL analysts, investments into offices dominated the market in Q1 2014, accounting for 46 percent of total volumes, compared to 37 percent in the corresponding quarter of previous year. Retail investments fell to 12 percent of volumes vs. 57 percent in Q1 2013. We note that it is the sale of Metropolis shopping centre that accounts for this rather than a decline in interest in the retail segment in general.

The market remains evenly balanced between Russian and foreign investors with their shares amounting to 50 percent of total investment volume in the first three months of 2014 correspondingly. However, largely because of the uncertain political and economic climate, we expect the share of foreign capital to drop to 10-20 percent of investment volumes by the end of 2014.

Tom Mundy added: “Investors still understand that the fundamental dynamics of the Russian market – meaning that there is a major undersupply of stock in all sectors – are attractive. However due to the uncertainty of the situation in the Crimea and volatility in the currency, investors remain in “wait and see” mode. This increased level of cautiousness will inevitably have an impact on investment volumes in the short term.”