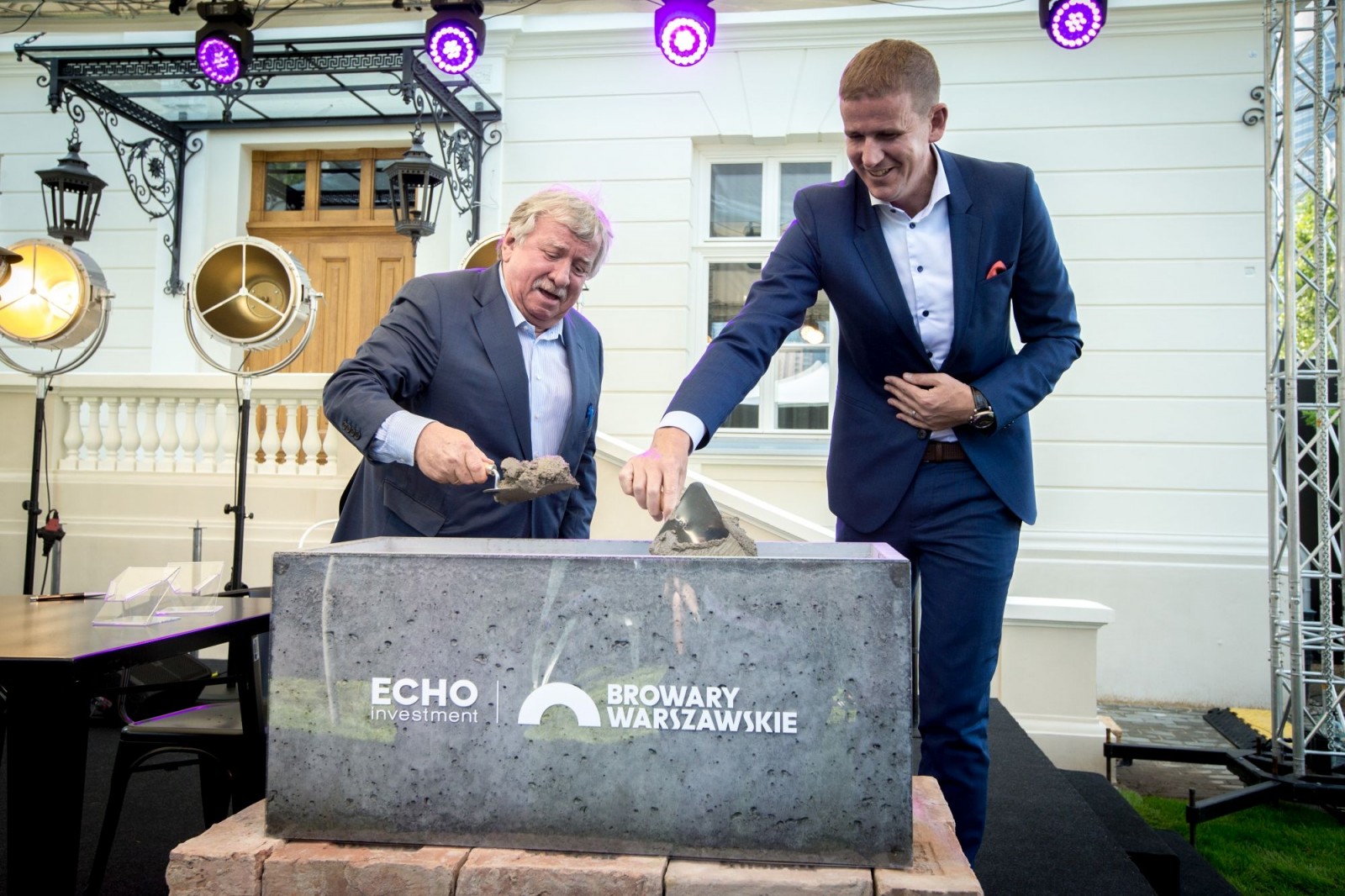 Browary Warszawskie is a harmoniously designed city centre area which combines modern office and residential buildings with the restored historical development of a symbol of entrepreneurship of the end of the 19th century and early 20th century. The symbolic foundation stone has just been laid at the building site in the quarter of Grzybowska, Wronia, Chłodna and Krochmalna streets in Warsaw’s Wola district.

A special capsule which was placed in the foundations of Browary Warszawskie contained small digitalized souvenirs related to the history of the factory founded at the site in 1846, including: scans of labels (not only of beer but also of non-alcoholic beverages that used to be produced here), old advertisements, press publications and securities. There was no shortage of photos documenting everyday work in the breweries and the people who contributed to their success.

Nicklas Lindberg, CEO Echo Investment, said: “We are proud that our company is the one which has an opportunity to create a new fragment of Warsaw which will emanate positive energy – located in the heart of Wola, close to the city centre, full of historical references and inspirations. It is a place where people will be able to live comfortably and move between the buildings and public squares freely. Taking into consideration its scale, the quality of architecture and the variety of functions, it will certainly be a unique spot on the map of the capital city.”

The foundation stone ceremony took place in the vicinity and inside the Factory Owner’s Villa – the first part of the former brewery to have undergone a major renovation.

The developer is also planning the renovation of the brew house and laboratory as well as a large section of historical cellars. The historical development will also gain modern surroundings – five new residential buildings and three office ones. Elements such as the city garden, public squares and streets, which will be surrounded by restaurants, cafes, shops and service outlets, will harmoniously combine the entire assumption and they will open it to the city at the same time.

Olgierd Jagiełło, co-founder and co-owner in the JEMS Architekci studio, which designed Browary Warszawskie, said: “It is a concept which will return this quarter to Warsaw and its residents. While respecting the history and striving at the restoration of the natural continuity of the city development which was interrupted at this site, our design creates frames for a modern, mixed-use urban environment and it responds to varied human needs.”

The completion of the entire Browary Warszawskie project is planned for 2020, but the first few residents are to move into the buildings in just two years.

The first of the residential buildings, which is located the closest to Wronia and Chłodna streets, has reached its base stage and it is starting to go up. Echo Investment has already obtained a building permit for an eleven-storey office building located at the junction of Grzybowska and Wronia streets – the building will include 13,000 sqm of offices and 1,100 sqm of retail and service space. Its construction is to start in July this year. It will be called “Offices at the Gate,” which will allude to the “Brewery Gate” public square that has been designed nearby.