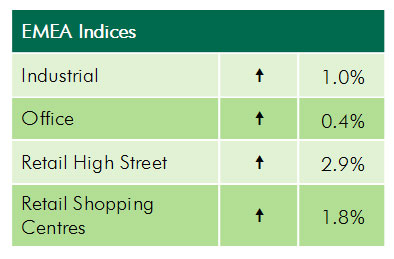 European commercial real estate markets saw further yield contraction in Q2 2015 across all property sectors, reflecting growing investor demand and very low bond yields, according to the EMEA Prime Rents and Yields survey from global property advisor CBRE. Across the total of 163 sector/city combinations throughout the EMEA region, none saw any increase in prime yields over the quarter.

Prime yields fell across all main sectors, to stand at least 30 basis points lower than they were a year ago. The second quarter alone saw yields narrowing by at least ten basis points across all the main commercial sectors, and by as much as 15 basis points in the industrial and logistics sector. This reflected significant adjustments in some of the major hubs including Paris, Barcelona and Milan. Office yields contracted in a number of major markets including London, Munich, Brussels and Paris while several important retail centres also saw yields shifts, including Dublin, Berlin and Milan.

Rental movements remain patchy, with the sector rental indices rising marginally, although more strongly in the retail sector. Notable rent rises over the quarter include the office markets in Dublin, Barcelona and the City of London; as well as the retail sectors in Milan, Rome and Prague.

Richard Holberton, Senior Director, EMEA Research at CBRE, commented: “There has been some recent volatility in European bond yields associated with concerns over Greece and the perception of a possible knock-on effect for a small number of countries in the region. Despite this, spreads between bond and real estate yields remain at very high levels, as does investment demand for real estate, so we expect the downward pressure on prime yields to persist. Evidence of rental momentum, which would further accentuate the downward trajectory in yields, remains limited but is expected to become more widespread over the coming months.”

Office yields across EMEA fell in Q2 2015. The CBRE EMEA Prime Office Yield Index fell by 13 bps in the quarter, and is now 35 bps lower than a year ago. Twenty eight of the 58 markets surveyed saw downward yield movements this quarter, thirty remained unchanged and none rose. The single largest fall was recorded in Brussels, where yields contracted by 50 basis points, while a number of other major office markets saw smaller declines, including London, Paris, Frankfurt, Munich, Stockholm and Milan.

Retail yields also moved lower in Q2 2015, with the CBRE EMEA Prime High Street Retail Yield Index down by 13 bps, and the corresponding Prime Shopping Centre Yield Index down by ten bps, leaving them respectively 42 bps and 34 bps lower than a year ago. Yields fell in 25 of the 54 locations, and remained stable in the remaining 29. The largest changes occurred in Brussels and Lisbon, both down by 50 basis points. Other major retail markets to see downward movements included Milan, Stockholm, Dublin and Berlin.

Industrial yields fell in Q2 2015, with the CBRE EMEA Prime Industrial Yield Index down by 15 bps in the quarter, and 54 bps over the year. Yields fell in 26 locations, and remained stable in the remaining 25. There were 50 bps yield shifts in Copenhagen, Bucharest and Edinburgh, and 25bps falls in a number of markets including Paris, Milan, Barcelona and Manchester.

Prime office rents across Europe rose slightly in Q2 2015, up by 0.4 percent in the quarter and 2.1 percent year-on-year. Office rents rose in eleven locations, fell in three and remained static in the remaining 44. Among the major markets the, most significant increases was in Dublin and Barcelona (both up over 5 percent). Berlin, Stockholm and the City of London also rose. The largest fall was in Zurich (-3.0 percent) with Moscow and Zagreb also declining.

Prime industrial rents rose in Q2 2015, with the CBRE EMEA Prime Industrial Rent Index up by 1.0 percent in the quarter, and 1.2 percent in year-on-year terms. Nine of the 51 sample locations rose, two fell and the remaining 40 stayed unchanged. The largest increases were recorded in the UK, with London and Edinburgh both up by over 7 percent. Zurich, Milan and Helsinki also saw increases, while Gothenburg and Kyiv were the two fallers.

Valentin Gavrilov, Director of Research, СBRE in Russia, said: “Continuation of a trend on decline of yields of European commercial real estate is a logical result of low interest rates on bonds. Current spread between these two assets is very attractive for investors in fixed income instruments. It is worth mentioning, that risks of this kind of investments are increasing along with growing probability of growth of interest rates in the USA and possible slowdown in Chinese economy. Both factor might add negative impact on the European CRE market. However, rental rates in Europe are slightly increasing, reflecting occupiers’ confidence in capability of European economy to overcome current difficulties.

In Russia current yields of prime properties are: in offices – 9,5 – 10 percent, in retail – 9,75 percent – 10,25 percent, in I&L – 12,5-13 percent. It is to large extent explained by faster decline in asset prices influenced by high vacancy and relatively weak demand. Current spread between investments in Russian CRE market and Eurobonds is comparable to the same indicator of the European markets (450 – 800 basis points). Thus, current yield is not a key argument to invest in Russia.

In the next 2-3 years potential of growth in asset prices is estimated at 40-50 percent, driven by recovery after the current crisis. This is the key argument for current investors in the Russian CRE market. Risks are still quite high, but a number of investors are already ready to buy. Investment volumes have been growing 2 quarters in a row. Cross border investors also participate: for example, the recent acquisition of Metropolis Business center by American Hines and the Czech PPF Group.”