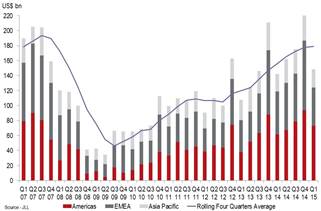 JLL reports preliminary global direct commercial real estate investment transaction volumes have reached US$148 billion in the first quarter of 2015, up 4.0 percent over Q1 2014. The Americas are leading the charge, with volumes up 18 percent over the same period last year. Volumes from Asia Pacific stand just 3.0 percent higher while numbers in EMEA fell by 11 percent in US dollar terms but are 8 percent higher in local currency terms, reflecting the strength of the US dollar against many global currencies currently.

Arthur de Haast, Lead Director, International Capital Group, JLL said, “The United States is the engine that’s powering growth in the Americas with volumes 26 percent higher than last year, compensating for the declines in both Latin America and Canada. The strong dollar is also influencing activity in the Euro Zone, Japan and Australia, where local market activity has increased but whose currencies have all weakened against the US dollar over the past year.” JLL expects total commercial real estate volumes for 2015 to be between US$740 billion and US$760 billion, up 4.0 percent over 2014 volumes.

The Americas continued to lead performance globally with volumes of US$73billion in the first quarter, which is 18 percent higher than Q1 2014. European volumes reached US$51 billion, as most of the countries across the continent experienced volume growth. Central and Eastern Europe (CEE) countries were the outliers, down 20 percent in Euro terms. While the United Kingdom led growth in Q1, pivotal elections on the horizon in the second quarter could have an impact on growth if an uncertain government is formed. In Asia Pacific, markets have started 2015 in similar fashion to 2014, with volumes just 3 percent higher at US$24 billion. Japan, the region’s biggest market, was 4 percent higher year-over-year with over US$12 billion of transactions as the end of the fiscal year encouraged investment.