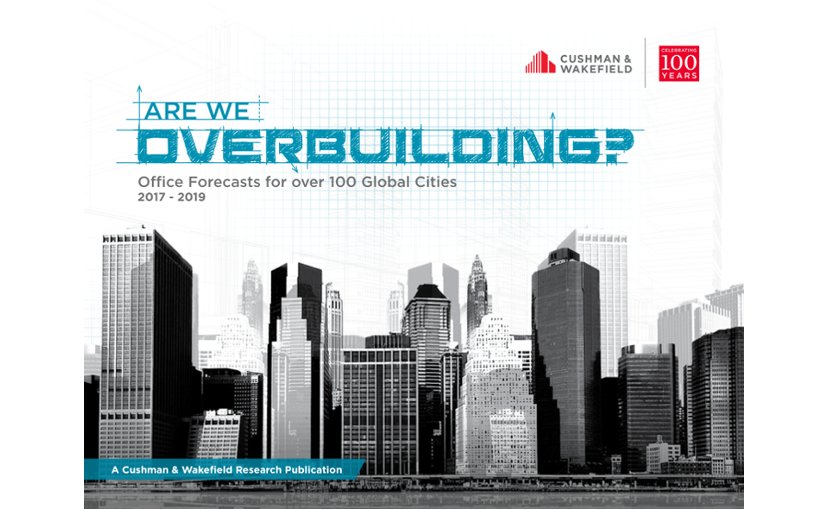 Across the globe, an unprecedented office building boom is underway with more than 700 million square feet (MSF) of space under construction that will deliver between now and the end of 2019, Cushman & Wakefield’s Global Office Forecast reports. That’s the equivalent of recreating five cities worth of office inventory – Washington, DC, Dallas, London, Singapore and Shanghai – over the next three years.

The report details economic drivers, supply and demand forecasts and prospects for rent growth in more than 100 cities around the world.

Although demand, as well as job growth, will remain healthy through 2019, totalling approximately 520 MSF, it will fall far short of supply, which will cause vacancy to rise in most cities around the world. From that perspective, the world is overbuilding.

Or, not. It also has been abundantly clear throughout this global expansion that most occupiers generally favour new, high-quality office space over older, Class B and C product. In the U.S., for example, newly built high-quality space has accounted for 65 percent of all office absorption since 2012. More often than not, developers have been rewarded throughout this cycle for delivering prime product, even in markets where vacancy is elevated. Additionally, the combination of an accelerating global economy with low interest rates is a recipe for healthy office-demand conditions.

Kevin Thorpe, Cushman & Wakefield Global Chief Economist, said: “Developers are certainly placing some big bets on new product, but the bulk of it is concentrated in the major global cities, which is precisely where the greatest appetite is for these shiny new buildings.

“I’m less concerned about the new space leasing up, because in a sense, that is supply rushing to meet demand. It’s giving tenants exactly what they are asking for. I’m more concerned about what this wave of supply means for lower-grade product, which I suspect will have a difficult time competing.”

Much like the supply side, the demand side of the equation is strongest in Asia Pacific. Beijing will have the distinction of leading the world in both supply and demand growth.

The Americas region is also in the midst of a robust construction cycle, peaking in 2017 and tapering off somewhat in 2018 and 2019. Still, the U.S., Canada and Latin America will all build more space than they will absorb over the next few years. Again, it varies greatly from one city to the next, and the bulk of new space is concentrated in the largest cities, many of which arguably need it the most.

Elisabeth Troni, Head of EMEA Research & Insight, Cushman & Wakefield, said: “The development pipeline is also ramping up throughout Europe, but not nearly to the same degree as the other regions. Some key European office markets, such as Paris, London and Brussels, are expected to hit a cyclical high in terms of new construction over the next two years, but vacancy rates are still expected to remain lower than pre-recession levels.

“That said, exact delivery dates for some schemes are tricky to predict given potential developer caution due to the uncertainty surrounding EU Brexit negotiations. The office rental growth hotspots are forecast to include Madrid, Berlin, and Stockholm with Frankfurt, Milan and Budapest also featuring in the top 10. Occupier market fundamentals appear broadly balanced in Europe supporting the next leg of the cycle.”

“Development activity in the Warsaw office market continues on an upward trend reflecting healthy occupier demand,” added Kamila Wykrota, Director, Head of Consulting & Research, Poland, Cushman & Wakefield. “Over the past 18 months over 0.5 million sqm of office space was completed, representing a rise of 10 percent (from 4.66 sqm at 2015 year-end to 5.12 million sqm in Q2 2017).

“Approximately 720,000 sqm of office space is under construction – a volume comparable to the five-year average, which proves stability of the Warsaw office market and is expected to result in stable levels of annual supply over the next three years.”