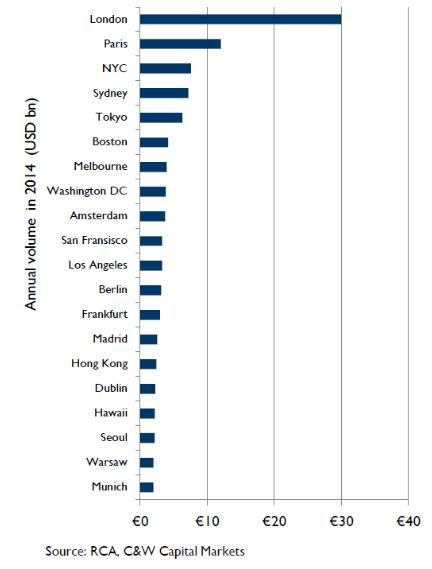 Global real estate investment fell in 2014 for the first time in five years, dropping 6.3 percent to US$1.21 trillion, according to research published at MIPIM by global real estate adviser Cushman & Wakefield.

This decline in activity can be solely attributed to a drop in Chinese land purchasing – however, most of the market is in rude health and set to improve further still in 2015, according to Cushman & Wakefield’s annual global capital markets report International Investment Atlas. Indeed, the report forecasts global investment volumes to rise by 11 percent in 2015 to US$1.34 trillion, led by Europe and the U.S.

Looking back to 2014, the report states that while excess capacity in some parts of the property market and past policy tightening impacted on Chinese investors and developers, excluding China land sales, global volumes rose 9 percent. Asia in fact saw modest growth (1 percent) last year despite these and other tightening measures. Other regions recorded stronger increases, with the Americas ahead 11.4 percent and Europe 11.8 percent. Europe would have led the way more significantly had it not been for the strength of the U.S. dollar.

David Hutchings, head of EMEA investment strategy at Cushman & Wakefield, said: “The 2014 pick-up was better than many predicted this time last year but the 2015 outlook is stronger still, with the brakes now coming off the market. Not only do we have strengthening global liquidity thanks to low interest rates and an expansion in quantitative easing, we also have the start of stimulus measures by China, signs of deeper reform in more markets and an improvement in the fundamentals for the occupier in many areas. Despite the heightened risks we also have to contend with, this all points to the up cycle in global real estate being both magnified and extended.”

Jan-Willem Bastijn, head of EMEA capital markets at Cushman & Wakefield, said: “There’s more risk out there at a global and a local level and core markets will remain in demand as a result. However, interest is already spreading to new locations in search of yield and stock, whether we are talking about the rediscovery of the fringe markets of Europe, the drift to decentralised as well as second or third tier U.S. cities, or the growth in demand for new sectors in Asia. This is going to accelerate in 2015 with alternative sectors going mainstream and emerging markets back on the radar – at least selectively. However, it’s the occupier that investors need to keep an eye on and when the current yield and finance driven bubble starts to fade, it will be those markets and assets that pay heed to changing user needs that actually deliver for investors.”

Warsaw holds 19th position in the ranking of target cities for cross-border investment (investment volume in the capital city in 2014 reached USD 2 billion).

Łukasz Lorencki, senior surveyor in Capital Markets Group at Cushman & Wakefield in Poland, said: “The growth in the volume of commercial real estate investment in Europe is followed by the growth of interest in the Polish market. Last year foreign investors accounted for 91 percent of total transaction volume in Poland and nothing indicates this rate is going to decline. At the same time owing to the falling euro against dollar, we observe a rise in trading activity of American investors such as Starwood, a new player on the Polish market, which has acquired Ghelamco’s portfolio of three office schemes in Warsaw and Katowice, and the Quattro business park in Krakow. The industrial sector is dominated by Prologis, which has acquired three attractive properties, and Blackstone, which purchased two significant portfolios of warehouse and logistics properties.”

EMEA retail property investment volumes are expected to rise 14.5 percent in 2015 to €56.3 billion. Supply levels in general are improving but shortages of quality space will continue to hold back the market in 2015.

Janice Stanton, a senior managing director in Cushman & Wakefield’s U.S. capital markets group, said: “In the U.S., leasing markets were slower to respond to the Fed’s stimulus than investment and finance, but they too are now rising and with supply tightening, growth pressures and development opportunities are emerging in a range of cities and sectors. The initial investment rush for core product in gateway cities has now long since been followed by a second and third wave of capital looking to develop in these same top markets or to spread towards second-tier, decentralised or higher risk markets.”

Looking into 2015, the Americas are expected to perform strongly, with a further rise in activity driven by the U.S., rising values from yield compression and, in the case of the U.S., rental growth as well. Volume growth of 15 percent is forecast for North America and 8 percent in Latin America.

Cushman & Wakefield’s head of Asia Pacific capital markets, John Stinson, said: “Generally, investor demand is robust spurred by rental growth beginning to occur in key markets such as Singapore and Tokyo, as well as the continuing evolution of the region’s REIT markets. Demand for office investment is strongest in core markets. We expect that continued relaxation of monetary policy in China and India to spur activity later in the year. Growth is expected to be higher this year than last – however, it will be variable around the region.

“There will be a diverse range of opportunities as a result, with more still to go for in core markets for rental growth like Japan and Singapore or for those seeking yield in Australia, as well a wide variety of potential higher growth markets led by China and India.”

The Asia Pacific region is expected to see a return of volume growth in 2015, with land markets stable but a steady in-crease for built commercial space pushing overall volumes up by 0-5 percent. Alongside this, further modest yield compression is likely in line with the low level of interest rates and supported by steady rental growth.