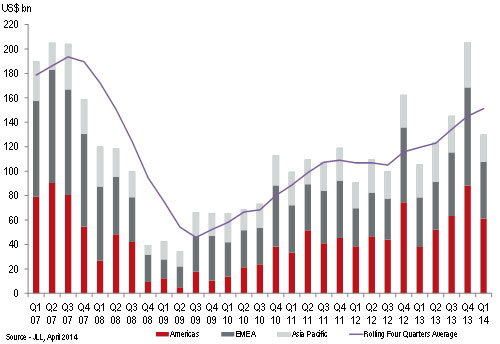 JLL has confirmed that direct commercial real estate transaction volumes globally reached US$130 billion in the first quarter of 2014, up 23 percent on the same period last year.

Arthur de Haast, Lead Director, International Capital Group, JLL said: “The driver of this continued growth in investments is the spreading of activity to more locations globally, partly due to investors looking for greater returns but also due to the increased amount of capital targeting direct commercial real estate. While the major cities of the world continue to see strong demand, the increasing investor interest in secondary and smaller locations that we first reported on 12 months ago has now turned into transactional activity.”

Both the Americas and European markets were up on the same period last year; in the Americas volumes in Q1 increased by 61 percent to US$61 billion, boosted by the surging US market where domestic and foreign capital is joining and competing for opportunities, this saw the first quarter up 63 percent compared to a year ago, in spite of the unwinding of QE policy. The year on year growth also reflects the slower period of transactional activity a year ago when the US market was faced with debt ceilings, changes in taxes and political challenges.

Volumes in Europe are up 14 percent to US$46 billion in Q1 compared to Q1 last year, with the previously illiquid markets of Ireland, the Netherlands, Spain and Portugal all seeing significant growth year on year. Whilst the UK and France were up slightly, activity in Germany was 50 percent higher than a year ago, as major portfolio deals have returned in force, with international and domestic groups seizing on opportunities in Europe’s largest economy.

Asia Pacific, which hit a new record in 2013, has seen a slight reduction in Q1 activity year on year recording US$23 billion of transactions compared to US$27 billion a year ago. However, the first quarter is traditionally the quietest of the year and JLL maintains its expectation for volumes in the region in 2014 to surpass 2013 levels. Japan was an exception as fiscal year-end combined with an increase in sales tax in early April resulted in investors bringing purchases forward into the first quarter, boosting volumes by 17 percent from a year ago.

David Green-Morgan, Director, Global Capital Markets Research at JLL, said: “The continued momentum in investment markets is now being supported by improving occupational fundamentals. With companies feeling more optimistic about the outlook for the global economy they are taking up more space. We are starting to see rental growth in many more markets than 12 months ago, and this is creating increased investor interest in more locations. While global monetary policy remains favourable towards real estate investment, we expect 2014 to be another year of transactional growth.”